Baloch Raaj, The Death of Doda

Pakistani folklore is shaped both by the languages and traditions of the various ethnic groups that make up the population, and by the religious convictions of the people in each region. 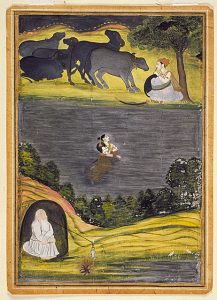 Pakistani folklore encompasses the folk songs, folktales, myths, legends, customs, proverbs and traditions of the four provinces and numerous tribal areas that make up the modern nation of Pakistan. Throughout most of the area’s history, only scholars and administrators were literate; poetry and literature were transmitted orally and folklore and folk tales offered education in religious precepts and moral values, preserved political understanding and history, and provided entertainment. Every village had hundreds of tales and traditions, faithfully repeated by parents to their children and by storytellers at festivals and public occasions. Some folklore was an essential aspect of religious practice, explaining cosmology and the significance of local shrines and deities. Pakistani folklore is shaped both by the languages and traditions of the various ethnic groups that make up the population, and by the religious convictions of the people in each region. Pakistani folklore offers valuable historical evidence of religious and ethnic migrations and of cultural influences.

The region forming modern Pakistan was home to the ancient Indus Valley Civilization and then, successively, recipient of ancient Vedic, Persian, Indo-Greek and Islamic cultures. The area has witnessed invasions and/or settlement by the Aryans, Persians, Greeks, Arabs, Turks, Afghans, Mongols and the British.[1] Pakistani folklore contains elements of all of these cultures. The themes, characters, heroes and villains of regional folklore are often a reflection of local religious traditions, and folklore serves as both entertainment and a vehicle for transmission of moral and religious concepts and values. Some folklore performances are integral to religious rites and festivals.

Folklore is primarily an oral tradition. Each of the languages spoken in Pakistan has a unique repertoire of poems, songs, stories and proverbs associated with its cultural origins. Poetry and literature were preserved orally for centuries before being written down, transmitted from one generation of storytellers to the next. Tales of individual exploits, heroism and historical events were added to the repertoire and faithfully reproduced. The best-known Pakistani folk tales are the heroic love stories that have been immortalized by singers, storytellers and poets, and that continue to inspire modern writers and filmmakers.

Most Pakistani folktales are circulated within a particular region, but certain tales have related variants in other regions of the country or in neighboring countries. Some folktales like Shirin and Farhad are told in Pakistan, Iran, Afghanistan, Turkey and almost all the nations of Central Asia and Middle East; each claims that the tale originated in their land. 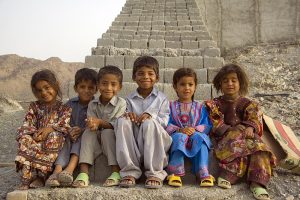 The Baloch or Baluch are a people who live mainly in the Balochistan region of the southeastern-most edge of the Iranian plateau in Pakistan, Iran, and Afghanistan, as well as in the Arabian Peninsula / Photo by Mostafameraji, Wikimedia Commons

The Baloch (بلوچ; alternative transliterations Baluch, Balouch, Bloach, Balooch, Balush, Balosh, Baloosh, Baloush) are an Iranian people and speak Balochi, which is a northwestern Iranian language. They are predominantly Muslim, and have traditionally inhabited mountainous terrains, allowing them to maintain a distinct cultural identity. Approximately 60 percent of the total Baloch population lives in Pakistan in Sindh and Southern Punjab.

Love stories such as the tales of Hani and Shah Murad Chakar, Shahdad and Mahnaz, Lallah and Granaz, Bebarg and Granaz, Mast and Sammo, are prominent in Balochi folklore. There are also many stirring tales of war and heroism on the battlefield. Baloch dance, the chap, has a curious rhythm with an inertial back sway at every forward step, and Baloch music is unique in Pakistan. 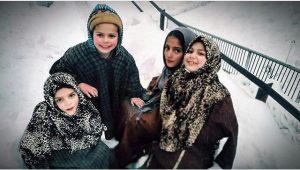 Most of the approximately 105,000 speakers of Kashmiri in Pakistan are immigrants from the Kashmir Valley and include only a few speakers residing in border villages in Neelum District. Kashmiri is rich in Persian words[2] and has a vast number of proverbs, riddles and idiomatic sayings that are frequently employed in everyday conversation. Folk heroes and folktales reflect the social and political history of the Kashmiri people and their quest for a society based on the principles of justice and equality.[3] 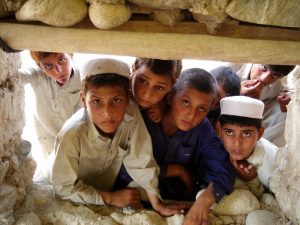 Pukhtuns (Pashtuns (Template:Lang-ps “Paṣtūn”, “Paxtūn”, also rendered as “Pushtuns,” Pakhtuns, “Pukhtuns”), also called “Pathans” (Urdu: “پٹھان”, Hindi: पठान Paṭhān), “ethnic Afghans”,[4] are an Eastern Iranian ethno-linguistic group with populations primarily in Afghanistan and in the Northwest Frontier Province, Federally Administered Tribal Areas and Balochistan provinces of western Pakistan. They are the second-largest ethnic group in Pakistan, and are typically characterized by their usage of the Pashto language and practice of Pashtunwali, which is a traditional code of conduct and honor.[5] Pukhtun culture developed over many centuries. Pre-Islamic traditions, probably dating back to as far as Alexander’s conquest in 330 B.C.E., survived in the form of traditional dances, while literary styles and music largely reflect strong influence from the Persian tradition and regional musical instruments fused with localized variants and interpretation. Pashtun culture is a unique blend of native customs and strong influences from Central, South and West Asia. Many Pukhtuns continue to rely on oral tradition due to relatively low literacy rates. Pukhtun men continue to meet at chai khaanas (tea cafes) to listen and relate various oral tales of valor and history. Despite the general male dominance of Pashto oral story-telling, Pukhtun society is also marked by some matriarchal tendencies.[6] Folktales involving reverence for Pukhtun mothers and matriarchs are common and are passed down from parent to child, as is most Pukhtun heritage, through a rich oral tradition.

Pukhtun performers remain avid participants in various physical forms of expression including dance, sword fighting, and other physical feats. Perhaps the most common form of artistic expression can be seen in the various forms of Pukhtun dances. One of the most prominent dances is Attan, which has ancient pagan roots. It was later modified by Islamic mysticism in some regions and has become the national dance of Afghanistan and various districts in Pakistan. A rigorous exercise, Attan is performed as musicians play various instruments including the dhol (drums), tablas (percussion), rubab (a bowed string instrument), and toola(wooden flute). With a rapid circular motion, dancers perform until no one is left dancing. Other dances are affiliated with various tribes including the Khattak Wal Atanrh (named after the Khattak tribe), Mahsood Wal Atanrh (which in modern times, involves the juggling of loaded rifles), and Waziro Atanrh among others. A sub-type of the Khattak Wal Atanrh known as the Braghoni involves the use of up to three swords and requires great skill. Though most dances are dominated by males, some performances such as Spin Takray feature female dancers. Young women and girls often entertain at weddings with the Tumbal (tambourine). 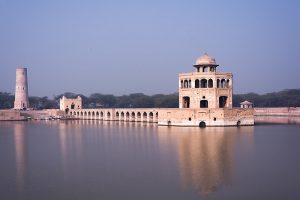 The Punjab region, populated by Indo-Aryan speaking peoples, has been ruled by many different empires and ethnic groups, including Hindus, Jains, Buddhists, ancient Macedonians, Persians, Arabs, Turks, Mughals, Afghans, Balochis, Sikhs and British. The main religions of the Punjab region are Sikhism, Islam and Hinduism.

The heroines of Punjabi folk tales do not pine away, but rebel against the conventional norms of society and sacrifice everything for love. There are four popular tragic romances of the Punjab: Heer Ranjha, Mirza Sahiba, Sassi Punnun, and Sohni Mahiwal. These folktales immortalize and enshrine mortal love as the spirit of divine love. The poet Waris Shah, who versified the tale of Heer Ranjha, elevated mortal love to the same level as spiritual love for God.[8] The tales also portray a double standard of moral and social convictions and the supremacy of love and loyalty. The protagonists are punished with death for flouting social conventions and disobeying their parents, yet their deaths are glorified and offerings are made at their tombs by those who seek blessings and redemption from suffering and unfulfilled desires. 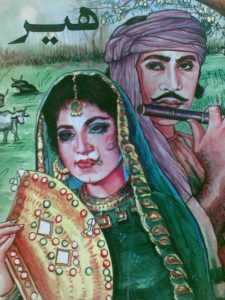 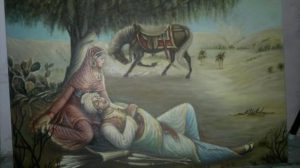 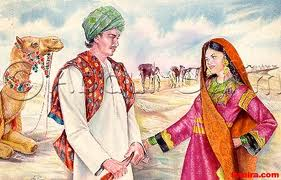 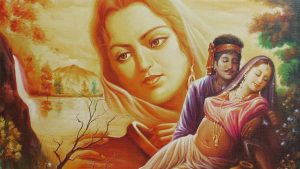 Punjabis enjoy posing riddles and metaphorical questions as entertainment and as a measure of a person’s wit and intellectual capacity. Riddle competitions are mentioned in many Punjab folk-tales. It was once a common practice at weddings to assess the bridegroom’s intellect by posing riddles.[10] 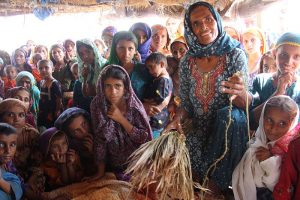 Sindhi is spoken as a first language by 14 percent of Pakistanis, in Sindh and parts of Balochistan. Sindh was conquered by Muhammad bin Qasim in 712 C.E. and remained under Arab rule for 150 years. Sindhi contains Arabic words and is influenced by Arabic language, and the folklore contains elements of Arabic legends. Shah Abdul Latif Bhittai (1689–1752) (Sindhi: شاھ عبدالطيف ڀٽائيِ), a Sufi scholar and saint, is considered one of the greatest poets of the [[Sindhi language. His most famous work, the Shah Jo Risalo, is a compilation of folk tales and legends in verse. The original work was orally transmitted and became popular in the folk culture of Sindh.

The women of Shah Abdul Latif’s poetry are known as the Seven Queens (Sindhi: ست مورميون), heroines of Sindhi folklore who have been given the status of royalty in the Shah Jo Risalo. They are featured in the tales Umar Marvi (Marvi), Momal Rano (Momal) and Sohni Mahiwal (Sohni), Laila Chanesar (Laila), Sorath Rai Diyach (Heer), Sassui Punnun (Sassui), and Noori Jam Tamachi (Noori). The Seven Queens were celebrated throughout Sindh for their positive qualities: honesty, integrity, piety and loyalty. They were also valued for their bravery and their willingness to risk their lives in the name of love. Shah Abdul Latif Bhitai may have regarded them as idealized womanhood, but the Seven Queens have inspired all Sindh women to have the courage to choose love and freedom over tyranny and oppression. The lines from the Risalo describing their trials are sung at Sufi shrines all over Sindh. 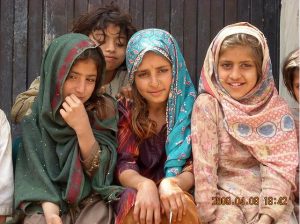 Seraiki in the south is equally rich in folklore. Seraiki is related to Punjabi and Sindhi and is spoken as a first language by 11 percent of Pakistanis, mostly in southern districts of Punjab. Over the centuries, the area has been occupied and populated from the West and North by Aryans, Persians, Greeks, Parthian, Huns, Turks and Mongols, whose cultural and linguistic traditions were absorbed and developed into a unique language rich in vocabulary. Seraiki is rich in idioms, idiomatic phrases, lullabies, folk stories, folk songs and folk literature. Folklore for children is also abundant.[11] The Seraiki language has a distinctive symbolism rooted in the beliefs and teachings of the Hindu Bhakti saints and Muslim saints. Legendary stories take place in the arid plains and stark landscapes of the Thar desert. Seraiki shares many of the Sindh and Punjabi legends, and folk tales, such as “Sassui Punnun” and “Umar Marvi,” of young lovers thwarted by false family and social values, who defy convention by exceptional acts of daring, ending in tragedy.[12]

The Muslim high culture of Pakistan and rest of South Asia emphasized Arabic, Persian and Turkish culture. Islamic mythology and Persian mythology are part of Pakistani folklore. The Shahnameh, One Thousand and One Nights and Sinbad the Sailor were part of the education of Muslim children in Pakistan before English language education was imposed by the British during the 1800s.