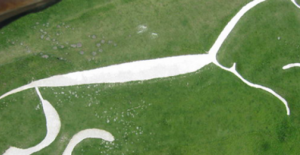 The Celtic tribes were each ruled by their own kings, queens, or chiefs, and were famed for their warrior class, culture, and ornate art, craft and jewelry.

Before about BCE 6,500, Great Britain was still attached by land to mainland Europe. Any notion of England, Scotland, Wales, Ireland, or the United Kingdom was a long way off.

We know very little about the first humans to inhabit Great Britain but we do know that they were nomadic hunters who lived in caves and used stone tools and weapons as part of their everyday lives. Hundreds of such tools, made from bone, antler, and stone have been discovered in places like Gough’s Cave in Cheddar Gorge.

With time, these Neolithic hunters discovered and learned the methods of farming agriculture and livestock and started to build settlements to reside in one place without the need to roam around for food. A great example of where you can see this today is at the remains of the prehistoric village at Skara Brae, inhabited from about BCE 3,200 to BCE 2,300.

As hunter gatherers, every member of the tribe was a food producer but now farming required fewer hands and allowed some people to specialise in other things such as craftwork, trading, tool-making, and eventually metalworking. 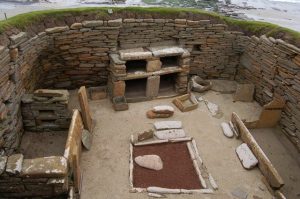 We also know that these early folk were sophisticated in other ways and had knowledge of the movement of the stars and sun. Stone circles such as Stonehenge, built between BCE 3,200 and BCE 1,500, appear to have been constructed to align with the appearance of the sun at the summer and winter solstice.

To this day, the purpose of many of these stone circles, who built them, and how they built them, still remains a mystery. Academics and tourists are drawn from around the world to see them. 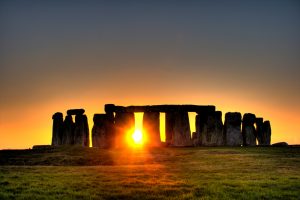 During these early millennia the island of Britain was subject to migration and invasion from mainland Europe of various people including the beaker people and Celtic tribes.

There is much debate among academics as to when Celts arrived in Britain and when Celtic influence started to dominate, although the most commonly accepted time is roughly in the sixth century BCE. By the time that the Roman Empire had started spreading westwards to the shores of Britain, several Celtic tribes had been established on the island. 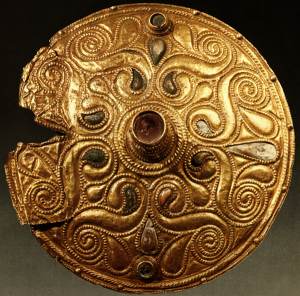 These tribes each established their own small kingdoms, or chiefdoms, and often fought with each other to increase the size of their ‘demesne’ (land in the owner’s possession – similar to ‘domain’) or to raid for resources, such as cattle, gold or slaves.  Examples of Celtic Iron Age forts and settlements can still be seen today, such as Maiden Castle in Dorset.

The Celtic tribes were each ruled by their own kings, queens, or chiefs, and were famed for their warrior class, culture, and ornate art, craft and jewellery. Intricate designs, precious metals and stunning gems adorned their armbands, necklaces, bracelets, and torcs (a large rigid or stiff neck ring in metal and weapons). You can see an examples of intricate Celtic craftsmanship, such as the Battersea Shield, in the British Museum, along with many other artefacts from the era.

You can also see other examples of Celtic art in the British landscape such as the Uffington White Horse, a chalk carving.

The Celts were probably one of the first groups of people to leave a lasting legacy in Britain. Welsh, Gaelic, and Scots Gaelic languages which are spoken in the UK today are derived from ancient Celtic languages and Celtic culture is still celebrated at festivals such as the National Eisteddfod of Wales and Royal National Mòd in Scotland.