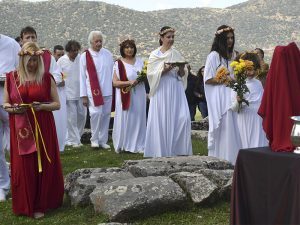 The Supreme Council of Ethnic Hellenes Spring Equinox ritual at an ancient temple of Goddess Artemis in Peloponnese, Greece, in March 2016. / Photo courtesy of Creative Commons

I saw this article on the Religion News Service and thought it interesting. There are people trying to revive the ancient Greek polytheistic religion, as RNS explains, right here in the US (WebCite cached article):

[Article subject Dean] Cameron’s group has 15 members who regularly attend events and prayers, but the Facebook group it maintains has almost 160 members.

Local U.S. Hellenic chapters do not report to any national or international body. Worship is based on word-of-mouth traditions and classic ancient literature, said Cameron.

The Hellenes of Dodecatheon, a loose organizational group, reports around 2,000 followers in the U.S., but 100,000 believers use the traditions as a baseline for their religious practices.

Hellenism is a mainly domestic religion in which prayers and offerings are given in the home. There are designated holidays for different gods, but much of the worship is a guessing game based on scholarly interpretations of ancient text.

“As you can imagine, it’s really hard to find a Hellenic calendar,” Cameron said.

The neopagan movement stems from ancient Greek mythology that centers on religion, philosophy and tradition.

The article explains that this movement began in Greece, the religion’s native country, but due to the influence and power of the Greek Orthodox Church, it’s illegal there.

I’m glad those involved are willing to admit this revival of Greek polytheism is a “guessing game,” because it is. The forms of worship from pre-Christian Greece have — in spite of a wealth of literature, especially mythology, left behind — been lost. It’s interesting, too, that the focus of this revival is domestic. Ancient European polytheism was multi-layered; there were immediate-family rites, extended-family rites, tribal rites, community rites, state rites. These were done in homes, in the wild, in small private sanctuaries, and in magnificent temples. All these approaches could vary considerably. On top of these, and the fact that each state had its own form of religion, there were also the “mystery religions” to which some (in some locales and times, many!) belonged. Those, themselves, sometimes were subsumed as parts of the tribal, community, or state religions. I just don’t see all of that complexity in what these people are doing … but I suppose it could come in time, as more people become part of this movement.

This isn’t the only example of an attempt to resurrect a pre-Christian religion. For example, Asatru is a modern version of the old Norse religion. And there folks who call themselves Druids and want to recreate the old Celtic religion. There are, in fact, lots of kinds of Neopaganism, as well as other things like Wicca, which pretends to be a long-lost pagan religion, but which actually is a modern invention.

What many of these reconstructed/rebuilt/restored/reacquired religions miss, is the underlying approach of the religion. Modern people are looking for spiritual experiences and insights, because they’ve been raised under the influence of a soteriological religious tradition (i.e. of Christianity, and in turn to Abrahamic beliefs). But ancient polytheism was predicated on something very different. It was, in its essence, propitiatory. That is, its rites and customs were intended to curry the deities’ favor and mollify them so they wouldn’t afflict harm on people or even wipe them out. Granted, in classical times, ancient polytheism began to veer toward a deeper “spiritual” approach. This is especially true of the “mystery religions.” But even then, most of these “mystics” still practiced propitiatory rites nonetheless. Any reconstructed religion that doesn’t take this into account, isn’t really a reconstruction … it’s a new invention, but cloaked behind the trappings of an older religion.

I do, however, wish these folk luck in their effort to recreate an ancient religious tradition. I hope they’ll probe deeper into the tradition they want to restore, and move in a direction that’s not anachronistic.

One final pedantic note: I must point out, it’s not entirely anachronistic for people to “invent” new forms of polytheism! This actually happened in the ancient world, probably many times. We know, for example, that the cult of Serapis was, more or less, an invention of the regime of Ptolemy Soter, one of Alexander’s generals, as he took control of Egypt. It was a hybrid cult, joining native Egyptian religious practice with Hellenic traditions. (A deity called Serapis mights have predated Ptolemy’s rule, but he and his dynasty actually built the Serapis cult — and the Serapeum — and made it prominent.)