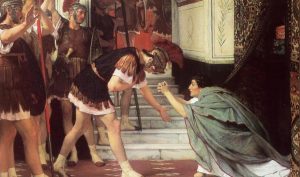 The Praetorian Guards were the personal bodyguards of the Emperors of the Roman Empire. The name was used from the time of the Roman Republic, denoting the protection of Roman generals, which existed from 275 BC.

Praetorians were the guards of the Roman Caesars, developed from a select group of allies, who served in the Republican period for the protection of the commander-in-chief and his praetorium, hence the name cohors praetoria. Scipio African had organized under the same name a guard from the Roman horsemen. The headquarters, the chancery and all the closest suite of the commander or the governor of the region constituted of his Pretorian Guard.

For the protection of order in Rome, Octavian Augustus created 9 Praetorian cohorts, 1,000 each. Outside the service, the Praetorians wore civilian clothes. Three cohorts were posted in the Eternal City, the rest in the suburbs of the capital. Together with the Guards and cavalry, they formed the nucleus of the armed forces of the Empire. Only praetorians had the right to serve in Rome and carry weapons.

Up until the reign of Septimius Severus, only the natives of Italy were enrolled in the guard. Stronger salaries, an honorary position and a 16-year service life (instead of 25-year-old ordinary legionaries) constituted the privileges of the Guards. Subsequently, the city police merged with the guard into one corps, divided into 14 cohorts. Praetorians obeyed a special prefect – praetorian prefect. Prefect of Emperor Tiberius – Sejan, concentrated the whole guard in Rome and built a special camp – castra praetoria. Since the Praetorians were implicated in all the conspiracies and revolts of the Empire, their organization was repeatedly subjected to changes.

The special status of the Praetorian Guard was also emphasized by their appearance. In addition to the Emperor and his family, only the Guards had the right to use “imperial purple” as the distinctive color of clothes and accessories of equipment.

The armor and weapons of the Praetorians were particularly luxurious. In the heyday of the Empire (1st-2nd centuries CE), a set of helmets with a movable forehead and a fluffy hair (feather) crest, as well as a “muscular” cuirass ( metal shell, repeating the contours of the athletic male torso), put on top of a leather pantograph with pterygiums on the shoulders and hips. Above the suit, the Praetorians wore an extra tunic that protected the metal from the sun and rain.

As the reliefs of the Trajan column show, in cases where the Praetorian Guard accompanied the Emperor in military companies, the Legion segmented armor and the standard legionary helmet of the imperial type were used as armor. As a shield, the Guardsmen used a rectangular scutum with a circular umbon in the middle and a somewhat archaic oval shield of the Republic era with a vertical edge. The outer side of the shield was decorated with images of the lightning from god Jupiter, crescents, and stars. Armament consisted of a sword (gladius), a dagger and a throwing spear.

Equestrian praetorians (cavalry) wore chained or scaly armor and special flat hexagonal shields with a scorpion (the sign of the Praetorian Guard, introduced under the emperor Octavian Augustus) and the winged lightning of Jupiter. For the helmets, they used special ones made for cavalry. As a weapon, they used a long sword, adapted for cutting from a horse (spata) and a lance (lanceum). Also often they were armed short throwing spears, worn in a special quiver, attached to the saddle.

The standard (flag) of the Praetorian Guard (Signum) differed from the normal legions by the presence of the images of the winged goddess of Victory, the Scorpion, and also the Emperor and his family members. The trumpeters wore lion skins over their helmets (bear and wolf were used in the legions, only the lion skins were used to indicate their special status).

Coups by the Praetorian Guard

Abolition and Impact of the Guard

The name of the Praetorians became a synonym for intrigue, conspiracy, infidelity, and murder, but in the first two centuries of our era, they provided a great service to the Roman state. At this time, they overthrew (or tried to overthrow) cruel, weak and unpopular Emperors, supporting only the strong and popular. Defending them, they expanded their power, restraining the riots of the Roman crowd and intrigues in the Senate. The Praetorian Guard granted the Empire stability, contributing to the Pax Romana period.

Only after the reign of Marcus Aurelius, the Guard began to turn into merciless mercenaries, which caused a negative attitude towards them. However, the same emotion was evoked in the people by the dynasty of the Severus, and later, during the crisis of the third century, legions, the Senate and the institution of Emperor was collapsing under the weight of corruption and mismanagement.