A fresh look at museum artifacts fills in a gap in the Asian archaeological record and refutes the idea that an advanced technique was imported from the West by early modern humans.

You probably think of new technologies as electronics you can carry in a pocket or wear on a wrist. But some of the most profound technological innovations in human evolution have been made out of stone. For most of the time that humans have been on Earth, they’ve chipped stone into useful shapes to make tools for all kinds of work.

In a study just published in Nature, we’ve dated a distinctive and complex method for making stone tools to a much earlier timeframe in China than had previously been accepted. Archaeologists had thought that artifacts of this kind had been carried into China by groups migrating from Europe and Africa. But our new discovery, dated to between 170,000 and 80,000 years ago, suggests that they could have been invented locally without input from elsewhere, or come from much earlier cultural transmission or human migration.

Several different species of humans lived on Earth at this time, including modern ones like us. But we haven’t found any human bones from this site, so don’t know which species of human made these tools.

These Chinese artifacts provide one more piece of evidence that changes the way we think about the origin and spread of new stone tool technologies. And intriguingly we made our discovery based on artifacts that had been excavated decades ago.

Archaeologists have identified five modes humans have used to make stone tools over the last 3 million years. Each mode is represented by a new stone tool type that is dramatically different from what came before. The appearance of each new mode is also marked by a big increase in the number of steps needed to make the new tool type.

One of these modes, Mode III, also called Levallois, is at the center of several big debates about human evolution. Levallois tools are the defining features of the archaeological period referred to as the Middle Paleolithic, or Africa’s Middle Stone Age. They are the result of a set of very specific steps of chipping a piece of stone to create similar-sized tools suitable to be shaped for a variety of purposes. These steps are remarkable because they are a much more efficient way to produce lots of useful cutting tools, with minimal wasted stone, compared to earlier technologies.

One of these debates is whether Mode III tools were invented in one place and then spread out, or independently invented in several different locations. Since the world’s oldest securely dated Levallois tools have been found in north Africa from around 300,000 years ago, it’s possible they spread out from there, carried by groups of early humans migrating across Europe and into Asia. On the other hand, finds of similarly early Levallois tools in Armenia and India support the idea of independent inventions of the technology outside of Africa.

Changing the chronology in China 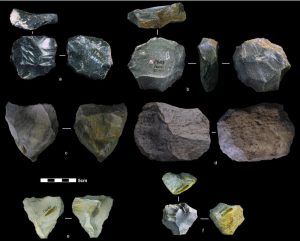 Levallois tools were a leap forward in technology, a new, efficient way to create tools that could cut, scrape, chop and make other types of tools. Hu Yue

In China it has been hard to find evidence of Mode III tools until relatively late in the Palaeolithic period, approximately 30,000 to 40,000 years ago. That’s concurrent with when Mode IV (blade tools) appear there. Ancient people in China appeared to leap from Mode II (stone hand axes) to Mode III and IV at the same time. This suggests that Levallois tools appeared in China when modern humans migrated in and brought these new technologies with them around 30,000 to 40,000 years ago.

Our results support a different story for the origin of Levallois tools in China. At Guanyindong Cave in Guizhou Province in south-central China, we found Mode III tools in layers dated to around 170,000 and around 80,000 years ago. This puts them well before Mode IV tools, and at around the same time that Levallois were the main tools used in Europe and Africa.

One major implication of our new early ages from Guanyindong Cave is that the appearance of Levallois tools in China is no longer tied to the arrival of modern humans and Mode IV tools 30,000 to 40,000 years ago. Instead, Levallois tools could have been invented locally in China – maybe by a different human species. Another possibility is that they were introduced by a much earlier migration, perhaps by the people whose teeth have been found in a cave in Daoxian, Hunan Province, who lived between 80,000 and 120,000 years ago.

Going back to Guanyindong Cave 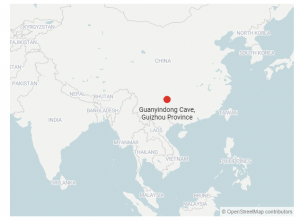 Archaeologists re-examined and re-dated artifacts originally excavated from a cave in south-central China in the 1960s and 1970s. / The Conversation, Creative Commons

Our discovery is a little unusual because we didn’t do any major new excavations. All of the stone tools we studied had been excavated from Guanyindong Cave in the 1960s and 1970s. Since that time Guanyindong has been famous as one of the most important Paleolithic sites in South China because of the relatively large number of stone tools found there.

Most are stored at the Institute of Vertebrate Paleontology and Paleoanthropology in Beijing, and our team spent a lot of time carefully inspecting each tool to identify the traces that reveal how it was made. It was during this painstaking analysis of the museum specimens that we encountered a few dozen Levallois tools among the thousands of artifacts in the collection.

During the previous excavations at Guanyindong Cave, researchers had used uranium-series methods to date fossils found in the sediments. This technique relies on the radioactive decay of tiny amounts of uranium that collects in bone shortly after it is buried to come up with an age range for its burial. But it’s hard to precisely determine the true age of bone using this method. At Guanyindong these uranium-series ages span a wide range, from 50,000 to 240,000 years ago. Also, the association between the dated fossil pieces and the stone artifacts was not recorded in detail. These problems meant that we couldn’t work out what layers the dated fossils came from, and if they were close to any of the Levallois stone tools.

Using only information available from the previous excavation, we couldn’t be sure of the exact age of the Levallois tools in the museum. The dates were important to nail down, because if they were older than 30-40,000 years, then they could be the earliest Levallois tools found in China. 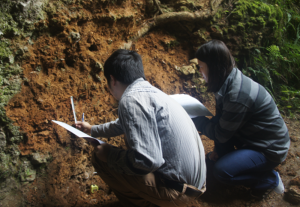 Bo Li and Hu Yue collecting sediment samples from the same layers the stone tools had been in, in order to redate them. Weiwen Huang

To uncover the true age of these Levallois tools, we made several trips to the cave to collect new samples for dating. It was challenging to find a suitable location to get the samples because the previous excavations didn’t leave much behind and much of the site was covered with thick vegetation.

We collected our new sediment samples from places where artifacts were still visible in the wall of the excavation, so we could be sure of a close connection between our samples and the stone tools. Essentially we were trying to collect new dirt from the spots where the museum artifacts had originally been excavated. The plan was then to test the samples with more advanced dating techniques than had originally been available.

Back in the lab, we analyzed the samples using single-grain optically stimulated luminescence methods. This technique can identify how much time has passed since each individual grain was last exposed to the sun. Dating many individual grains in a sample is important because it can tell us if tree roots, animals or insects have mixed younger sediments down into older ones. After we identified and removed intrusive younger grains, we found that one layer of artifacts dated to about 80,000 years ago. We dated a lower layer to about 170,000 years ago. Our museum work had identified Levallois tools in both of these layers.

With the combination of careful inspection of the museum collection, new fieldwork to collect samples, and a new laboratory method of dating the site, we had uncovered a surprising and important result. These Levallois tools are much older than those from any other sites in East Asia. This suggests a more widespread geographic distribution of Levallois prior to the dispersal of modern humans out of Africa and Europe into Asia.

One reason why it has been so hard to find evidence of the technique in China until now is that the number of people in East Asia during the Palaeolithic might have been much smaller than in the West. Small, low-density populations with weak and irregular patterns of social activitymight make it hard for new technologies to spread and persist over a long time.

We don’t know what species of human made the tools at Guanyindong because we haven’t found any bones. Whoever they were, they had similar skills to people living in the West at the same time. They appear to have independently discovered the Levallois strategy in China at the same time people were making extensive use of it in Europe and Africa.