The views of the Vice President rarely matter too much, unless something happens to the President.

In 1864, Republican Abraham Lincoln chose Andrew Johnson, a Democratic senator from Tennessee, as his Vice Presidential candidate. Lincoln was looking for Southern support. He hoped that by selecting Johnson he would appeal to Southerners who never wanted to leave the Union.

Johnson, like Lincoln, had grown up in poverty. He did not learn to write until he was 20 years old. He came to political power as a backer of the small farmer. In speeches, he railed against “slaveocracy” and a bloated “Southern aristocracy” that had little use for the white working man.

The views of the Vice President rarely matter too much, unless something happens to the President. Following Lincoln’s assassination, Johnson’s views now mattered a great deal. Would he follow Lincoln’s moderate approach to reconciliation? Would he support limited black suffrage as Lincoln did? Would he follow the Radical Republicans and be harsh and punitive toward the South?

Johnson believed the Southern states should decide the course that was best for them. He also felt that African-Americans were unable to manage their own lives. He certainly did not think that African-Americans deserved to vote. At one point in 1866 he told a group of blacks visiting the White House that they should emigrate to another country.

He also gave amnesty and pardon. He returned all property, except, of course, their slaves, to former Confederates who pledged loyalty to the Union and agreed to support the 13th Amendment. Confederate officials and owners of large taxable estates were required to apply individually for a Presidential pardon. Many former Confederate leaders were soon returned to power. And some even sought to regain their Congressional seniority.

Johnson’s vision of Reconstruction had proved remarkably lenient. Very few Confederate leaders were prosecuted. By 1866, 7,000 Presidential pardons had been granted. Brutal beatings of African-Americans were frequent. Still-powerful whites sought to subjugate freed slaves via harsh laws that came to be known as the black codes. Some states required written evidence of employment for the coming year or else the freed slaves would be required to work on plantations. 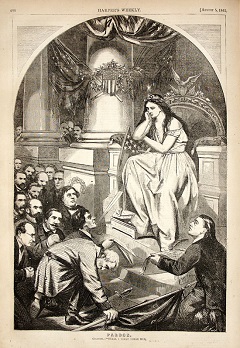 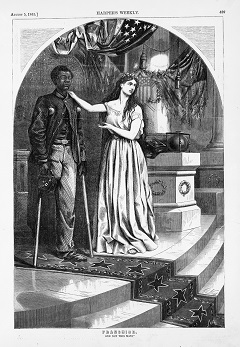 These cartoons by Thomas Nast show Colombia (a personification of the U.S.) granting pardons to high-ranking Confederate leaders (which allowed them the full privileges of citizenship), but denying the vote to a crippled African American Civil War veteran.

In South Carolina, African-Americans had to pay a special tax if they were not farmers or servants. They were not even allowed to hunt or fish in some areas. Blacks were unable to own guns — and even had their dogs taxed. African-Americans were barred from orphanages, parks, schools and other public facilities. The Freedman’s Bureau, a federal agency created to help the transition from slavery to emancipation, was thwarted in its attempts to provide for the welfare of the newly emancipated. All of these rules resulted in the majority of freed slaves remaining dependent on the plantation for work.Andrew Johnson’s policies were initially supported by most Northerners, even Republicans. But, there was no consensus as to what rights African-Americans received along with Emancipation. Yet a group of Radical Republicans wanted the rights promised in the Declaration of Independence extended to include all free men, including those who were formerly slaves. A political power struggle was in the offing.