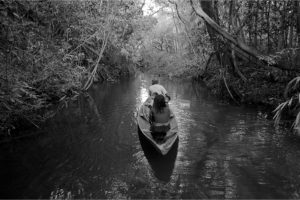 Numbers do not exist in all cultures. There are numberless hunter-gatherers embedded deep in Amazonia, living along branches of the world’s largest river tree. Instead of using words for precise quantities, these people rely exclusively on terms analogous to “a few” or “some.”

In contrast, our own lives are governed by numbers. As you read this, you are likely aware of what time it is, how old you are, your checking account balance, your weight and so on. The exact (and exacting) numbers we think with impact everything from our schedules to our self-esteem.

But, in a historical sense, numerically fixated people like us are the unusual ones. For the bulk of our species’ approximately 200,000-year lifespan, we had no means of precisely representing quantities. What’s more, the 7,000 or so languages that exist today vary dramatically in how they utilize numbers.

Speakers of anumeric, or numberless, languages offer a window into how the invention of numbers reshaped the human experience. In a new book, I explore the ways in which humans invented numbers, and how numbers subsequently played a critical role in other milestones, from the advent of agriculture to the genesis of writing.

Cultures without numbers, or with only one or two precise numbers, include the Munduruku and Pirahã in Amazonia. Researchers have also studied some adults in Nicaragua who were never taught number words.

Without numbers, healthy human adults struggle to precisely differentiate and recall quantities as low as four. In one experiment, a researcher will place nuts into a can one at a time, then remove them one by one. The person watching is asked to signal when all the nuts have been removed. Responses suggest that anumeric people have some trouble keeping track of how many nuts remain in the can, even if only there are only four or five in total.

This and many other experiments have converged upon a simple conclusion: When people do not have number words, they struggle to make quantitative distinctions that probably seem natural to someone like you or me. While only a small portion of the world’s languages are anumeric or nearly anumeric, they demonstrate that number words are not a human universal.

It is worth stressing that these anumeric people are cognitively normal, well-adapted to the environs they have dominated for centuries. As the child of missionaries, I spent some of my youth living with anumeric indigenous people, the aforementioned Pirahã who live along the sinuous banks of the black Maici River. Like other outsiders, I was continually impressed by their superior understanding of the riverine ecology we shared.

Yet numberless people struggle with tasks that require precise discrimination between quantities. Perhaps this should be unsurprising. After all, without counting, how can someone tell whether there are, say, seven or eight coconuts in a tree? Such seemingly straightforward distinctions become blurry through numberless eyes.

This conclusion is echoed by work with anumeric children in industrialized societies.

Prior to being spoon-fed number words, children can only approximately discriminate quantities beyond three. We must be handed the cognitive tools of numbers before we can consistently and easily recognize higher quantities.

In fact, acquiring the exact meaning of number words is a painstaking process that takes children years. Initially, kids learn numbers much like they learn letters. They recognize that numbers are organized sequentially, but have little awareness of what each individual number means. With time, they start to understand that a given number represents a quantity greater by one than the preceding number. This “successor principle” is part of the foundation of our numerical cognition, but requires extensive practice to understand.

Number words and written numerals transform our quantitative reasoning as they are coaxed into our cognitive experience by our parents, peers and school teachers. The process seems so normal that we sometimes think of it as a natural part of growing up, but it is not. Human brains come equipped with certain quantitative instincts that are refined with age, but these instincts are very limited. For instance, even at birth we are capable of distinguishing between two markedly different quantities – for instance, eight from 16 things.

But we are not the only species capable of such abstractions. Compared to chimps and other primates, our numerical instincts are not as remarkable as many presume. We even share some basic instinctual quantitative reasoning with distant nonmammalian relatives like birds. Indeed, work with some other species, including parrots, suggests they too can refine their quantitative thought if they are introduced to the cognitive power tools we call numbers.

The birth of numbers

So, how did we ever invent “unnatural” numbers in the first place?

We speak a decimal language because an ancestral tongue, proto-Indo-European, was decimally based. Proto-Indo-European was decimally oriented because, as in so many cultures, our linguistic ancestors’ hands served as the gateway to realizations like “five fingers on this hand is the same as five fingers on that hand.” Such transient thoughts were manifested into words and passed down across generations. This is why the word “five” in many languages is derived from the word for “hand.”

Most number systems, then, are the by-product of two key factors: the human capacity for language and our propensity for focusing on our hands and fingers. This manual fixation – an indirect by-product of walking upright on two legs – has helped yield numbers in most cultures, but not all.

Cultures without numbers also offer insight into the cognitive influence of particular numeric traditions. Consider what time it is. Your day is ruled by minutes and seconds, but these entities are not real in any physical sense and are nonexistent to numberless people. Minutes and seconds are the verbal and written vestiges of an uncommon base-60 number system used in Mesopotamia millennia ago. They reside in our minds, numerical artifacts that not all humans inherit conceptually.

Research on the language of numbers shows, more and more, that one of our species’ key characteristics is tremendous linguistic and cognitive diversity. While there are undoubtedly cognitive commonalities across all human populations, our radically varied cultures foster profoundly different cognitive experiences. If we are to truly understand how much our cognitive lives differ cross-culturally, we must continually sound the depths of our species’ linguistic diversity.