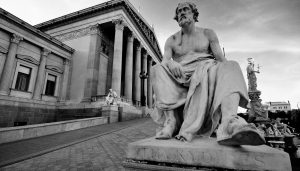 Thus spake Patrick Johnston, Vice Chancellor of Queen’s University Belfast, in a newspaper interview on 30 May this year.

In doing so, he not only proved the old adage that ‘To err is human, but to really foul things up requires Management’, but he also singlehandedly alienated half of his staff, and pretty much the whole historical profession.

Johnston, it must be remembered, was an oncologist before going into university leadership, so he’s one of the Good Guys. He deserves our respect.

His ‘apology’ simply claimed we’d misunderstood him by reading his Actual Words, which suggests he either misspoke, or thinks all historians are idiots who don’t ‘really understand how to analyse things’. Ahem.

So why is he so wrong? Why do we need history and historians? Like you gotta ask. But since you’re here… 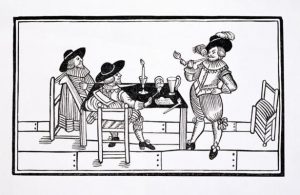 Vintners in a Tudor ale house, from a broadsheet ‘Health to All’, 1642 (woodcut); by English School, (17th century); Stapleton Collection, UK

1. So long as history is part of the public conversation, we’ll always be needed.

Anyone noticed how much politicians and commentators have argued over history of late? Well, who do you think has to call them out on their bullshit? Yep, you guessed it…

Every time Ken Livingstone suggests that Hitler was a Zionist, we need historians to point out that he really, really wasn’t. Every time the Daily Mail gets worked up about a BBC show that has people in the past having sex, we need (it seems) historians to point out that people in the past sometimes did do this. Every time the Guardian goes on a rant about enclosure, or the Telegraph about the constitution, it’s historians who correct them.

We’re custodians of the human experience: a Thin Tweed Line between politicians, journalists, and their abuse of the past. Imagine the chaos if we weren’t there. Unthinkable.

Patrick Johnston’s interview comments were so daft you could fill them with bristles and call them a brush, but the silliest moment of all was probably when he dissed the analytical skills of 6th century historians. Historians? Do analysis? Well. I. Never.

Of course that’s precisely what we do. But it’s more than that. What we analyse is profoundly alien to the modern world, which means we are forced – effectively – to analyse in the abstract. And so, for exactly this reason, the skills of a 6th century historian are probably more useful to the 21st century than those of a modernist.

If people like Johnston had their way, we’d all be learning skills that are immediately ‘relevant’ to the world in 2016. The trouble is, there’s no guarantee that the skills we need today will still be relevant in 2036, or even 2026.

The world is changing. Fast. If you can learn to analyse the distant past, then this explicitly makes you comfortable with the unfamiliar. And if there’s one thing we’ll need to get familiar with in the coming decades, it’s the unfamiliar.

And sure, there are other ways of learning abstract skills, but some people just like the 6th century. This is where their passion lies. They find it more fascinating than geography, or sociology, or 16th century history. I mean, perish the thought you might find something of interest in the century of Empress Theodora, the Justinian Plague, Aryabhata and the Prophet Muhammad… 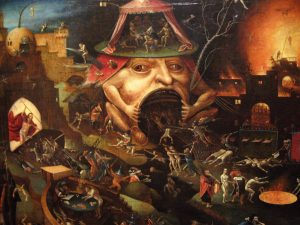 3. … which brings me to my next point: History is interesting.

There is a huge, huge market for history. Everyone who reads Wolf Hall, who watches Roots, who visits a National Trust property, who researches their family tree, or even who looks at an old cottage and thinks, ‘ooh that’s tremendously interesting’, is consuming history. I don’t know what the subject contributes to GDP, I suspect it’s not even measurable. But I do know that the subject, and knowledge of it, contributes vast amounts to people’s enjoyment of and interest in the world. Historians facilitate this. Without this, we’d all be immeasurably poorer. And that’s to say nothing of the artists, the novelists, the filmmakers, even the musicians, who’ve been inspired by knowledge of the past.

I’m sticking my neck out a bit here, but I suspect that our contribution to human happiness doesn’t compare completely unfavourably to that of University Vice Chancellors.

4. And finally: history is Important.

There’s a famous quotation by George Santayana which annoys me a bit. It annoys me because I don’t actually think history repeats itself. There’s been a long, complicated story of social, cultural, and political change which means that no past situation is ever truly analogous to one today. Learning the ‘lessons’ of the past can be dangerous. Just because the Germans got bogged down in northern France in 1914, didn’t mean they would again in 1940.

But… history’s all about comparisons. They that know only the present, do not the present know. If we only look at our own world, we won’t notice the way some things are unusual to  it. We might think that something about us is ‘natural’, ‘common sense’, or ‘only human’, whereas in fact it’s historically distinctive. We only learn this stuff by looking at other, distant, alien societies. In fact, maybe 6th century historians can tell us more about ourselves than many 21st century commentators and ‘leaders’ can.

And not only this. History isn’t the study of the past. It’s the science of humanity. All, literally all, human experience, literally everything Homo sapiens has ever done, is contained in the past. History is our curriculum vitae and our criminal record as a species.

Historians are essential. And I reckon we’ll be here long after university managers have joined the ranks of astrologers, alchemists and pardoners as relics of a distant age.