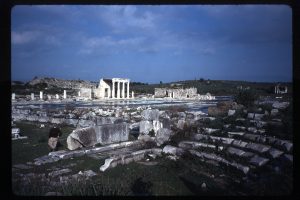 A general overview of the ruins at Miletos / Photo by John Hansen, Wikimedia Commons

It can be argued that this mistake set into movement the events that created and preserved Western culture as we know it today.

It can be argued that this mistake set into movement the events that created and preserved Western culture as we know it today. This is why it is included here a bit out of chronological order. The world as we know it today all began with a very bad judgment made by the tyrant of the Ionian city-state of Miletus. His name was Aristagoras, and his mistakes began a chain of events that are still being played out today. The city of Miletus was located on the eastern coast of the Aegean Sea, in an area known as Ionia. That entire coast was controlled by Persia, and the tyrant and his city owed both allegiance and taxes to Darius I.

To understand Aristagoras’ mistake you need to take a look at the world as it was in 499 BCE, more than 2,500 years ago. The fastest means of communications was a message sent by horseback, and it took weeks for communications from Darius I to reach a distant city such as Miletus. It also took months for Darius to raise an army from the heart of the Persian empire and march it to a distant satrapy, a Persian province, such as those on the Aegean coast. Miletus was in the boonies, the far end of the empire. What this meant in practical terms was that the tyrants, men in absolute control of an area or city for Darius I, operated on their own as kings, called satraps.

There was also a lot of competition among the Persian satraps. Everyone wanted to look good so that they could be promoted to more prestigious and comfortable positions in the capital of Babylon. The problem for this particular satrap was that Greek Aegean cities like Miletus were neither important nor prestigious. Men such as Aristagoras needed to do more than just be competent to get noticed; they needed to do something spectacular that attracted the attention and approval of a distant emperor. Only then were they given more control of a richer and more important satrapy or even a coveted position in the Babylonian court.

Off the coast of Ionia, in the Aegean Sea, is the island of Naxos. This island had on it a city-state in what we would call today the sphere of influence of Persia. Darius had appointed a tyrant to rule in his name and collect taxes. Yes, even at the dawn of civilization it was all about taxes. But being farther from the center of the Persian empire than even Miletus, the men of Naxos felt that they could throw out the tyrant Darius has assigned, and the island was too far from the capital for him to react. So Naxos declared its independence and executed the satrap. Being separate and independent lowered their taxes and gave the city’s merchants more freedom to trade where they wanted. Those economic considerations were the more likely source of inspiration for the revolt rather than any philosophical need for freedom or democracy as we think of them today. At the time, the rights of men or the right to rule were vague concepts at best, but self-interest was just as strong a motivator then as now. 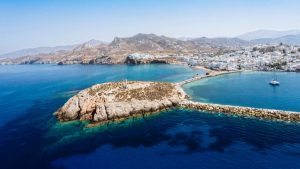 Aristagoras saw this nearby revolt as an opportunity. If he could recover Naxos for Persia, that might earn him some real credit with Darius. At a minimum, he could add the island to his satrapy, increasing his own importance and tax revenue. But the tyrant of Miletus had a problem. He could raise an army, but Naxos was an island, and he had no ships with which to transport his men to Naxos. To solve this problem, he cut a deal for the loan of the fleet controlled by the satrap of the larger and richer Lydia. This deal had a double advantage. That satrap, Artaphernes, happened to also be Darius I’s brother. His involvement guaranteed that news of Aristagoras’ victory would make it to court. Then the tyrant hired one of the top admirals of the day, Megabates. He was an experienced and proven commander for the expedition. It was a good move right up until Aristagoras publicly insulted the seaman. In revenge, Megabates warned the citizens of Naxos that the invasion was coming. The island armed and prepared its defenses and put away food supplies, so that by the time Aristogoras’ ships arrived, the islanders were more than ready to deal with the invading soldiers. After four months of frustration and defeat, Aristagoras and his army were forced to retreat back to Miletus.

This created a very serious problem for Aristagoras. In exchange for the use of his fleet, the tyrant of Miletus had promised the brother of the emperor a large portion of spoils from Naxos. He had also agreed that after he conquered Naxos, he would use the same army to assist in the conquest of the city of Euboea and the area around it for the Lydian satrapy. But having failed to conquer Naxos and with his army crippled, Miletus was in no position to conquer anyone else, and he had no loot to divide. This put Aristagoras in a very difficult situation. He had made these promises to Darius’ brother, not just another local leader. The probable result of his military failure on Naxos was going to be, at the very least, exile and most likely execution—in a very unpleasant manner.

Aristagoras must have been a tremendously persuasive speaker. Knowing he was going to suffer at the hands of the Persian empire, he convinced the people of Miletus to revolt against Persia. Cultural differences and distance may have helped. The people of Miletus were culturally Greek and had more ties to and trade with the cities of Greece than to distant Babylon. Then the soon-to-be-former tyrant of Miletus was able to convince a few of the other former Greek colonies ruled by Persia, also on the eastern Aegean coast, to join in and follow his leadership. His success in persuasion was even more impressive considering that the whole situation followed from Aristagoras’ being unable to crush an identical revolt by the Greek-speaking people of Naxos.

As the new leader of the Greek revolt, Aristagoras then looked for allies. He offered gold and trade rights in order to entice assistance from cities on the Greek mainland. Sparta turned him down, but Athens and Ephesus decided to support the revolt. There had to be some element of pride or financial benefit for this, considering that the Persian empire was unrivaled in power and size at that time. It is the equivalent today of Italy offering military support to the residents of Bangor, Maine, in a revolt against the United States. A tremendous mismatch at best. Still, two of the leading cities of Greece sent ships and soldiers to Ionia. 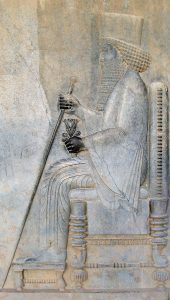 Relief of Darius I in Persepolis / Wikimedia Commons

Even though he wanted to assist his brother, there was nothing Darius I could do quickly. It took time to gather an army and even more time to march it halfway across his empire. A joint Ionian, Athenian, and Ephesian army marched on Sardis, the capital of Lydia, ruled by Artaphernes, the emperor’s brother whom Aristagoras had stiffed after his failure. The Greeks and rebels managed to surprise the city and were inside before an effective defense could be offered. Artaphernes and his soldiers retreated into the Citadel, a castlelike area in the center of the city, and held out. The Greek and Ionian army then pillaged the rest of the city. The Greeks set Sardis on fire, and the brother of the Persian emperor could do nothing but watch as his capital burned around him.

Not long after Sardis lay in ashes, Darius I’s army arrived to assist his brother. It managed to catch the retreating Greek army and quickly defeated it. They killed or enslaved most of the rebels, including Aristagoras. Only the Athenians were able to escape this fate by hurriedly boarding their boats and sailing back to Athens.

The Persian emperor and his family never forgot what the Athenians did. Up until then, the Greek cities had been considered too poor and too remote to be worth conquering. The burning of Sardis had dramatically demonstrated that the Greeks should be considered a threat to the Persian empire, and the Persian empire could not and did not tolerate threats.

If Aristagoras had not overreached himself, insulted his admiral, and then led a revolt to save his own hide, it is quite possible that Persia would not have paid much attention to the relatively poor and small Greek cities beyond that empire’s border. If Athens had not meddled in another country’s revolt, then the world would be most different. The mistakes Aristagoras made, from insulting his admiral to starting a self-serving and hopeless revolt, began the Greco-Persian wars that included the Battle of Marathon, the famous stand of the 300 Spartans, and eventually Alexander the Great’s conquest of Persia. Without the impetus of the Persian threat, Philip of Macedon might never have been able to unite Greece. Western culture might never have been forced to grow to greatness. The much greater Persian empire could have continued to dominate the Western world for centuries longer than it did, and the world today would look very different. It would have been a world in which the Persian values of subservience to the state and a strong central ruler were more important than the Greek values involving personal rights and pride in individual accomplishments. The world is as it is today all because a local Persian politician, ruling a city at the far edge of the empire, got too ambitious.