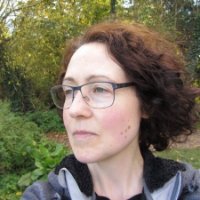 Sex, childbirth and reproductive health were topics of considerable interest to people in early modern England. The Wellcome Library has a substantial collection of different editions of a hugely popular printed work addressing these issues in 17th- and 18th-century England, ‘Aristotle’s Masterpiece’. To people today, the title of this work is confusing, since it was not authored by Aristotle and indeed did not correlate with the ancient philosopher’s thinking. Why did early modern people, like their medieval predecessors, attribute definitive medical and anatomical knowledge to the ancients? Was putting Aristotle’s name on this work akin to adding the words ‘Kama Sutra’ to the title of modern sex manuals? 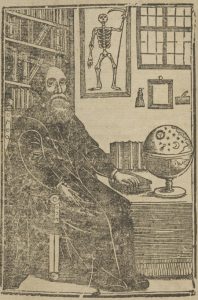 ‘Aristotle’s Masterpiece’, and a group of associated texts also attributed to Aristotle, appeared in numerous printings from 1684 until the early 20th century. In the early modern period, Aristotle was viewed as an authority on sex, explaining this attribution. The Library recently acquired two more editions of the ‘Masterpiece’ to add to its collection, printed in c. 1731 and 1751. For the rare books cataloguer, the different editions are of great interest but also present challenges, since it is not always easy to establish when and by whom a particular edition was printed.

The rare books cataloguer’s job is faithfully to transcribe the title page, describe the physical structure of the book and the subject of the contents, and deduce any missing information or parts by comparison with other copies, editions and bibliographical records. There is a common publishing theme characterising the various editions of ‘Aristotle’s Masterpiece’: the publisher’s name is usually withheld, with instead the blanket statement ‘Printed for the booksellers in town and country’, and often the editions are undated. One edition that is dated is named as ‘the best edition’ instead of being assigned an edition number.

All the editions of ‘Aristotle’s Masterpiece’ are pocket sized, printed on cheap, thin paper, and have many pagination mistakes, indicating that they were produced for the masses. Printers had to cut corners to make the editions cheap enough for the general public to purchase. The bindings are inexpensive plain sheep skin over pasteboard. One copy lacks even endpapers. Printers sometimes changed to a smaller size font of type to squeeze the text into the final gathering, so as to avoid using part of another sheet of paper. This can be seen in one of the Library’s earliest copies of the ‘Masterpiece’. 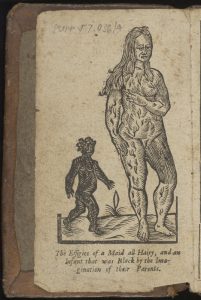 Frontispiece in EPB/Suppl./57036/A: Aristotle’s master-piece: or, The secrets of generation displayed in all the parts thereof (London: Printed, and are to be sold at the Hand and Scepter near Temple-bar, 1692) / Wellcome Library

No new creative work was done for the illustrations in the different editions: the same images appear among the woodcuts in editions printed throughout the 17th and 18th centuries. These include ‘the hairy woman and black boy’, various other monstrous births, and Aristotle with the globe and picture of a skeleton. The images of monsters, including the hairy woman and black child, were copied from woodcuts in earlier printed books, especially the English translation of the ‘Workes’ of the French surgeon Ambroise Paré, published in 1634.

The various editions of ‘Aristotle’s Masterpiece’ reflect the appetite for up-to-date information about sex and reproduction in the later 17th and 18th centuries. Booksellers cunningly played to this demand to drive new sales. They used the title page of new editions to claim addition of the ‘newest discoveries in anatomy’ and ‘new translations from the Greek’, thus belittling previous editions. With each ‘new’ edition, the publishers also changed the selection of texts included in the volume, and altered the wording of the title. The recent acquisition from 1751, for example, comprises the ‘Masterpiece’ as well as the ‘Compleat and Experienced Midwife’, the ‘Book of Problems’, and the ‘Last Legacy’, all derivations from previously published works (none, of course, by Aristotle). 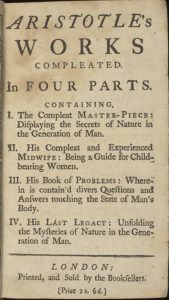 It perhaps appears paradoxical that texts attributed to an ancient philosopher could continually be updated, and that people believed that these writings could reflect the most cutting edge medical knowledge. Nonetheless, the phenomenon of ‘Aristotle’s Masterpiece’ points towards a flexible understanding of authorship and texts in 17th- and 18th-century England. Contemporaries were not necessarily preoccupied with exactly what they were reading, but rather with the usefulness and, sometimes, salacious interest of the material.

Much as the text itself took many different forms, our knowledge of the editions is continuing to expand. Since readers no doubt often discarded earlier editions of the ‘Masterpiece’ when they purchased new ones, it is possible that no copies at all have survived of certain editions. At the same time, however, hitherto unknown editions occasionally still come to light. The Wellcome Library hopes to continue adding to its collection of examples of this printing phenomenon.