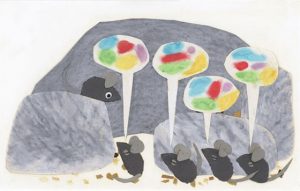 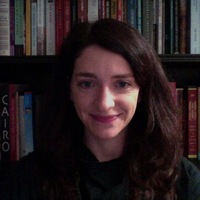 Around this time of year, I often find myself telling people about the mixture of holidays I grew up celebrating as a child. My back-to-the-land hippie parents, one Jewish, one not, both fairly atheist, kept what they liked from their respective family traditions, and added some new ones of their own. My brother, sister, and I therefore ended up with Hanukah gelt, Christmas stockings, and a Solstice tree.

This winter, in the face of Trump, I have been thinking about the Solstice tradition my parents invented. Solstice, for my parents, an educator and an artist, was about the return of the light, and art as light. We had a Solstice tree, which was quite similar to a Christmas tree, except that there was mouse finger puppet on top, instead of an angle or a star. And who was the mouse? Frederick—named after the mouse in Leo Lionni’s children’s book of the same name.

In the book, while his fellow field mice are hard at work gathering food for the winter months, Frederick instead spends his time gathering colors and warmth. During the long winter months he then keeps his fellow mice entertained by telling them stories about the colors and abundance of summer. It is a beautiful story about the importance of storytelling, poetry and art. Give us bread, but give us roses. It is art that sustains us in the darkest of times. We read Frederick every winter solstice, after having a “picnic” in the living room, with lot of candles and a lemon meringue pie (symbolic of the return of the sun) and then we exchanged art supplies. Creativity would get us through the long winter to come.

My relationship to these kinds of made-up rituals is complex. Thanks, in part, to the hodge-podge of traditions I grew up with, along with my deep bond with my Jewish grandparents, I ended up pursuing a Ph.D. in Religious Studies, with a focus on Modern Jewish Thought. Marginal within the Jewish community myself, I was drawn to thinking about conversion, boundaries, liminality. Now a (somewhat) hard-nosed academic, I tend to scoff at New Age types. If someone asks me if I have a “spiritual practice,” or intimates that they have an interest in crystals, I shudder.

Like many hippie spawn, I can dine out on stories about my countercultural upbringing until the cows come home. When I bump into someone with a similar background, it sometimes feels like we engage in a subtle one-upmanship: “you were born in a cabin with no electricity, well I grew up on a commune.” But sometimes I choose not to tell those stories, because I am not interested in exploiting the earnest idealism of my parents just to get a few laughs at a dinner party.

My family’s Solstice tradition is certainly wishy-washy and neo-pagan. And I could easily dismiss the Solstice tree as a way for a semi-Jewish family to basically celebrate Christmas without having to actually deal with Jesus. But, when all is said and done, I think the idea of focusing your winter celebration on art and storytelling isn’t something to be scoffed at.

In the time of Trump, art feels even more essential, even more necessary. Leo Lionni, himself “half” Jewish, fled Fascist Italy for American in 1939 and knew a little something about the importance of art in dark times. Let us all remember the moral of Frederick and make the art and the traditions we need to sustain us through the long winter ahead.