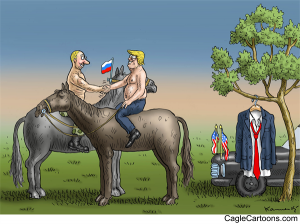 It was June 2001 and I was covering President George W. Bush’s trip to Slovenia, where he had just met Vladimir Putin for the first time. I and others were struck by Bush’s praise for the Russian leader as “trustworthy.” Said Bush: “I was able to get a sense of his soul.”
But back in Washington, my editor had no interest in such talk. He rewrote my lede with other news — a tidbit about missile defense — and he moved the “kissy-face” stuff about Putin’s soul down to Paragraph 18.

In retrospect, that moment in Slovenia defined the Russia relationship for years to come. Putin had seduced Bush, who only slowly came to understand he had misjudged this adversary’s soul. Putin opposed Bush in Iraq and was unhelpful with Iran. He shut down independent television, sent business leaders who criticized him into exile and prison, ousted democratic parties from government, canceled the election of governors and invaded Georgia.

The kissy-face happened all over again when President Obama and Secretary of State Hillary Clinton tried to “reset” relations. Russia responded by working against the United States in Syria, sheltering Edward Snowden, invading and occupying parts of Ukraine, and hacking and meddling in the U.S. election to defeat Clinton.

Now it’s Donald Trump’s turn for kissy-face, and the president-elect is practically groping the Russian dictator. After Putin gloated Friday that Democrats need to learn “to lose with dignity,” Trump tweeted Putin a sloppy kiss: “So true!” he said of Putin’s comments.

Trump also celebrated a letter he received from Putin calling for more collaboration between the two countries. “His thoughts are so correct,” Trump said.

Trump’s blush-inducing embrace of the strongman has included repeated praise of Putin’s leadership, deflected questions about Putin’s political killings and disparagement of U.S. intelligence for accusing Russia of election meddling.

In three weeks, Trump will assume the presidency, and we’ll learn what his embrace of Putin really means. Perhaps Trump is just a dupe and he’ll realize over time that Putin is no friend. The alternative, supported by Trump’s choice of Putin-friendly advisers Michael T. Flynn and Rex Tillerson, is that Trump really is pro-Putin and will grant the Russian dictator more latitude internationally and will emulate his autocratic tendencies at home.

The former would require us to endure some policy failures as Putin proved himself again to be an adversary. The latter would test the limits of our democratic institutions.

In either case, it would be useful for Americans to have at least a cursory sense of the man our new president proposes to embrace. Here’s a quick glimpse into Putin’s soul to get us started:

Opposition leader Boris Nemtsov was killed outside the Kremlin as he walked home one night last year. Putin’s regime blames Chechens, but Nemtsov’s is one of a dozen high-profile murders of opponents widely thought to have been sanctioned by Putin’s government.

Another Putin opponent, Alexander Litvinenko, was killed in London by polonium poisoning in 2006. The British government said Putin “probably” approved the hit. That same year, opposition journalist Anna Politkovskaya was shot and killed outside her apartment.

Among the many business leaders imprisoned or ousted under Putin are Mikhail Khodorkovsky, who was head of the oil giant Yukos, and associate Platon Lebedev. The Russian human rights group Memorial says there are 102 people held in Russian prisons for their political or religious beliefs.

The Kremlin has provided funding and training for far-right nationalist parties in Europe, and it used its state media and an army of hackers and social-media trolls to spread disinformation in the United States, in continental Europe and in Britain before the Brexit vote. The goals: to weaken European unity and the NATO alliance and to keep Europe dependent on Russian energy.

Russia also used disinformation to destabilize the Ukrainian government as Russia annexed Crimea. In Syria, where Russia propped up the Assad regime with indiscriminate bombing in Aleppo and elsewhere, Britain, France and the United States have blamed Putin’s government for the mass slaughter of civilians.

This, Mr. President-elect, is the man you are embracing. Please spare us the kissy-face.