Pushed out of the pulpit by his sexuality, HDS is bringing Ballon back 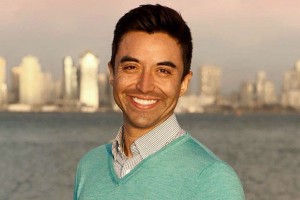 ince he arrived at Harvard Divinity School (HDS) two years ago as a master of theological studies (M.T.S.) degree candidate, it has been Danny Ballon’s mission to prove that gay and Christian are not antithetical. And while HDS has long been an LGBTQ-friendly community, Ballon is passionate about helping the School play a unique role in the LGBTQ life of Harvard University.

When asked how he found himself in divinity school after working as a corporate lawyer, Ballon emphasized that divinity school was not the detour in his life plan — law school was. And yet, his experience with civil rights policy has lent him a unique perspective on the role of each Harvard School in advancing LGBTQ rights and acceptance.

Ballon sees his intersecting passions for legal advocacy and ministry as jointly informing his work in LGBTQ initiatives at Harvard.

“Harvard Design School is … creating space for LGBT homeless youth. The Law School and HKS [Harvard Kennedy School] are doing a lot of policy advocacy work, and, in the background, a lot of the resistance to that work is religious — a lot of it is driven by religious prejudice,” Ballon said. “And so I think within that context, the Divinity School presents a very important counter-narrative to that.”

Ballon, the son of a Pentecostal pastor, says he was raised “very much literally in the church.” From a young age, Ballon says he felt called to ministry. “At 15, I was the choir director and the worship leader at my church. By 17, I was one of the youth leaders.”

After his first year of college, Ballon dropped out to pursue ministry full time. A childhood friend had started a church designed “to bring kids in who were either part of gangs or involved in the gang and drug culture of L.A., who were just dealing with all the effects of living in poverty,” Ballon said.

His work at the church ultimately led him back to college to pursue a degree in psychology, with a focus on minority health, and to the life-changing experiences of ordination and coming out that would leave him at a crossroads.

As Ballon finished his undergraduate degree at the University of Southern California, two key experiences changed his life. “I was ordained as a minister. And then, in my senior year, I fell in love with a guy.”

While he had always known he was attracted to men, falling in love changed his understanding of his sexuality.

“I started to question how something that feels this pure and beautiful could be wrong,” he explained.

Coming out as gay to his friends and family marked a turning point in Ballon’s life. He was pushed out of his ministry and rejected by most of his childhood friends. Suddenly, his plan to become a minister seemed to hang in the balance. He went to law school with the intention of applying his ministerial interests toward a more secular avenue — civil rights advocacy.

After several years working as a corporate lawyer for the ACLU, however, Ballon met someone else who would change his life: a gay seminarian.

“I thought, he’s a gay guy, who’s my age, who I met out at the bars. I had no idea he was Christian. I sat him down one day and asked him, ‘You can do that? Gay people can become ministers? There are schools that will let you do that?’”

As Ballon considered his next career move, he began to see divinity school as an opportunity to reunite parts of his identity that he had thought could not be mixed.

Ballon views his own experience of religious alienation and subsequent journey toward an LGBTQ-affirming spiritual life as one of many similar stories across the HDS community. Seeing a lack of official extracurricular resources for HDS students interested in integrating sexuality and spirituality, Ballon decided to create one that included the wider University.

“At the beginning of the semester, there were all these flyers on Harvard Yard that had the question, ‘Can you be religious and queer?’ The answer, to me, is ‘Of course you can!’ There are so many people here who have been able to reconcile being queer with being spiritual or having faith in something. I felt that it was important for us to create a space where we celebrate that — to create a space where we can, with relation to our role in the University, showcase that.”

For Ballon, who is reviving the HDS Queer Rites group with first-year M.Div. student Denson Staples, queer ministry is not about achieving a specific goal; rather, it is about encouraging individuals to explore what their spirituality means in light of their sexuality and to invest in projects that feel meaningful to them.

“I am trying to provide people a range of resources,” Ballon said. “Rather than telling people, ‘This is how you reconcile your sexual orientation with your faith identity,’ my goal is to show people, ‘These are all the ways that people are doing it. Trust that you are smart and capable and you will figure out what works for you.’”

In his work for Queer Rites, Ballon draws on his own experiences to determine what might best serve the community. “So much of the bad stuff that I went through for years after coming out could have been avoided if I had just known that I didn’t have to give up my faith,” Ballon said. “What are the options? You can be Christian and gay, or you could not be Christian and still be happy, and still be a good person. What I’m trying to do is introduce people to the range of options, then leave that work for them to do for themselves.”