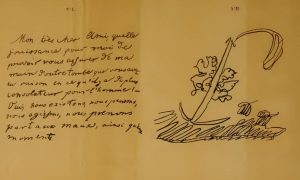 A page from one of Guldenstubbé’s manuscripts

When stories about the Fox sisters of New York state and the mysterious “rappings” that allowed them to communicate with spirits first came out in the late 1840s, it sparked a spiritualism craze around the world.  Never mind that the Fox women would eventually confess that the rappings were a hoax, scientists, clergymen, aristocrats, and housewives would all weigh in with their own spooky experiences and spirit mediums, seances, and ghostly messages would continue to be in vogue for decades to come.

And so it was in Paris when the first spiritualist circle was formed in 1850 under the leadership of Baron Ludwig de Guldenstubbe.   An Estonian by birth, de Guldenstubbe had a long fascination with the occult and animal magnetism and had already made a reputation for himself as a “ghost hunter.”  He wrote extensively about his ghostly findings including one previous experience on the Estonian island of Saare Maa where he reportedly witnessed coffins being thrown around a family vault by a mysterious force.  After holding the first meeting of his new spiritualist circle in his spacious Paris home, he quickly found mediums who could were reportedly every bit as talented as the Fox sisters themselves.   Not only did these seances produce the same mysterious rappings the sisters described but also featured table turning and other forms of “poltergeist” activity, all witnessed by many of Paris’s literary and social luminaries.

But de Guldenstubbe wasn’t satisfied with seances.  Not only did he want  final proof of life after death, but he also wanted to discover a way to communicate with spirits without the intervention of a medium.   Whether he suspected some mediums of outright fraud or whether he simply wanted the chance to make his own firsthand contact with the Other Side, he decided to try something different.  Drawing on Biblical accounts of supernatural writing (such as the mysterious apparition that wrote on the walls of King Belshazzar’s dining room), he designed a series of experiments to see if spirits could write messages.

In one 1856 experiment, he locked a pad of blank paper and a pencil into a sealed box to see if any ghostly messages would appear.  After numerous disappointments, he finally opened the box to discover some mysterious marks on the paper.   Other messages soon appeared, one of them in the Baron’s native Estonian.   According to his later account, he eventually saw the letters forming on the paper without the aid of the pencil at all.   The messages didn’t really say anything important, mind you but, in much the same way that Marshall McLuhan would eventually report, it was the medium that was the message.

While other spiritualists would copy de Guldenstubbe’s experiment and report their own success with spirit writing, it was the good Baron who did it first.   Enthused by his success. he publicly announced that “The hour is about to come when materialism and the skeptical rationalism of our so-called modern savants will be utterly routed.”   Again though, de Guldenstubbe wanted more. Since the messages were completely anonymous, there seemed no way of directing questions at specific figures from the past.

Until, that is, he hit on a rather intriguing method that will forever be associated with his name.  One of the advantages of living in Paris was the abundance of statues of famous people that could be found in churches, cemeteries, and museums throughout the city.   What if he left sheets of paper and visiting cards at the foot of these statues as a way of inviting the noble spirits to send messages?   And so, assisted by assorted friends and fellow spiritualists, de Guldenstubbe conducted a series of experiments at places such as the Hall of Antiquities in the Louvre, the Basilica of St. Denis, Pere Lachaise cemetery, etc where he left behind writing paper and returned after a fixed period of time.

Though not all of the statues cooperative, de Guldenstubbe was delighted to find messages at many of the statue sites, all of them written in the native language of the famous person in question.   At the statues of Queen Mary Stuart, for example, notes were written in English while Plato, Socrates, Cicero, Virgil, etc. wrote notes in either Greek or Latin.   Though the notes weren’t particularly revealing, de Guldenstubbe eventually compiled over five hundred of these messages, all of which he published in his book, Positive and Experimental Pneumatology: the Reality of Spirits and the Marvellous Phenomenon of Their Direct Handwriting which is available online.

Public reception to the book was, well, mixed.   Though de Guldenstubbe and his fellow academics were eminent enough that nobody was willing to accuse them of outright fraud, many critics concluded that they were the gullible victims of some unknown prankster.  While a few adventurous historians raised the possibility of using this kind of spirit writing to answer some of history’s most vexing questions, nothing really came of it.  In any event, de Guldenstubbe’s book was quickly forgotten and spiritualists moved on to more promising ways of communicating with the dead.

As for de Guldenstubbe himself, he gave up on his statues and returned to conducting seances.  By the late 1860s, he had relocated to London and had created a new spiritualist circle that regularly held seances in his home.   These seances were regularly attended by many of London’s most famous writers, aristocrats, and scientists, including biologist Alfred Russel Wallace.  It was Wallace who introduced his new discovery, medium Agnus Guppy (later Agnes Guppy-Volckman).   Though eventually exposed as a fraud, Agnes Nichol became one of London’s most famous physical mediums thanks to the spectacular effects she accomplished during de Guldenstubbe’s seances,, including objects that seemingly “appeared” out of nowhere.

By the time he died in 1873, de Guldenstubbe’s reputation as a spiritualist had already been overshadowed by more prominent names such as Wallace, William Crookes, and Madame Blavatsky.  If he is remembered at all, it is as the man who tried to talk to statues, an achievement nobody ever really allowed him to live down.  Even today, there is not way to tell whether he faked his results completely or was simply the victim of someone hoping to cash in on the spiritualist movement.

As for de Guldenstubbe himself, he (so far) seems disinclined to tell his side of the story.