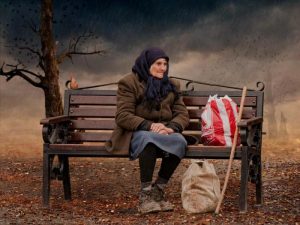 How often do we see things without actually taking in what is occurring in front of our eyes. Or, on seeing, prefer to look away or ignore, or pretend it isn’t happening.

We were standing at the check-out in the supermarket. We had just spent two hours at 2,300 m playing with cameras and flowers, and nature and the elevation had taken its toll… not to mention the inclination to forget to breathe at all the beauty. We were tired. The queue wasn’t long—two German women in front of us with a lot of stuff, and in front of them, an old wizened woman who had just had all her things put through the till.

Behind us was a man with one or two things. And we waited and waited and waited. The two women were talking to each other in German, discussing something that had happened that they weren’t going to “stand for.” Yes, I do understand quite a bit of the language (as do others understand many different languages) and it’s a good thing to consider this when travelling or living in foreign countries. You never know who understands what. Take care with your words.

The wait was becoming tedious, and I turned my attention to what the hold-up could be. The old woman’s groceries were all in bags, so what was the problem? Everyone else seemed oblivious and, while attitudes regarding waiting vary in different cultures, this “waiting” was decidedly odd.

The young teller was concentrating on the old woman, and so was the packer. The old woman? She had a multitude of scrunched-up dollar notes that she kept unfolding and flattening on the counter. Then she picked up the notes again, fiddled in her pockets, flattened the notes on the counter and counted. Nope, not the right amount. She picked them up again and fiddled for a purse around her neck. Emptying it, it still wasn’t enough. She picked up everything again.

The two women in front of us—did I mention one of them had a nice crisp $100 bill in her hand?—started muttering to each other impatiently. “Now what?” I wanted to slap them. They could see “what” if they looked.

I turned to my partner and said, “I am going to help her.” I went through the check-out row next to us and walked over to the teller and the old lady. I gestured to the teller asking “how much?” as I do not speak Spanish and no one else spoke English. The old woman looked at me alarmed, but I touched her arm and smiled and shook my head gently so she could see there was no threat. The teller told me, I handed her the money and she explained to the old woman what was happening. I took the change and walked back to my place in the queue.

Was I smiled at or thanked? No. Did that matter to me in the least? Again, no. But it felt good to help someone out of a difficult situation. I remembered another situation that made me smile. I have had many of these, but some stand out because they are almost surreal.

I had just arrived in Quebec City in January of 2012. It was obviously cold, and the ground was covered in snow and ice. Map in hand, I started out on a very careful walk to get my bearings. I was waiting at a red traffic light, when I felt someone take my arm. It was a tiny old lady, she didn’t even reach my shoulder (I seem to attract little old dears), smiling and chatting in French. She just held onto my arm, and when the light turned green, we walked together. I realized that she was holding onto me to prevent her from falling on the icy pavement. I expected her to let go once we crossed the road. She didn’t.

I had no idea where I was going, let alone where she wanted to go. I made some gestures and she smiled and said “oui, oui” and we continued on our way. I made note of landmarks along the way to ensure I could get back to my hotel.

All of a sudden, in the middle of a block, she let go my arm and made to cross the street. I gestured a questioning “Do you need help?’ “Non, non. Bingo.” I burst out laughing as she shuffled carefully across the busy street to go play her weekly Bingo game. And every time I thought of her during the day, I giggled.

And that is what random acts of kindness are all about. There is an immediate need that should be taken care of by anyone willing and able to do so. It means being aware, being mindful of what is going on around you. It means being adaptable, being willing to drop whatever you intended doing at a second’s notice. It means allowing the moment to take you wherever it will. And you do them… these little kindnesses. Not for glory, or thanks, or a smile. Sometimes you get those too, often not. You do them because they need doing, because someone has to, and why not you?

In a world gone completely insane, it’s the random acts of kindness that make sense. We cannot change the big world out there on our own, but we can change the little worlds of one-at-a-time. And that’s what makes the difference.