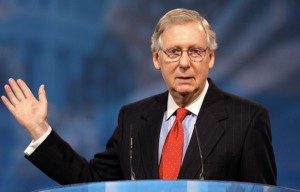 Compromat. Get used to this Russian word, for it contains the full meaning of last night’s bombshell report about Russian election hacking. We must learn to use it early and often, especially when discussing Senate Majority Leader Mitch McConnell.

Russia’s role in the hacking and publication of internal Democratic Party emails has been known and widely discussed since Wikileaks first published them. But reality show star-turned-president elect Donald Trump has been dismissive of the evidence – and so has McConnell, according to The Washington Post.

Per their reporting, when President Obama held a secret bipartisan briefing with Congress to present a CIA report concluding that high-level Russian officials were trying to elect Trump, McConnell immediately chose party over country.

The Democratic leaders in the room unanimously agreed on the need to take the threat seriously. Republicans, however, were divided, with at least two GOP lawmakers reluctant to accede to the White House requests.

According to several officials, McConnell raised doubts about the underlying intelligence and made clear to the administration that he would consider any effort by the White House to challenge the Russians publicly an act of partisan politics.

Some of the Republicans in the briefing also seemed opposed to the idea of going public with such explosive allegations in the final stages of an election, a move that they argued would only rattle public confidence and play into Moscow’s hands.

McConnell’s office did not respond to a request for comment. After the election, Trump chose McConnell’s wife, Elaine Chao, as his nominee for transportation secretary.

Mitch McConnell’s craven selling-out has apparently not saved him or the GOP from compromat. According to The New York Times, US intelligence agencies reached their consensus of Russian responsibility because high-level Republicans were also hacked, though their emails were never published.

This party line probably conceals the depth of the compromise. Russia conducts influence operations with a broader agenda than just favoring one candidate.

From the beginning, there was a theme to the reporting on this story. While the American intelligence community had formed a consensus weeks before the election that Russian hacking aimed “to favor one candidate over the other, to help Trump get elected,” as the Post reports, there were objections to the narrative.

First, there was denial. Trump is the biggest denier of all, issuing a terse and dismissive statement last night.

Backstopping the denialism, some have tried to compromise with the story in order to mitigate it. Their argument was that Putin might simply be trying to compromise American public faith in elections altogether – a distinction without a difference.

Compromat aims first to put Russian friends in charge of foreign states, but even failing this goal, ‘4th generation warfare’ has a broader purpose of undermining western democracies to promote strongmen friendly to Moscow.

If Hillary Clinton had still managed to win the election, Putin would try to cripple her presidency with further disclosures. The fact that his chosen candidate won doesn’t mean Putin will stop now.

On the contrary: the next phase of this influence operation is already underway and McConnell will be a key figure in the fulfillment of Putin’s ambitions.

For example, Russia has a strong interest in selling its oil and gas to the West and undermining renewable energy. As the man in charge of the Senate, McConnell will now facilitate the end of sanctions, foster the annihilation of climate change science and regulation, undermine wind and solar alternatives, and push to confirm a friend of Russia – Exxon-Mobil CEO Rex Tillerson – as Secretary of State.

Meanwhile, if necessary Vladimir Putin can release plum Republican emails through the usual outlets to quash any resistance within the GOP. He can also manipulate American domestic affairs through secret insider knowledge of Republican communications.

The president-elect is a soft target who likes to chat up world leaders on unsecured phones and rarely takes intelligence briefings. Mitch McConnell is a useful idiot who only does what is good for the power of his party. Together, they share a vision of America that just happens to match what is best for Putin’s Russia. No doubt it will be a profitable compromise.