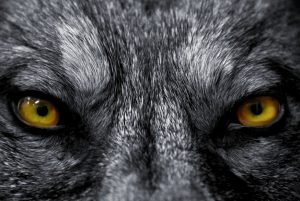 By Dr. Simon Horobin / 09.06.2016
Professor of English Language and Literature
University of Oxford

Unlikely as it sounds, the topic of adjective use has gone “viral”. The furore centres on the claim, taken from Mark Forsyth’s book The Elements of Eloquence, that adjectives appearing before a noun must appear in the following strict sequence: opinion, size, age, shape, colour, origin, material, purpose, Noun. Even the slightest attempt to disrupt this sequence, according to Forsyth, will result in the speaker sounding like a maniac. To illustrate this point, Forsyth offers the following example: “a lovely little old rectangular green French silver whittling knife”.

But is the “rule” worthy of an internet storm – or is it more of a ripple in a teacup? Well, certainly the example is a rather unlikely sentence, and not simply because whittling knives are not in much demand these days – ignoring the question of whether they can be both green and silver. This is because it is unusual to have a string of attributive adjectives (ones that appear before the noun they describe) like this.

More usually, speakers of English break up the sequence by placing some of the adjectives in predicative position – after the noun. Not all adjectives, however, can be placed in either position. I can refer to “that man who is asleep” but it would sound odd to refer to him as “that asleep man”; we can talk about the “Eastern counties” but not the “counties that are Eastern”. Indeed, our distribution of adjectives both before and after the noun reveals another constraint on adjective use in English – a preference for no more than three before a noun. An “old brown dog” sounds fine, a “little old brown dog” sounds acceptable, but a “mischievous little old brown dog” sounds plain wrong.

Nevertheless, however many adjectives we choose to employ, they do indeed tend to follow a predictable pattern. While native speakers intuitively follow this rule, most are unaware that they are doing so; we agree that the “red big dog” sounds wrong, but don’t know why. In order to test this intuition linguists have analysed large corpora of electronic data, to see how frequently pairs of adjectives like “big red” are preferred to “red big”. The results confirm our native intuition, although the figures are not as comprehensive as we might expect – the rule accounts for 78% of the data. 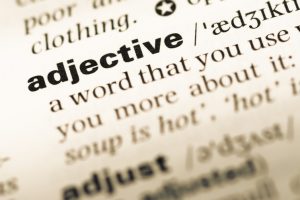 We know how to use them … without even being aware of it. / Shutterstock

But while linguists have been able to confirm that there are strong preferences in the ordering of pairs of adjectives, no such statistics have been produced for longer strings. Consequently, while Forsyth’s rule appears to make sense, it remains an untested, hypothetical, large, sweeping (sorry) claim.

In fact, even if we stick to just two adjectives it is possible to find examples that appear to break the rule. The “big bad wolf” of fairy tale, for instance, shows the size adjective preceding the opinion one; similarly, “big stupid” is more common than “stupid big”. Examples like these are instead witness to the “Polyanna Principle”, by which speakers prefer to present positive, or indifferent, values before negative ones.

Another consideration of Forsyth’s proposed ordering sequence is that it makes no reference to other constraints that influence adjective order, such as when we use two adjectives that fall into the same category. Little Richard’s song “Long Tall Sally” would have sounded strange if he had called it Tall Long Sally, but these are both adjectives of size.

Similarly, we might describe a meal as “nice and spicy” but never “spicy and nice” – reflecting a preference for the placement of general opinions before more specific ones. We also need to bear in mind the tendency for noun phrases to become lexicalised – forming words in their own right. Just as a blackbird is not any kind of bird that is black, a little black dress does not refer to any small black dress but one that is suitable for particular kinds of social engagement.

Since speakers view a “little black dress” as a single entity, its order is fixed; as a result, modifying adjectives must precede little – a “polyester little black dress”. This means that an adjective specifying its material appears before those referring to size and colour, once again contravening Forsyth’s rule.

Of course, the rule is a fair reflection of much general usage – although the reasons behind this complex set of constraints in adjective order remain disputed. Some linguists have suggested that it reflects the “nouniness” of an adjective; since colour adjectives are commonly used as nouns – “red is my favourite colour” – they appear close to that slot.

Another conditioning factor may be the degree to which an adjective reflects a subjective opinion rather than an objective description – therefore, subjective adjectives that are harder to quantify (boring, massive, middle-aged) tend to appear further away from the noun than more concrete ones (red, round, French).

Prosody, the rhythm and sound of poetry, is likely to play a role, too – as there is a tendency for speakers to place longer adjectives after shorter ones. But probably the most compelling theory links adjective position with semantic closeness to the noun being described; adjectives that are closely related to the noun in meaning, and are therefore likely to appear frequently in combination with it, are placed closest, while those that are less closely related appear further away.

In Forsyth’s example, it is the knife’s whittling capabilities that are most significant – distinguishing it from a carving, fruit or butter knife – while its loveliness is hardest to define (what are the standards for judging the loveliness of a whittling knife?) and thus most subjective. Whether any slight reorganisation of the other adjectives would really prompt your friends to view you as a knife-wielding maniac is harder to determine – but then, at least it’s just a whittling knife.