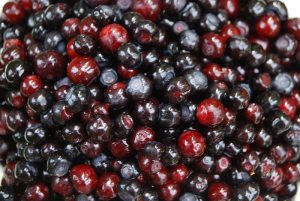 Forced assimilation destroyed most nations’ diets, but now Native youth are learning to integrate local foods back into their daily lives.

Researcher Abaki Beck, 23, has vivid childhood memories of helping her mother, grandmothers, and aunts pick traditional foods and medicines on the Blackfeet Nation in northwest Montana. Because her great-grandmother passed down her vast knowledge of the tribe’s traditions, Beck learned the importance of eating these foods at an early age.

Well before white settlers colonized their land, Blackfeet Nation members used more than 200 types of plants for food and remedies. But forced assimilation and reliance on the U.S. government for food adversely shifted most nations’ diets from whole foods to industrialized processed foods and eroded tribal health. More than 80 percent of American Indian and Alaska Native adults are overweight or obese, and half of American Indian children are predicted to develop Type 2 diabetes in their lifetimes, according to the Indian Health Clinical Reporting system.

Beck, who has a degree in American studies and has researched the impacts of settler-colonialism on Blackfeet youth suicide, hopes to change those health disparities. Her report, published in May, “Ahwahsiin: Traditional Ecological Knowledge and Contemporary Food Sovereignty on the Blackfeet Reservation” (ahwahsiin translates to “the land where we get our food”), features oral history interviews with nine Blackfeet elders who discussed the nation’s traditional foods and the health issues connected to a modern American diet. A 2016 survey —the Blackfeet Nation has approximately 17,000 members—found that one of the most cited barriers in accessing traditional or local foods was lack of knowledge. 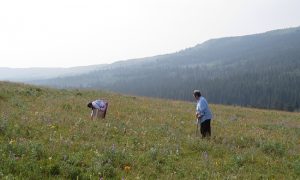 “Our people survived genocide in part because of [traditional] foods and medicines,” Beck says. “And because our elders are passing away and global warming is changing how our environment functions, now is a significant time to capture elders’ knowledge and our own community’s history.”

Beck partnered with Saokio Heritage, a community-based and volunteer-run organization on Blackfeet. The report was funded by a $10,000 grant from the First Nations Development Institute and is available on the organization’s website.

Many of the traditional foods, plants, and teas are still available on the reservation, and some are even sold in health food stores, Beck says, so younger tribal members can learn to integrate them into their daily lives. For example, traditional medicine like willow bark or blue root can replace Tylenol, and bison or venison can replace fatty beef. Local berries can either become a traditional berry soup or be mixed into other recipes like pancakes, muffins, and smoothies.

“Some Westernized foods and medicines are not best for tribal people,” says Carolyn Angus-Hornbuckle, director of public health policy and programs at the National Indian Health Board. “These health disparities are happening throughout Indian Country, and we could see positive health impacts if Blackfeet chose to share Beck’s report and their knowledge with other communities.”

Most scholarly research reports are concealed behind paywalls and easily accessible by only those in academia, but Beck removed that barrier for the Blackfeet people by making her report available for free. 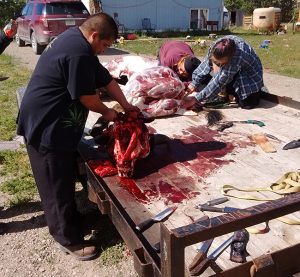 Danielle Antelope, a 21-year-old Blackfeet Community College student who helped Beck conduct the interviews, grew up eating chicken patties, cheeseburgers, and tater tots for dinner. “We never ate vegetables,” Antelope says. “My mom was a single mom, so she wanted to make sure we were full when she fed us, but we didn’t think about the nutritional aspect of what were we eating.”

“I wish I had known of our traditional ways of eating when I was younger,” she adds. “I didn’t really learn about eating healthy in school, either.”

Efforts to promote food sovereignty throughout Indian Country have included youth education, community gardening, and economic development. But because there are hundreds of distinct tribes—with different needs and systems of food, government, and regulation—approaches to tackling the health disparities vary greatly, Beck says.

Even though “health disparities on the Blackfeet Reservation [are] too broad to be solved by one report,” Beck says, she’s confident that awareness is part of the solution.