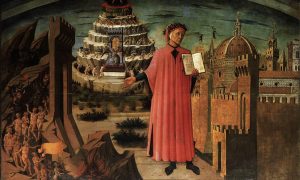 Dante and the Three Kingdoms by Domenico-di-Michelino / Wikimedia Commons

In a world like that of mediaeval Christian Europe, where everyone was a religious believer, how was the moral standing of non-Christians to be approached? Could people who did not share the faith everyone acknowledged as true nonetheless be virtuous?

Mediaeval Christians were educated in a culture derived from antiquity. They learned to admire the heroes of ancient Rome and Greece, and their great poets and philosophers. Lucretia, Regulus, Cato, Virgil and Aristotle, for example, seemed obviously to have been virtuous people. But Christian doctrine appeared to go against this conclusion: all people are affected by Original Sin, in such a way that they cannot act well consistently, and so be virtuous, without divine assistance. The route to this divine assistance was through faith – precisely what these pagans lacked. Moreover, if such pagans were genuinely virtuous, then it would be unjust for God to damn them, and yet there seemed to be biblical warrant that no one without faith is saved. This, in outline, is the problem that pagans posed to Mediaeval Christian thinkers.

Characteristically, Augustine (354-430) solved the problem in a clear but brutal way. Pagan virtue, he said, was only apparent, not real. In his City of God, he looks in detail at the supposedly heroic behaviour of pagans in order to show why it was not really virtuous at all. For example, he condemns Lucretia, who killed herself after she had been raped by the Tarquin, King of Rome, as being guilty of acting out of pride. But, despite the enormous esteem in which Augustine was held throughout the Middle Ages, most thinkers tried to find ways to avoid such a harsh judgment on the pagan past.

One way was to make a sharp distinction between pagans who lived before the coming of Christ and those who lived after it. It was accepted that the Jews who lived before Christ were God’s chosen people and that many of them would be saved. Although the Jewish prophets and leaders were considered to have known about the coming of Christ, the ordinary Jewish people had only a vague understanding of it, or perhaps merely a belief in whatever their leaders believed. From the 12th century onwards, some thinkers argued that wise and virtuous pagans had the same sort of knowledge, either through reasoning or because of prophecy; the fact that the Sibyls were believed to have prophesied Christ’s coming helped make this idea plausible.

Peter Abelard (1079-1142), for instance, was certain that many pagans were highly virtuous. He knew indirectly about Plato’s ideal republic, and he imagined that the ancient philosophers really had established such cities in which all the virtues, even the ascetic ones, were practised at a level of excellence to which the monks of his own day could only aspire. By claiming that the philosophers were Christians before the coming of Christ, Abelard could argue that, as justice required, God granted them salvation. Thomas Aquinas (1225-74) compared the ancient philosophers directly to the ordinary Jewish people of Old Testament times. Like them, they were not granted full knowledge about the coming of Christ but, because they were willing to accept the beliefs of whoever was in a position to know the truth, they could be saved by this ‘implicit faith’. Implicit faith did not provide a way of rescuing virtuous pagans who lived after the coming of Christ, but Abelard, Aquinas and many others argued that, should a pagan in those times really lead a completely virtuous life, God would reveal to him or her what was needed for salvation, either through a messenger or by miraculous, internal inspiration.

A different way of approaching the problem was to develop a theory of ‘political’ virtues: genuine virtues that pagans could possess, but which did not contribute towards salvation. Such a view makes the justice of God hard to fathom in human terms. It is not surprising that it appealed to thinkers in the early 14th century, such as Duns Scotus and William of Ockham, who saw God’s unfathomable will as founding ethical rightness, rather than the reverse. Ockham distinguishes different grades of virtue, at the summit of which is heroic virtue, wherein one goes beyond human nature and accepts terrible suffering for a good cause. Ockham insists that all the grades of virtue, even this highest one, are open to pagans as well as Christians: the pagan who is willing to be burned rather than do injustice is ‘perfectly heroic’, just like the Christian martyr – but he will still receive no heavenly reward for his heroism.

Of all mediaeval writers, the one most fascinated and disturbed by the problem of virtuous pagans was Dante (1265-1321), and it is he who takes the separation between pagan virtue and salvation to its limits. Dante’s guide through Hell and into Purgatory is Virgil, who has, we are told, all the natural virtues, but is excluded from salvation simply because he lacked faith. When not occupied with guiding Dante, he is placed in Limbo, at the edge of Hell, along with other virtuous pagans, among whom are the great heroes, poets and philosophers of the ancient world.

Limbo might seem, from Dante’s description, a pleasant abode, and the souls there, certainly, are not subject to the quasi-physical tortures of elsewhere in Hell. But they are, nonetheless, damned, and have to live ‘in desire without hope’ – a state that Boccaccio, a sensitive reader of Dante, describes as so terrible that it would drive a living person to suicide. Dante could, like Aquinas, have used the idea of implicit faith to save his virtuous pagans, but he chose not to do so. He also pointedly refused the view, in line with one endorsed by Aquinas, that God would somehow save the man born on the banks of the Indus, who has lived a virtuous life and has heard nothing about Christ and so cannot be blamed for his lack of belief. Dante is able to value the pagan world, its poetry and its philosophy only by placing the pagan virtue and wisdom in a sphere isolated from that of Christian belief and heavenly salvation.

Both Dante’s pained condemnation of the pagans he so much admires and the more accommodating attitudes of most other mediaeval thinkers might seem to result from a problem very different to any that face intellectuals today, in a mainly secular society, tolerant of many religions. But in fact the underlying general question is even more pressing today than 1,000 years ago. How do we understand and judge those whose lives are governed by beliefs and ideals different from our own?