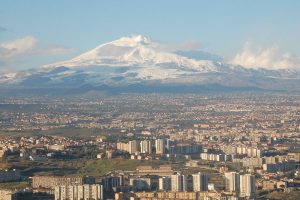 Mt Etna, with Catania in the foreground / Photo by BenAveling, Wikimedia Commons

Stories were used as an attempt to explain how and why certain phenomena in the world around us came to be.

Myths are one of humanity’s oldest methods of understanding and responding to the environment. Long before formal scientific methods or even written documentation, stories were used as an attempt to explain how and why certain phenomena in the world around us came to be. Many of these stories are still with us today, and among the most enduring and timeless of all of them are the stories of Greek mythology.

It will be interesting then, to observe how Greek mythology approaches the fiery activity of volcanoes- one of the most volatile, destructive and important to understand features of the world around us. In particular, we will look at two myths, both pertaining to the activity of Mt. Etna on Sicily. If we study these myths, we can come to know how ancient Greece responded to its environment, and gain insight into what it was to live in the shadow of an active volcano. 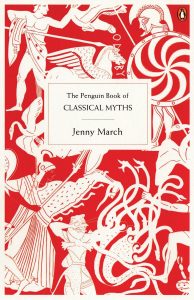 One such myth states that Mt. Etna is residence to the god of fire and metalwork, Hephaestus. Hephaestus was responsible for forging armour and weapons for Athena the goddess of war, as well as numerous beautiful and enchanted bracelets which were granted as gifts to both gods and humans. Jenny March writes in The Penguin Book of Classical Myths:

As god of fire, Hephaestus was thought to have not only a workshop on Olympus, but forges elsewhere in the world, wherever the earth gave forth emissions of smoke and fire, and especially beneath the volcanic Mt. Etna […] [T]he Cyclopes worked under his direction, and the mountain resounded with the noise of their hammering, and quaked and smoked from the ceaseless fiery activity.

Ancient Greeks who looked up at the summit of Mt. Etna were no doubt reminded of the hot orange interiors of their own furnaces, and the incredible temperatures required to smelt metal. On Mt. Etna, they observed these same conditions on a much larger scale; the noise of their hammering magnified one-thousand fold. What else could the interior of Mt. Etna be, then, other than the gargantuan forge of some fiery blacksmith? 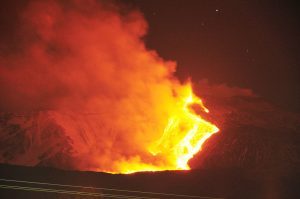 The ancient Greeks also had another myth, which described Mt. Etna’s more violent activity. Long ago, the Greek gods were under threat from a large and particularly terrifying cousin of theirs, Typhon (from whom we get the word “typhoon”, for he controlled the storm winds). Typhon was finally thwarted when the entire island of Sicily was hurled on top of him by Zeus, and was buried for all eternity. In this story, Typhon’s rage, his struggle to break free and his fiery breath are the cause of the lava flows, the black cloud above Etna and the trembling and quaking of the earth.

These are two very different explanations for the volcanic activity of Mt. Etna, but they reveal to us several interesting things. Each myth reveals to us a different attitude taken towards the volcano: respect (that it is the source of enchanting and beneficial artefacts); and fear (that it is the source of a fire-breathing monster). By looking at myths, we can not only learn how ancient cultures understood the world around them, but also how they responded to it. Ancient Greece feared Mt. Etna and recognised its potential danger; but they also saw it as a source of blessings and enchantments. Once we understand this, we can begin to know what it might mean for a civilisation to live under a volcano. We can gain insight into what it is to have lived nearby something so unfamiliar, and come to know nature in an entirely different light.

For more information on Greek and Roman myths regarding not only Mt. Etna, but any subject, I would recommend: Jenny March’s The Penguin Book of Classical Myths (published 2008, Penguin Books, London), which proved a valuable source for most of the information here.

Originally published by the University of East Anglia and reprinted for educational, non-commercial purposes.