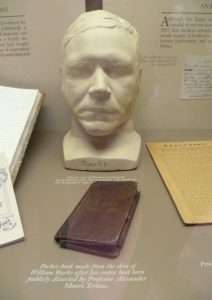 Megan Rosenbloom at Lapham’s Quarterly delves into anthropodermic bibliopegy, the strange history of books bound in human skin, like this pocket book created in 1829 from murderer William Burke of the Burke and Hare murders.

Scratching the surface of the history of any real human-skin book usually reveals a doctor was the one wielding the knife. At a time when physicians were climbing social classes and enjoying the trappings of their new wealth and status—including becoming collectors of fine art and books—at least a few chose to preserve the hides of deceased indigent patients to bind copies of their own work or of those that they admired, like anatomist Andreas Vesalius. (Brown University’s Hay Library holds a large, beautiful anthropodermic Vesalius, in addition to three other books proved to be bound in human skin.) At the same time, public executions were one of the only legal sources for obtaining bodies for dissection. Doctors sometimes removed the skins of infamous murderers and used them to bind books about their deeds—a fact well known enough to serve as a kind of deterrent. The most infamous case is the pocket-sized book bound in the skin of William Burke, half of the Scottish duo Burke and Hare, who murdered sixteen people in order to sell their bodies to doctors for dissection. Like his unfortunate victims, Burke could not escape the anatomist’s knife in the end, and his skin book resides in Surgeons’ Hall Museum in Edinburgh. While doctors today refuse to participate in executions, citing the principle of “first do no harm,” doctors in the eighteenth and nineteenth centuries worked with their governments to ensure their access to dead bodies for anatomical learning.