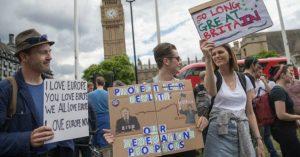 Brexit opponents disagreed with the Leave’s argument that the June vote reflected the true will of the people. (Photo: Getty)

High court ruled government does not have unilateral power to withdraw the U.K. from the E.U. by triggering Article 50

The U.K.’s High Court on Thursday ruled that only British Parliament can decide to leave the European Union, slowing Prime Minister Theresa May’s unilateral Brexit plans in what one leading lawyer called “a resounding defense” of democracy.

The ruling (pdf), written by chief justice Lord Thomas of Cwmgiedd, sided with a crowd-funded coalition of anti-Brexit plaintiffs and stated that the government does not have unilateral power to withdraw the United Kingdom from the E.U. by triggering Article 50, which sets out how a country may voluntarily leave the union.

“The most fundamental rule of the U.K.’s constitution is that Parliament is sovereign and can make and unmake any law it chooses,” the ruling states. “This principle is of critical importance and sets the context for the general rule on which the government seeks to rely.”

Pro-Brexit lawyers had argued that prerogative powers would be a legitimate way to take up “the will of the people” who voted to leave the E.U. in a June referendum. But the High Court disagreed.

“The government does not have power under the crown’s prerogative to give notice pursuant to Article 50 for the U.K. to withdraw from the European Union,” Lord Thomas wrote.

A government spokesperson responded to the ruling, which came as a surprise for many, by promising that ministers would appeal the decision to the Supreme Court. That hearing is set to take place on December 7-8.

As the Guardian explains, “Unless overturned on appeal at the supreme court, the ruling threatens to plunge the government’s plans for Brexit into disarray as the process will have to be subject to full Parliamentary control.”

Dominic Cummings, director of the Leave campaign, wrote on Twitter that the high court’s ruling was reasonable at heart and noted that Parliamentary sovereignty means the government cannot and should not try to change domestic laws by use of the prerogative.

Brexit opponents celebrated the ruling. Scottish First Minister Nicola Sturgeon called on the government to shelve its appeal and disagreed with the Leave’s argument that the Brexit vote reflected the true will of the people, stating, “That the U.K. government is now in the position where the court has ruled against it and is insisting that Parliament must vote before Article 50 can be triggered underlines the chaos and confusion at the heart of the Tories’ handling of Brexit.”

“Let’s be clear—the prime minister has not tried to avoid Parliament because of constitutional principles but because any vote in Parliament would expose the complete lack of a plan for what Brexit means.”

Labour MP David Lammy wrote on Twitter that the ruling was “A huge victory for our parliamentary democracy. This is what real sovereignty looks like.”

And Labour Party leader Jeremy Corbyn responded, “This ruling underlines the need for the Government to bring its negotiating terms to parliament without delay. Labour respects the decision of the British people to leave the European Union. But there must be transparency and accountability to parliament on the terms of Brexit.”