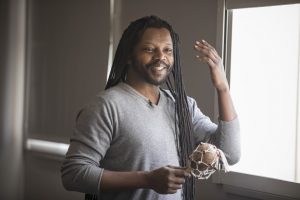 Harvard instructor introduces seventh-graders to the world of Gullah

It’s unlikely that many of his grade-school classmates would have predicted that Sunn m’Cheaux would grow up to be a Harvard instructor.

“I remember being humiliated in elementary school, because I sounded different from the other kids. I was a Gullah-speaking kid in an English-speaking class. I was a fish out of water,” the artist, activist, and social commentator told a roomful of Cambridge seventh-graders recently.

“That memory has always stuck with me. Like that song [‘Let’s Call the Whole Thing Off”], ‘You say tomato’? Well, I said ‘demayda,’ not ‘tomahto,’ but I was corrected, disrespected, while the latter was accepted. Which is why I now teach Gullah at Harvard University, to see that Gullah is accepted and Gullah/Geechee people respected.”

M’Cheaux, an instructor in the African Language Program at Harvard, worked with students at Vassal Lane Upper School in Cambridge, teaching them the origin of his native tongue.

“The Gullah language is a creole, the result of essentially taking multiple existing languages and mashing them all up into one,” he said. “Mix in some other elements indigenous to the Sea Islands and surrounding areas, and you have a whole new language. That in a nutshell is Gullah.”

Gullah, or Geechee, was created by enslaved people brought from West Africa to Charleston, S.C., who needed a common language to communicate. It allowed them to speak freely, by way of encoded speech, in the presence of those holding them in bondage. That code-speak evolved into a language of its own, indigenous to the Gullah Geechee Cultural Heritage Corridor, which extends along the coast of the southeastern U.S.

M’Cheaux was working with the students through Harvard’s Project Teach program, which helps local seventh-graders see themselves as college-bound, showing them that college can be an affordable, accessible, and attainable opportunity. (Research out of the Harvard Graduate School of Education has shown that middle school is when students begin to envision themselves going — or not going — to college.) The program works to expose students to examples of some typical and some atypical courses, and acknowledges that college can be different things to different people.

For m’Cheaux, this has been a lifelong journey. Born into a rural, impoverished family in Charleston, m’Cheaux didn’t learn to speak English until he was bused to another town midway through elementary school. Although he became fluent in his second language, he says he never strayed far from his Geechee roots.

M’Cheaux is the first and so far only instructor of Gullah at Harvard. He says he’s honored and humbled to be here, but knows he carries the responsibility of sharing the language and history of his people to a broader audience. His lessons build upon the groundbreaking work that Harvard graduate Lorenzo Dow Turner, M.A. 1917, started decades ago.

“We really want to encourage a student’s innate curiosity,” said Joan Matsalia, associate director of Public School Partnerships at Harvard. “We want to show them that the subjects many people end up studying in college aren’t necessarily the things they imagined they’d study. College has something for everyone. Sunn, and his course on Gullah, is a perfect example of how important it is to follow your area of interest. Get excited about what you’re curious about, and the rest will come.”

According to m’Cheaux, “Gullah is an oratory language passed down by people who were not academics. The language came into existence from people who did not go to school. They were literally banned from going to school — and threatened with death if they were educated. But ultimately what ended up happening to get Gullah recognized was that an academic [Turner] did the research and broke it down to show its connections to African languages.”

What Turner discovered about Gullah was that it wasn’t just broken English, nor a sign of unintelligence. “There is something quite intelligent happening here. Something complex happening here,” m’Cheaux said in summarizing Turner’s research.

The origin may indeed be complex, but evidence of the language is far more prevalent than many realize. Students were surprised to learn that many common words or phrases are actually rooted in the Gullah language: yam (sweet potato), Bubba (brother), gumbo (okra). Georgia, home of the Sapelo Island Geechees, is nicknamed the Goober State for its mass production of peanuts — and guba (goober) is the Gullah/Geechee word for peanut. 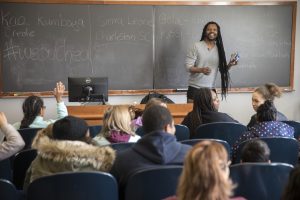 Probably the most recognizable Gullah word is kumbaya. The song of the same name has spiritual origins, as it is a Gullah prayer. “Kumbaya” — or “come by here, my Lord, come by here” — was originally a “shout song” or “work holler” used as a meditation, a way for workers to mentally cope with the task at hand.

“I thought it was really interesting that the language that we speak every day has so much Gullah influence in it,” said seventh-grader Eman Abdurezak. “I think it’s important that people are teaching about it because people need to be aware of and help preserve it. I really enjoyed singing ‘Kumbaya’ together, and learning about what it actually meant. I never knew.”

“Ancestors who created the language were trying to not only communicate with words and ideas, but also trying to figure out how to preserve their sense of self,” said m’Cheaux. “That’s how Gullah came into existence.

“Some among us feel like if we decode our language, teach Gullah to those who do not live it, it will be diluted or die,” he said. “Indeed, the entrance of outsiders has seldom been in our best interest. Still, I believe we Gullah/Geechee people are at a juncture where sharing our language, culture, and contributions with others is integral to keeping those things alive.” 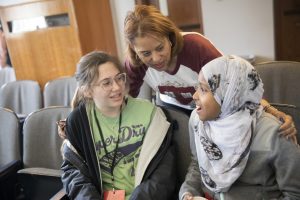 M’Cheaux said he was thrilled to be able to share his love of the language and its origins with the students, who learned and practiced saying Gullah phrases, and sang along to traditional Gullah songs.

“I really want to encourage you all to be excellent in at least one thing. It doesn’t really matter what that thing is,” m’Cheaux said. “Learn how to balance a spoon on your nose … you’ll start thinking about how it’s on staying on your nose. Gravity? Weight distribution? Now suddenly you’re curious about physics.

“You may not know that’s what it is at the time — but you will,” he said. “So, pick a thing and that thing will be a seed that grows. Your excellence is not something that needs to be defined by someone else. Be great at anything and that will open the door to everything.”