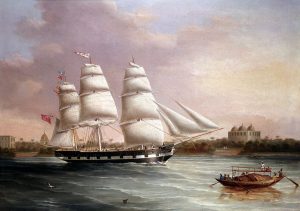 Whether drawing for official purposes or for pleasure, soldier-artists contributed a rich source to the visual imagery of colonial India in the 18th and 19th centuries.

Britain’s earliest foothold in India came with trading stations, or factories, set up by the East India Company in the early 17th century with the permissions of local rulers, initially at Surat near Bombay. Royal troops arrived in Bombay in 1665, and, after Charles II received the city from the Portuguese as part of the dowry of Catherine of Braganza in 1668, the garrison was handed over to the East India Company. The formation of the first regiment of Company troops, the Bombay European Regiment, followed.

In the south a factory was founded at Madras with headquarters at Fort St George, and lastly the Bengal establishment was founded with headquarters at Fort William in Kolkata. During the following period of British expansion in India, both Royal and Company troops were engaged in a number of campaigns, most notably the Mysore and Maratha Wars, and by 1824 there were 27 cavalry and 174 infantry regiments in the armies of the three presidencies of Bengal, Madras and Bombay, in addition to King’s Troops. 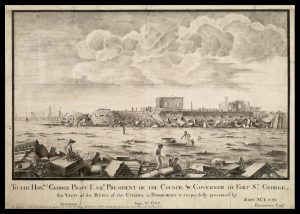 John McClean pictures Pondicherry in ruins a year after the Siege of 1760–61 / British Library, Creative Commons

The first British regiments were sent out for particular emergencies, but in 1787 four new regiments were raised specifically to serve in India, the 74th and 75th Highlanders and the 76th and 77th Foot. The pattern of the army in India was thus established with British regiments serving alongside the Company’s regiments. The three Company armies were retained after the Mutiny in 1857 and subsequent transfer of the government of India to the Crown, and were only amalgamated to form the Indian Army in the 1890s.

The Royal regiments were considered first in precedence in India, a succession of regiments serving for spells of duty for anything up to 20 years. Many newly-arrived soldiers had little hope of seeing their families again, as so many succumbed to disease and injuries. When the 72nd Highlanders landed at Madras in 1781, they were reduced from 500 to 50 effective men in the space of three weeks. Officers who survived, however, were able to take lengthy furloughs after a period of duty, and at the end of their tour were sometimes given the opportunity of transferring to the Company’s service as soldiers or civilians. Between 1796 and 1820 only 201 officers of the Company’s armies retired to Europe on pension, while in the same period 1243 died or were killed on active service.

Between campaigns, skirmishes and infrequent furlough, however, day to day life for the military could be tedious. The monotony was relieved for the officers by a busy social round of balls, theatricals, riding and shooting, but in camp or on the march everyone was thrown on their own devices. Much advice was given to young officers on ways of passing their ample leisure time. In Hints to Cadets, published in 1842, Thomas Postans, then a lieutenant in the Bombay Army, wrote ‘…music, drawing and resources of all and every kind are valuable and to be appreciated as the great barriers to the mischief which always results from the absence of such means of passing time in India.’[1] Emma Roberts in The East India Voyager had rather a stern warning for the young officer: ‘…military men have frequently a considerable quantity of spare time upon their hands, and should they accustom themselves to bestow it wholly upon the billiard room, they will suffer proportionately when that resource fails them, as it often must, since there are numerous stations in the country unprovided with such a refuge for the destitute. It is therefore of infinate [sic] importance to the youth who has obtained a cadetship, that he should cultivate and encourage some useful pursuit… Those who have a taste for drawing will find it an inexhaustible source of amusement, and should lose no opportunity whatever in obtaining proficiency in sketching from nature.’[2] 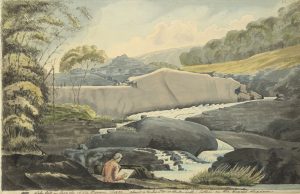 Music and drawing were of course an accepted part of middle and upper class education from the mid-18th century. The British travelling out to India had usually received some instruction enabling them to record their impressions of its landscape and people, and details of their own lives and work. These amateur artists often reached standards not far short of the professional, and even where technical expertise was lacking, the drawings can give a fascinating insight into the tastes and interests of the individual artist.

An ability to draw was especially important for the military, particularly engineers and surveyors. Maps, precise topographical studies showing forts and military establishments, and plans of individual buildings were all required, and the infantry and cavalry often used diagrams and maps to accompany reports.

The British Army had employed drawing masters from the late 18th century at the Royal Military Academy in Woolwich, the Engineering College at Chatham and the Military College, High Wycombe. The Company’s cadets were expected to reach the same standards of education, and after an unsatisfactory attempt to share the facilities at the British Army training establishments, the East India Company founded its own college at Addiscombe in 1809 for the training of artillery and engineer cadets. In 1816 infantry and cavalry cadets were admitted, and between 1809 and its closure in 1861, about 3500 cadets spent two years at the college. 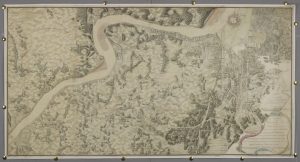 This is one of three surveys by Mark Wood, a Captain in the East India Company’s Bengal Army. A minutely-detailed survey drawn at a scale of 4 inches to a mile, the map shows the city of Kolkata (then known as Calcutta) in West Bengal and the land surrounding the River Hooghly. / British Library, Creative Commons

At first drawing lessons were given for military purposes, but civil drawing was introduced shortly afterwards. The Addiscombe records include a reference to ‘Boxes of Colours (Two) to be provided for the use of Cadets; – One of Moist for Civil Drawing; and One of Cake Colours, 8 in number, with brushes and English ink for plans and sections at 2s/6d Per box.’[3] Prizes of silver boxes of colours were presented to outstanding students each year.

The importance placed on drawing as a useful accomplishment for the soldier is shown in a letter written in 1809 by Lieutenant-Colonel Tredway Clarke (1764–1858), Madras Army, concerning his son Tredway’s talent for drawing, ‘…in case the Boy shows a natural genius and inclination for drawing, I am desirous it should be encouraged by his beginning under a proper Master – as the qualification may hereafter be of great use to him in the army.’[4]

It is interesting to note that soldiers continued to draw and paint after the advent of photography, sometimes with less skill than was shown earlier in the 19th century, but often with a liveliness that captures a moment of drama or a striking view.

A further point of interest is that, alongside the work of officers, there are drawings by a few private soldiers made at a time when most could neither read nor write. It is fascinating to conjecture how their talents were recognised and encouraged. In Advice to Officers in India, John McCosh wrote:

If officers, with all the resources of a refined education, and all the indulgences of easy circumstances, so often fall victims to ennui, what must be the situation of the private soldier whose life during half the year is little better than solitary confinement; whose duty is little more than a plausible pretext to keep him out of idleness; whose idle hours are wearisome and monotonous to an excessive degree owing to a general incapacity for intellectual pursuit.[5] 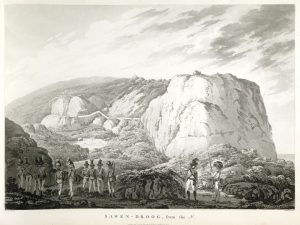 Alexander Allan’s view of Savandurga shows British infantrymen pointing towards the fortress of Tipu Sultan which was captured by the British in 1791. / British Library, Public Domain

As with most amateur artists it is impossible in many cases to establish a correlation between their profession and their works of art. Together with the work of other amateurs, official and civilian, and the professional artists who recorded the Indian scene during the period of British rule, drawings by soldiers contribute a rich source of visual imagery.