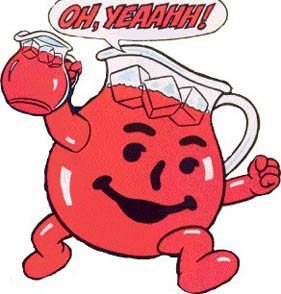 There is the good Kool Aid, and the not-so-good Kool Aid. When I was a kid I loved (and still do) Kool Aid, and sold it with my neighborhood elementary school friends on a street corner in New Haven to raise money for the Fresh Air Fund to help send kids from low income families to summer camp. Even in adulthood, I love some flavors.

Then there’s the not-so-good Kool Aid which was a sacrilege to this brand that for decades had meant innocence and quick flavor. That came to the forefront when huckster/man cult leader Jim Jones, founder and leader of the Peoples Temple, masterminded the infamous mass murder-suicide in November 1978 of 918 of his cult’s members in Jonestown, Guyana. The news included the fact that visiting Congressman Leo Ryan was murdered, four more Temple member deaths were ordered — and three-hundred children were murdered at Jonestown, almost all of them by cyanide poisoning. Wikipedia notes that added a new phrase to the American conversation:

“Drinking the Kool-Aid” is a figure of speech commonly used in North America that refers to a person or group holding an unquestioned belief, argument, or philosophy without critical examination. It could also refer to knowingly going along with a doomed or dangerous idea because of peer pressure. The phrase oftentimes carries a negative connotation when applied to an individual or group. It can also be used ironically or humorously to refer to accepting an idea or changing a preference due to popularity, peer pressure, or persuasion.

The phrase derives from the November 1978 Jonestown deaths, in which over 900 members of the Peoples Temple, who were followers of Jim Jones, died, many of whom committed suicide by drinking a mixture of a powdered soft drink flavoring agent laced with cyanide (with the remainder, including 89 infants and elderly, killed by forced ingestion of the poison).

New numbers The Washington Post characterize as “brutal” now indicate many Americans — including many Republicans — are not drinking the political Kool Aid billion are showman/reality TV star/racist Donald Trump is serving.

In so many ways, Trump’s political Kool Aid is a sacrilege of America’s political process and norms with a just-short-of overt appeal to stir up and enable bigotry, racism, and bringing up nutcase, extremist conspiracy theories. And the question remains among some: is this really how he feels or is he doing a shtick that gotten out of control?

However, even if was the latter, it would underscore a character flaw that should make all thoughtful Americans of any or no party to ensure that Donald Trump is defeated by whopping numbers come November. The Post now presents numbers that show that not only are many Americans not willing to to drink the toxic mix of hatred, paranoia, crudeness, and lack of preparation in policy that Trump (and those in the conservative media who are promoting him) is peddling — but his campaign is in tatters on other fronts. The Post:

Supporters of Donald Trump got an unexpected plea on Saturday: a request to send the billionaire money.

It was an “emergency” request, the Hill reported, representing an urgent need for an infusion of $100,000 to put ads on the air in battleground states. Why Trump couldn’t simply write a check to cover the costs apparently wasn’t explained, but the missive was useful regardless: It demonstrates clearly the difficult position of the Trump campaign with only 142 days to go.

We looked at Trump’s sliding poll numbers on Friday, but it’s worth adding a bit more context.

And the context is brutal:

Not only are Trump’s poll numbers slipping, they are at a low that no one, Republican or Democrat, has seen in the past three election cycles. Looking at the window of time between 200 and 100 days before each of those elections, you can see that Trump has consistently polled worse than George W. Bush in 2004, John McCain in 2008 and Mitt Romney in 2012. He caught up briefly after clinching the GOP nomination — and then sank again.

This shows why you’re seeing some push-back on the part of some Republicans who oppose Trump due to ideology, his lack of preparedness, appeals to racism, and more: they fear the Republican Party and the conservative revolution that started with Barry Goldwater’s defeat is becoming The Trumpublican Party, which cannot be confused with the Party of Lincoln or the Party of Reagan (all of Reagan’s children have said their father would never have voted for Trump and the late Nancy Reagan is said to have hated what Trump has come to stand for and how he behaves). The Post offers this graph: 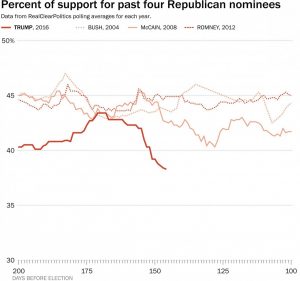 The Post also finds that Trump’s numbers mirror those of Arizona Sen. John McCain when he trailed now-President Barack Obama in 2008. 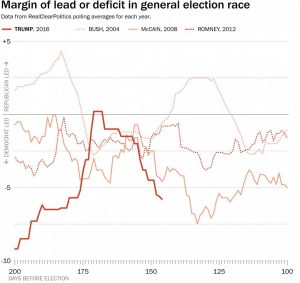 But it gets worse: Trump’s campaign machine may not be “low energy,” but it is hideously understaffed:

There’s every reason to think that those numbers will get worse. Trump essentially has no campaign at this point; there’s no sign that he has started staffing up significantly. We looked this month at how his staffing compared with the two final Democratic candidates. His campaign was never a traditional, national effort.

Swing state ad funding? The Trump campaign is shockingly behind Hillary Clinton and what Mitt Romney spent against Obama. In fact, the campaign has spent virtually nothing:

In their look at the 2012 election, our John Sides and UCLA’s Lynn Vavreck found that ads made a difference in the race when the balance was lopsided, as it is now. They also found that the presence of staff on the ground made a slight difference in the margin for a candidate in that region. (Without his field operation, they estimate, Obama probably would have lost Florida.) It’s very early; Sides and Vavreck also found that ads right before the election made the biggest difference.

You wonder if this has truly sunk into the media. Trump is counting on getting the free media from the news media, which has not gone out of its way during the primaries to ensure other candidates got event close to the same amount. Is the media going to ensure that Hillary Clinton and strong third party candidates get as much to or as close as the amount of free media Trump gets? (Don’t hold your breath waiting for that to happen).

In essence, Trump is running a real-time experiment in a new form of presidential campaigning. And the early numbers suggest that the experiment is shaping up to be a failure.

Trump has repeated his assertion that if top GOPers don’t work to get him elected, he can do it alone, not the best way of wooing party bigwigs for support. But he’s not wooing, or wowing them. Just seemingly chasing them away. The RNC’s Hispanic spokeswoman will not say whether she’s having trouble getting Hispanics to support Trump, which any journalist knows means she is. And House Speaker Paul Ryan said it’s up to convention delegates to decide whether to support Trump or not — in effect, a green light to them not supporting Trump if they can find a way to dump him that is legal and won’t decimate the party more than Trump will.

The lingering question — which Trump foes and friends think they have answered but no one except Trump knows — is whether this is the “real” Trump we’re seeing or shtick.

Talk show host Larry King, on several occasions in recent months, says the Trump on the stump isn’t the Trump he knows. And, indeed, you can sense that when Trump started his campaign many reporters and talk show hosts treated him like an old best bud because he was: he had been on many shows for years, and was highly accessible, as this colorful, blunt speakinng, sound byte generating rich guy who was covered by the tabloids. King said at one point that the Trump he knew for many years had been, in effect, an East Coast Republican — akin to the style of the initial incarnation of New Jersey Gov. Chris Christie or even the original version of Romney. In short? A moderate Republican.

As King put in in one interview, Trump got in and was surprised how this wave of support poured out, carrying himself to higher poll and primary electoral victories. Trump, King suggested, is just riding this wave that has lifted him up.

King’s contention now gains some credence with Maureen Dowd’s New York Times column. Here are a few parts of it:

Having seen Donald Trump as a braggadocious but benign celebrity in New York for decades, I did not regard him as the apotheosis of evil. He seemed more like a toon, a cocky huckster swanning around Gotham with a statuesque woman on his arm and skyscrapers stamped with his brand. I certainly never would have predicted that the Trump name would be uttered in the same breath as Hitler, Mussolini and scary menace, even on such pop culture staples as “The Bachelorette.”

Trump jumped into the race with an eruption of bigotry, ranting about Mexican rapists and a Muslim ban. But privately, he assured people that these were merely opening bids in the negotiation; that he was really the same pragmatic New Yorker he had always been; that he would be a flexible, wheeling-and-dealing president, not a crazy nihilist like Ted Cruz or a mean racist like George Wallace. He yearned to be compared to Ronald Reagan, a former TV star who overcame a reputation for bellicosity and racial dog whistles to become the most beloved Republican president of modern times.

Trump was applying his business cunning, Twitter snarkiness and bendy relationship with the truth to his new role as a Republican pol. The opposition was unappetizing: Cruz, a creepy, calculating ideologue; Marco Rubio, a hungry lightweight jettisoning his old positions and mentor; Chris Christie, a vindictive bully; Jeb Bush, a past-his-sell-by-date scion.

When Trump pulled back the curtain on how Washington Republicans had been stringing their voters along for years with bold promises, like repealing Obamacare, that they knew had no chance, it was a rare opportunity to see them called out. And when Trump was blunt about how cheaply you could buy and sell politicians in both parties, it made this town squirm.

Trump shocked himself by shooting to the top of the Republican heap. It was like watching a bank robber sneak into a bank, only to find all the doors unlocked. But like Dan Quayle and Sarah Palin, Trump refused to study up on policy. So he has been unable to marry his often canny political instincts with some actual knowledge.

He has made some fair points. A lot of our allies do take advantage of us. Our trade deals have left swaths of America devastated. And it was a positive move to propose a meeting with the N.R.A. on gun control for people on the terrorist watch list. But his fair points are getting outnumbered by egregious statements and nutty insinuations, like suggesting that President Obama is tolerant of ISIS attacks, an echo of the kooky birther campaign that he led, suggesting that Obama wasn’t qualified to be president.

Now Trump’s own behavior is casting serious doubt on whether he’s qualified to be president.

If he wanted to rebrand himself, he most assuredly has.

But could this be it? Could Donald Trump have sold himself to prospects by saying what he knew they wanted to hear, in a way far more clear than his competitors who’d worry about traditional political norms, the impact and consequences of their language to themselves and on others?

Could it be that he is riding the wave and doesn’t know how tone down the tsunami that could level the Republican Party on election day?

If what we see is not in his heart and not what he wants, it’s too late. It’s unlikely he’ll be able to re-rebrand by election day.

They’ll have to redo an old nursery rhyme: