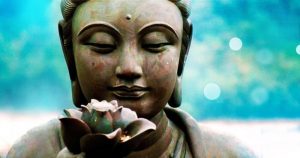 Understanding What Forgiveness Really Is

I cannot forgive you because I have no grudge against you.

Most people get easily offended or insulted by people who behave in an rude manner, not realizing that each and every person has a story, and unaware of the healing power kindness. But not all people do so, and here’s wonderful story from the life of the Buddha, carrying a beautiful lesson on forgiveness:

A Lesson on Forgiveness

“The Buddha was sitting under a tree talking to his disciples when a man came and spat in his face. He wiped it off, and he asked the man, “What next? What do you want to say next?” The man was a little puzzled because he himself never expected that when you spit in someone’s face he should ask “What next?” He had no such experience in his past. He had insulted people and they had become angry and they had reacted. Or if they were cowards and weaklings, they had smiled, trying to bribe him. But the Buddha was like neither, he was not angry, nor in any way offended, nor in any way cowardly. But just matter-of-factly he said, “What next?” There was no reaction on his part. 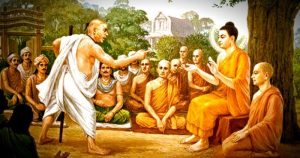 But Buddha’s disciples became angry, and they reacted. His closest disciple, Ananda, said, “This is too much. We cannot tolerate it. He has to be punished for it, otherwise everybody will start doing things like this!”

Buddha said, “You keep silent. He has not offended me, but you are offending me. He is new, a stranger. He must have heard from people something about me, that this man is an atheist, a dangerous man who is throwing people off their track, a revolutionary, a corrupter. And he may have formed some idea, a notion of me. He has not spit on me, he has spit on his notion. He has spit on his idea of me because he does not know me at all, so how can he spit on me?

“If you think on it deeply,” Buddha said, “he has spit on his own mind. I am not part of it, and I can see that this poor man must have something else to say because this is a way of saying something. Spitting is a way of saying something. There are moments when you feel that language is impotent: in deep love, in intense anger, in hate, in prayer. There are intense moments when language is impotent. Then you have to do something. When you are angry, intensely angry, you hit the person, you spit on him, you are saying something. I can understand him. He must have something more to say, that’s why I’m asking, “What next?” 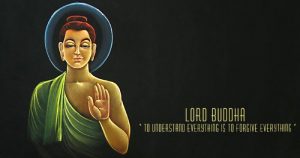 Learning to forgive everything

The man was even more puzzled! And Buddha said to his disciples, “I am more offended by you because you know me, and you have lived for years with me, and still you react.”

Puzzled, confused, the man returned home. He could not sleep the whole night. When you see a Buddha, it is difficult, impossible to sleep anymore the way you used to sleep before. Again and again he was haunted by the experience. He could not explain it to himself, what had happened. He was trembling all over, sweating and soaking the sheets. He had never come across such a man; the Buddha had shattered his whole mind and his whole pattern, his whole past. 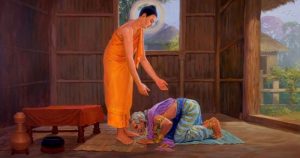 Every Man is a River

The man looked at Buddha and said, “Forgive me for what I did yesterday.”

Buddha said, “Forgive? But I am not the same man to whom you did it. The Ganges goes on flowing, it is never the same Ganges again. Every man is a river. The man you spit upon is no longer here. I look just like him, but I am not the same, much has happened in these twenty-four hours! The river has flowed so much. So I cannot forgive you because I have no grudge against you.

“And you also are new. I can see you are not the same man who came yesterday because that man was angry and he spit, whereas you are bowing at my feet, touching my feet. How can you be the same man? You are not the same man, so let us forget about it. Those two people, the man who spit and the man on whom he spit, both are no more. Come closer. Let us talk of something else.” 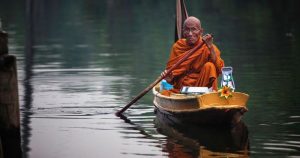 Whether this story describes an actual event or not is unknown. However, the lesson it teaches is tremendously beautiful and important. In essence, the story reminds as that nobody is perfect, and everyone is continuously changing and progressing in the journey of spiritual growth. Therefore, we should not be quick to judge others and take things personally, but realize where they are coming from and handle them with a compassionate attitude, no matter if they have treated us badly in the past.