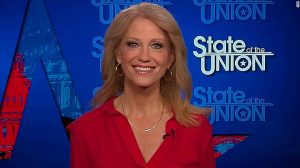 On any particular day you can find Trump’s campaign manager Kellyanne Conway on CNN denying reality. The system is rigged and her candidate didn’t really threaten to contest the legitimacy of American democracy and the polls are all lying.

And don’t even think about mentioning Donald Trump’s sexual assault allegations. That’s not fair. You know, the thing he bragged about on tape. Also off the table are his threats to jail his opponent and sue a dozen women for coming forward about his sexual misconduct.

And she spins all of this with a straight face. She recasts Trump’s whiny conspiracy theories as very “serious” questions. Or at least she does now.

This was not always the case. On CNN’s State of the Union, Jake Tapper played a clip of Conway herself calling Trump’s conspiracy theories “whiny” back when she worked for Ted Cruz.

She, of course, claimed that the clip was taken out of context, but Tapper continued to press her. She had absolutely no answer.

Better start working on the resume Kellyanne, and you’re probably going to leave “Trump campaign flack” off of it.