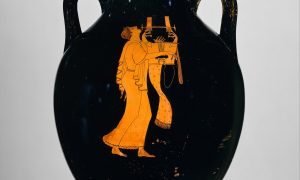 Despite a wealth of ancient writings, archaeological remains of instruments, and even inscriptions with musical notation, the question has long been thought intractable. 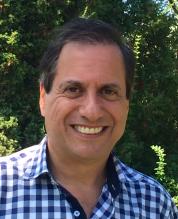 They told me, Heraclitus, they told me you were dead;
They brought me bitter news to hear and bitter tears to shed;
I wept as I remembered how often you and I
Had tired the sun with talking, and sent him down the sky.
And now that thou art lying, my dear old Carian guest,
A handful of grey ashes, long, long ago at rest,
Still are thy pleasant voices, thy nightingales, awake;
For Death, he taketh all away, but them he cannot take.

This epigram by Callimachus, in a moving translation by the Victorian poet William Johnson Cory, speaks of the timeless survival of Heraclitus’ songs. Ironically, the poem is the only evidence of their existence: the poet’s ‘pleasant voices’ must remain unsung. Most classical poetry, spanning around four centuries from the songs of Homer in the 8th century BCE to those ­of Aristophanes in the 4th century BCE, was in fact composed to be sung to the accompaniment of musical instruments such as the lyre and aulos (double-pipe). It was, in other words, music; but what did that music sound like?

Despite a wealth of ancient writings, archaeological remains of instruments, and even inscriptions with musical notation, the question has long been thought intractable. ‘Research into Ancient Greek music is pointless,’ pronounced Giuseppe Verdi in the 1880s. By the 1980s little had changed. Recently, however, the subject has experienced exciting developments, with credible realisations of musical scores and the remains of auloi being accurately reconstructed and beautifully played.

That Ancient Greek poetry was song is clear enough in the case of the lyric poetry of the 6th and 5th centuries BCE – the love poems of Sappho, the odes of Pindar, and so on. ‘Lyric’ alludes to the lyre that accompanied performances; the texts of the poetry are the ‘lyrics’ of lost songs. Such songs featured in a wide range of activities from ceremonies to celebrations. The choruses of Greek drama in the 5th century BCE also sang and danced, but tragedies must now be studied solely as stage plays rather than musical theatre – because the music is lost.

But is it entirely lost? One fundamental component of music is rhythm, and from ancient times Greek rhythms have been described and studied in terms of ‘metre’. Greek words had long and short syllables, the former twice the duration of the latter; one might represent them using half-notes and quarter-notes. While terms like ‘dactylic hexameter’ (a dactyl is ♩♪ ♪ or ♩♩) sound complicated, the six-measure phrase it represents can easily be understood:

What about melody and harmony? The philosophers Plato and Aristotle give us long discussions of harmonic systems (‘modes’) and technically oriented authors give precise descriptions of scales and pitches. Few people realise that the Greeks also devised (around 400 BCE) two notations, one for instrumental music and one for vocal. Tabulated by Alypius around the 5th century CE, they have been known since antiquity. The vocal notation used the Greek alphabet from A (alpha) to Ω (omega) to represent pitches from high to low. Analysis of surviving songs and instruments allows scholars to determine the range within which notes were pitched.

When fragments of Greek musical notation on papyrus were first found in the 16th century, therefore, Florentine scholar-musicians such as Girolamo Mei and Vincenzo Galilei knew how to interpret them. But the scant evidence gave them little grasp of the sounds of Ancient Greek music, and they proceeded to create their own versions: opera and oratorio. Since then a few dozen precious scores have been found: about 60 fragments survive on papyrus and stone. The most substantial, inscribed on stone tablets at Delphi, represent hymns by Athenaeus and Limenius dedicated to the god Apollo, dated 127 BCE.

The music of these documents follows not just the rhythm of Greek words, but their melody. Ancient Greek was a pitch-inflected language: the voice went up in pitch on particular syllables, as marked (from the 3rd century BCE) by accent signs. The Greek for ‘song’, for instance, was mélos, with the voice rising on the first syllable; while in kalós, ‘beautiful’, the second syllable was pitched higher – ‘within the compass of a fifth’ according to an ancient author. It makes sense that composers should respect the natural melodic shape of words, and the musical documents confirm that assumption.

Theoretical treatises indicate that the earliest Greek music (700-400 BCE) featured ‘enharmonic’ intervals smaller than a semitone, a practice that gave way around 400 BCE to the wholesale use of whole-tone and semitone intervals. In 1886 the philologist Rudolph Westphal declared that ‘the Greeks’ non-diatonic music that admits intervals smaller than a semitone, which are wholly foreign to the modern art, will probably, alas, remain for ever an enigma to scholarship’. Accordingly, historians long dismissed the notion that Western European music had its roots in Ancient Greece. Instead, the consensus was that it derived from the Gregorian plainsong of the 9th century CE, which in turn allegedly arose from the music of Hebrew liturgy. More than a thousand years of Greco-Roman music seemed to have left little trace on posterity – in retrospect an unlikely notion, but one barely questioned.

A papyrus fragment published in 1892, with music from Euripides’ tragedy Orestes (408 BCE), posed a vexing challenge because of its use of quarter-tones. New analyses of the fragment from 2012-16, however, led to striking breakthroughs. First, it was recognised that the music uses a falling melody to indicate dejection, and an interval leap to accompany the notion of ‘leaping’. This mimetic use of melody is not universal – it is not found, for instance, in Far Eastern music – but is a marked feature of the European musical tradition. Secondly, it was recognised that if the microtonal intervals were understood as ‘passing-notes’, the harmonic structure of the piece was no less tonal (as the ancient sources implied) than the 2nd-century BCE hymns of Athenaeus or Limenius, which employ only whole-tone or semitone intervals. Thirdly, an ancient commentator had noted that at the climax of the verse the chorus shouted rather than sang the words ‘terrible toils!’ – a striking effect known today as Sprechstimme.

With these considerations in mind, the Orestes papyrus was reconstructed and performed at the Ashmolean Museum in Oxford in July 2017. In 408 BCE, it would have been sung as part of Euripides’ tragedy by a 15-man choir accompanied by aulos, and its realisation makes for a piece of thrilling and impressive music. A film of the performance (together with other ancient music) has attracted huge popular interest, with almost 100,000 views online.

Scholars are finally in a position to propose that Ancient Greek music is likely, after all, to be at the root of Western music. Inherited by the Romans, this kind of music would have been sung throughout the cities of the Empire in the early centuries of the Christian era, as shown by surviving pieces attributed to Hadrian’s freedman, Mesomedes (2nd century CE). It would also have provided the harmonic and melodic idiom for the earliest Christian hymns sung in churches and congregations. A papyrus of a Christian hymn from around 300 CE is the latest document of ancient music that survives with ancient notation. It can hardly be doubted that elements of this tradition endured to influence Gregorian plainsong, as well as other manifestations of musical performance that underlie the development of Western music into the Renaissance and since. Callimachus’ words might now be recited with a new emphasis: ‘Still are thy pleasant voices, thy nightingales, awake; / For Death, he taketh all away, but them he cannot take.’