What was life in the fens like in the period known as the dark ages?  Archaeologist Susan Oosthuizen revisits the history of an iconic wetland in the light of fresh evidence and paints a compelling portrait of communities in tune with their changeable environment. In doing so, she makes an important contribution to a wider understanding of early medieval landscapes.

The East Anglian fens with their flat expanses and wide skies, a tract of some of the UK’s richest farmland, are invariably described as bleak – or worse. Turn the clock back 1,000 years to a time when the silt and peat wetlands were largely undrained, and it’s easy to imagine a place that defied rather than welcomed human occupation.

Historians have long argued that during the ‘dark’ ages (the period between the withdrawal of Roman administration in around 400 AD and the Norman Conquest in 1066) most settlements in the region were deserted, and the fens became an anarchic, sparsely inhabited, watery wilderness.

A new interdisciplinary study of the region by a leading landscape archaeologist not only rewrites its early history across those six centuries but also, for the first time anywhere in Europe, offers a detailed view of the settlement and agricultural management of early medieval wetland landscapes.

Susan Oosthuizen’s The Anglo-Saxon Fenland (published last month by Windgather Press) is a prequel to the geographer Clifford Darby’s definitive study of the medieval fen, published in 1940. She draws on her interest in the relationship between early communities and their landscapes – in particular their management of herds of cattle across extensive areas of shared grazing.

Oosthuizen suggests that, rather than undergoing dramatic change after 400 AD, communities continued to live around the fen edge and on ‘islands’ of higher ground rising above the peat wetlands just as their ancestors had. Her evidence lies in the recent boost in archaeological discovery.

A five-fold increase in excavations since new planning guidance was issued in 1990, and the introduction of the Portable Antiquities Scheme in 1997 for recording finds by the public, have transformed the volume of archaeological material across Britain – including the windswept fens.

As a result the ‘dark ages’, as the period was often described, with its connotations of backwardness, is now more commonly called ‘early medieval’ which suggests less of a disjuncture between eras that appear instead to have unfolded seamlessly.

In The Anglo-Saxon Fenland, Oosthuizen argues that this new evidence shows there is little to support the idea that the fenland was anything but continuously occupied by settled, stable communities during the period 400 to 900 AD.

Who were ‘the Anglo-Saxons’ and what do we know about the fens between 400 and 900? In her prologue Oosthuizen addresses these key questions with admirable clarity. Her answers set the stage for an exploration of a fertile wetland exploited for millennia by local communities and threaded through by a network of rivers that allowed incomers from across the North Sea to penetrate as far as the English midlands.

Since the early 19th century, it has been assumed that during the 5th and 6th centuries indigenous British communities were removed altogether or reduced to servitude by incomers arriving from north-west Europe – the Anglo-Saxons – who lived in separate settlements.

There is now, however, a growing realisation among archaeologists that it is impossible to identify ‘Romano-British’ and ‘Anglo-Saxon’ communities on the basis of material culture, the things that people used every day. “Settlements, fields and artifacts can be distinguished by status,” argues Oosthuizen, “but not by the cultural background of the people to whom they belonged.”

She writes: “The evidence from fenland shows that newcomers were assimilated into late British communities; there was no displacement of populations nor establishment of separate communities.” The distribution, for example, of Old English, vernacular Latin and (to a lesser extent) British Celtic place-names across southern England suggests that most early medieval people were bi- or even tri-lingual. Fenland was no different.

As Oosthuizen points out, being able to speak several languages confers obvious advantages, widening opportunities for all manner of transactions. It’s highly probable that the inhabitants of Walsoken and Chatteris, to name just two fenland villages, would have spoken both Old English and another language, switching from one to the other according to interlocutor and topic.

Basing her arguments on pollen analysis, archaeological evidence, the longevity over almost 1,500 years of rights of common pasture in the fen, and the etymology of place names, (and the absence of evidence to the contrary), Oosthuizen proposes that new arrivals were assimilated within the indigenous Romano-British communities, sharing livelihoods within the same landscape, their various languages and cultures mingling and merging.

The Anglo-Saxon Fenland paints a portrait of communities whose agricultural economies were based on common rights in shared wetland resources that belonged to the whole of the small territories among which they were divided. Arrangements by which the landscape’s bounty was apportioned took account of the needs of both local communities and the land itself, breathing life into the adage that the old ways are often the best ways, based on the wisdom that comes with practical experience and knowledge passed down from one’s elders.

Dairy cattle, for example, were allowed first access to spring pasture; as providers of milk their needs for optimum nutrition were greatest. On the other hand, cattle were barred from land at times when their hooves would damage the soil structure vital to its long-term health.

Oosthuizen writes: “Timetabling [grazing by the dairy herd] was focused on sub-dividing the fens to allow for their rotation for different uses in different months, whose objectives were to maintain the quality of the grazing, to sustain the health of the herd, to ensure equitable exploitation among right holders, to maximise production, and to assure the long term sustainability of fen pastures.”

A similar checklist of priorities, Oosthuizen points out, underpins modern conservation advice on floodplain water meadows, which are best maintained on a regime that includes annual mowing, use of livestock from August to keep the grass short, maintenance of boundaries, clearing of watercourses, and control of invasive weeds.

There is abundant evidence – in place names, ditches and banks, land- and water-management practices, and (once they began) records of agreements based on centuries-old tried-and-tested farming methods – that people managed the landscape not just to meet their immediate needs but to assure the long-term sustainability of the wetland resources on which their livelihoods depended. 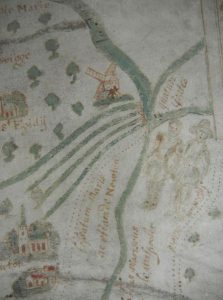 Detail of a late 16th century copy of an earlier map, possibly medieval in origin. It shows the area around Four Gotes in Tydd St Giles, near Wisbech. (Courtesy of Wisbech & Fenland Museum)

Fen dwellers made incremental adjustments to the ways in which they collectively exploited and safeguarded the fenland’s natural resources, adapting to water levels that slowly rose as a result of climate change.

In the undrained fen, water was both friend and foe. Serious flooding was a destructive force. Yet periodic (but relatively brief) seasonal inundation of pasture land produces grass not just for grazing but also to make the nutritious hay on which cattle thrived during the winters. Perhaps as early as 650, fen communities were already digging ditches to redirect excess water away from their pastures.

In 1618, the commoners at Cottenham described how the right amount of flooding, at the right time, could produce the white fodder which the cattle like best and that “those grounds that lie lowest, and are oftenest and longest overflown in the winter season are the most fertile grounds and yield the best yearly value”.

Detailed knowledge of the varying characteristics that depended on the degree of wetness in each part of the fenland enabled fen-dwellers to maximise its productivity through seasons wet and dry, and makes the most of opportunities for hunting, trapping and fishing – wildfowl and eels for the pot.

With The Anglo-Saxon Fenland Oosthuizen reveals a society whose origins could be found in prehistoric Britain, which had evolved through the four centuries of Roman administrations, and continued to develop thereafter. The rich and complex history of the fen region shows, she argues, a traditional social order evolving, adapting and innovating in response to changing times.

In piecing together evidence from a wide range of sources, she illuminates how early medieval communities interacted with each other, with newcomers, and – especially – how those relationships were intertwined with their management of the pastoral landscapes on which their livelihoods depended.

The Anglo-Saxon Fenland by Susan Oosthuizen is published by Windgather Press.