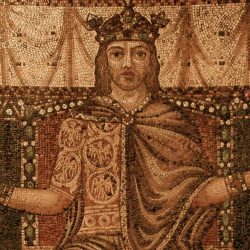 Infighting between Louis the Pious’s sons and external threats from different civilizations contributed to the collapse. Introduction The Germanic tribe known as the Franks established and ruled the Frankish Empire from the fifth through the tenth century in the ancient territory of Gaul(encompassing portions of modern-day France, Belgium, Switzerland, Germany, and the Netherlands). The Carolingian[…] 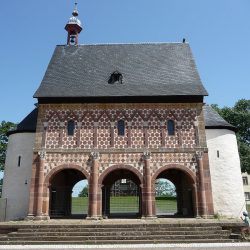 Torhalle Lorsch / Photo by Immanuel Giel, Wikimedia Commons Edited by Matthew A. McIntosh / 04.29.2018 Historian Brewminate Editor-in-Chief 1 – The Early Middle Ages 1.1 – Introduction The Early Middle Ages began with the fall of the Roman Empire and ended in the early 11th century; its art encompasses vast and divergent forms of media.[…] 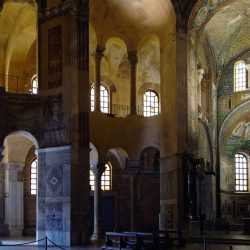 Map with present-day nations By Dr. Jennifer Awes-Freeman / 08.08.2015 Visiting Assistant Professor of Art History and Religious Studies University of St. Thomas Carolingian art and the classical revival The Palatine Chapel at Aachen is the most well-known and best-preserved Carolingianbuilding. It is also an excellent example of the classical revival style that characterized the architecture of Charlemagne’s reign. The[…]