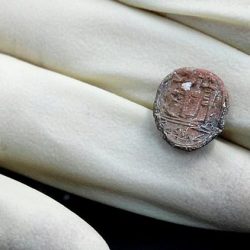 A conservator shows a 2,700-year-old clay seal impression which archaeologists from the Israel Antiquities Authority say belonged to a biblical governor of Jerusalem and was unearthed in excavations in the Western Wall plaza in Jerusalem’s Old City January 1, 2018. REUTERS/Nir Elias Reuters / 01.01.2018 The artifact, inscribed in an ancient Hebrew script as “belonging[…]