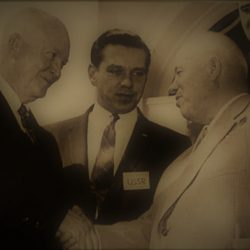 Two distinct and contradictory images dominate our understanding of Eisenhower, McCarthy, and the communist question. On March 4, 1954, the editorial cartoonist Herbert Block took on one of the most controversial issues of the time in his daily offering in the Washington Post. He featured two of the dramatis personae of the day: President Dwight[…]