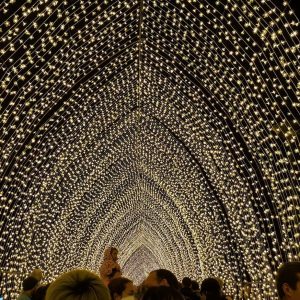 The Cathedral of Light at Sydney’s Vivid Festival. Doug Ford/flickr

By Dr. Naomi Stead / 06.10.2016
Associate Professor of Architecture
The University of Queensland

It’s interesting to see how often the cathedral emerges as a metaphor in everyday culture, and in which varied ways. Cathedrals are some of the largest buildings constructed by humankind, and some of the grandest and most beautiful.

They are also amongst the longest in the making – often the result of hundreds of years of labour, by workers who knew they would never see the finished thing; they epitomise human dedication to an ideal greater than the individual.

In the pre-modern world, their spires and domes were the landmarks of cities and towns, and in the middle ages their stories in stained glass conveyed biblical narratives to a largely illiterate population.

As well as being an (architectural) place of worship, a cathedral is also an object of worship – the container is also the contained. Thus, in this case, the architectural building, what it holds, and what it represents, are particularly interchangeable, and lend themselves to rich and varied metaphor.

There is a good built example in Sydney right now: the Cathedral of Light must be one of the most spectacular works in this year’s Vivid Festival. This is a long, tunnel-like installation made of thousands of tiny lights, where visitors process through (largely taking pictures to post to social media, it seems) until they reach the culmination: a beautifully framed view of the Opera House.

In this case, the cathedral allusion comes less from any religious connotation and more from the installation’s shape, a pointed arch extruded into a long, nave-like hall. The pointed arch is, of course, characteristic of Gothic cathedrals – those amazingly high and light constructions of stone and stained glass, where the walls could be made almost impossibly thin because of the structural bracing of flying buttresses.

The French Gothic cathedral (think Notre Dame de Paris) represents one of the pinnacles both of architecture and religious expression. But cathedrals from other locations or historic periods are equally astonishing – think of Antoni Gaudi’s Church of the Sagrada Familia, still being completed in Barcelona, or of Saint Basil’s Cathedral in Moscow. 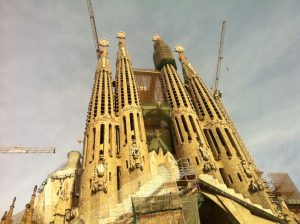 The name Cathedral of Light actually has a history, although not a very pleasant one. An earlier installation of the same title was created by the Nazi architect Albert Speer for the 1933 Nuremberg Rallies.

Surrounding the vast Nuremberg field with anti-aircraft searchlights pointed directly upward, Speer created a dramatic stage setting – the beams of light acting as vertical columns, defining a gigantic auditorium for the notoriously theatrical night rallies of the Nazi party. Here the association with a cathedral comes from the spectacle of fervent, quasi-religious political conviction, but also from the sheer size of the space defined – a contemporary observer described the installation as “both solemn and beautiful… like being in a cathedral of ice”.

But the most obvious way the cathedral works as metaphor is through its association with religious practices. The cathedral stands for God, of course, but more than that it stands for human faith. The link between religious experience and architecture is an ancient one.

Spaces of worship have long been imbued with a sacred character, living in and through the physicality of the building. The very fact that a space can be consecrated, thus dedicated to the divine and separated from profane use, shows that people have long believed buildings can somehow hold the sacred in their material. In the dedication of the physical to the metaphysical, the material to the immaterial, cathedral architecture comes as close as any construction to manifesting a sense of the divine – whatever that might mean. 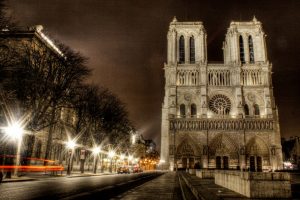 Given the potency of these associations, it’s not surprising that novelists have also made use of the cathedral as metaphor. The most celebrated example in Australian literature is of course the glass cathedral on a barge floating up a river, which is a central motif in Peter Carey’s Oscar and Lucinda.

As many have observed, one of the major themes in this book is religion as a form of wager – gambling on the unseen, on the nature of the afterlife and what eternity might actually mean. The idea to transport the glass cathedral to an outback town is itself the result of a bet between the two main characters:

“You could transport an entire cathedral and assemble it across the mountains,” [Oscar said]. “Can you imagine a glass cathedral?” She could. She saw its steeples, domes, its flying buttresses, motes of dust, shafts of light.

Mr Hopkins, we are mad to think of it.

Here, the glass cathedral stands for folly as much as aspiration, fanaticism as much as glorification. And the materiality of the construction, the delicacy and fragility of glass held up with a filigree of cast iron, is itself an expression of the improbability – near impossibility – of transporting such a building over such a long distance, and rough terrain, and then of erecting it successfully in the bush.

The glass cathedral seems as much about capturing and refracting light, as it is about defining a space, or fulfilling a practical purpose. Of course (spoiler alert) Oscar does succeed in his quest, but things don’t go well from there – the glass cathedral becomes a place of disaster and death.

Carey also points out throughout the narrative that the coming of the cathedral, symbol of the colonists’ exotic religion, displaces the much more ancient religious practices of the Aboriginal people for whom the land itself is the space of worship; there is no need for a specifically consecrated sacred space when the land and all the creatures in it are suffused with divinity. The glass cathedral in this case is thus doubly a tomb.

But all of this brings me to the reason I’ve been thinking about cathedrals and architecture and metaphor in the first place – another Australian literary moment, but a much less well known one. It’s a very minor note, in fact just a single line, in Helen Garner’s 1992 book Cosmo Cosmolino. The metaphor is so lovely though, and so rich, and also frankly so architectural, that it has come back to me often over the decade-or-so since I read the book, and at the most unexpected times.

From what I can remember (and the vagueness of this memory is authentic, dear reader, and seems important – having remembered one thing so sharply when all else has become blurred) it’s close to the end of the story, and one of the characters is having a religious experience, or psychotic episode, or both.

Events in the story have become increasingly portentous. At the crescendo of the narrative, there is a point of apotheosis: this character begins to move towards the divine, to be glorified, to literally rise upward from the earth in transfiguration. It is here that the metaphor appears. Her foot, stepping off the earth presumably for the last time, is described as “a tiny cathedral of bone and muscle”. See what I mean? What a beautiful idea.

I was reminded of all this again by Tegan Bennett Daylight’s recent thoughtful discussion of Cosmo Cosmolino as a novel in the Sydney Review of Books. Reading Daylight’s discussion, I remember now partly why I was so struck by Garner’s book in the first place – because it is suffused with faith.

Being an unbeliever myself, I am always amazed and awed, perhaps made rather envious, by other people’s genuine metaphysical belief. I remember the book having that kind of ecstatic mysticism which can be moving even if you don’t share the conviction.

Also I was surprised that Garner would actually veer into magic realism – for a writer so distinctly grounded in minute observations of the concrete everyday, it seemed like a profound departure. And it was the cathedral metaphor which seemed to capture all of these potent ideas.

The human foot does indeed bear a physical similarity with a cathedral: the arched form, the many articulated elements assembled together, the intensely fine spareness of the structure.

But most of all the metaphor captures the sense of tension – of a structure barely held aloft, each element stretched to its limit. In the foot, this lends a literal springiness, a flexibility and give between the bones, tendons and ligaments. In a building, it lends a sense of verticality, but also of expansiveness – of an opening out which is spiritual as well as spatial. Both senses of the word ‘vault’ are in play. There is an empathetic congruence between bodies and buildings.

The construction of bones in Cosmo Cosmolino is a tiny, personal cathedral, a literally internal one, carried within the body. A living, flexing system, this cathedral allows its carrier to spring upward, to rise towards grace.