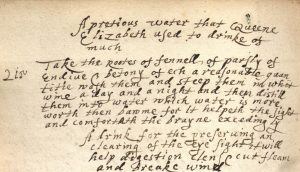 A late medieval manuscript in the Wellcome Library contains intriguing marks of censorship. MS. 406 is a collection of Middle English texts and recipes produced in the 15th and early 16th centuries. The recipes are from the ‘Practica phisicalia’ composed by John of Burgundy (c. 1338–90). John of Burgundy was best known for his plague treatises, such as ‘De epidemia’, in which he identifies himself as ‘John with the beard’, practitioner of the art of medicine from Liège.

As is typical of recipe collections of the period, John of Burgundy’s recipes cover treatments for the entire body, arranged from head to foot. Two of these recipes in particular are noteworthy, as they have been censored. These recipes concern a very delicate subject, as both describe the ingredients and provide instructions for producing ointments to apply to the penis. The first, on folio 35 verso, is entitled: ‘For swellyng of a mannys veretrum’. The second, on folio 36 recto, is entitled: ‘For scalding of a mannys veretrum’. However, in each title the Latin word ‘veretrum’ has been added by a different scribe. This Latin replaces the Middle English term for penis, ‘pyntell’, which has been thoroughly crossed out in each case. 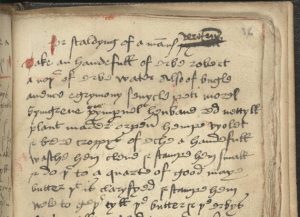 Glosses and corrections are not out of the ordinary for this manuscript, as they appear throughout for various reasons. A prime example can be found in the tetrameter poem ‘Ars phlebotomandi’, a work concerning bloodletting. On folio 3 recto, a scribe indicates that in one couplet, the author has made a mistake in the meter of the verse. 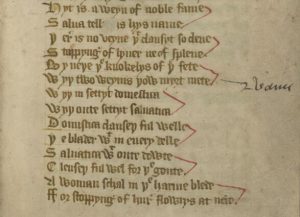 However, the above-mentioned instances of censorship concerning the penis, on folios 35 verso to 36 recto, are the only points where a scribe has replaced a Middle English word with its Latin equivalent. This is not a correction, but rather an exchange of one language, tradition and semiotic relationship for another.

The scribe that replaces ‘pyntell’ with its Latin equivalent writes in a more formal style than the scribe of the recipes. Where the hand of the recipes is fluid and loose in its style, taking up a lot of space on the page, the gloss is much tighter and more compressed. The glossing hand writes in a thick black style that resembles the more formal scripts found earlier in the manuscript. 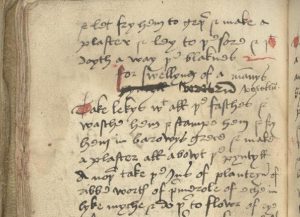 Curiously, next to the gloss of folio 35 verso, a different, later scribe writes the word ‘veretrum’ again. Perhaps the scribe deemed the original gloss to be illegible, as this repeated word is written in a thinner hand with greater clarity. Still, it is interesting that this scribe reproduces the Latin word rather than the original Middle English term.

One can only infer that the exchange of Middle English for Latin is done in the interest of taste. The word ‘pyntell’ had vulgar, colloquial connotations that were not shared by ‘veretrum’. Undoubtedly the penis was a delicate issue for medieval readers, since in visual depictions of the male body in manuscripts the male member is often covered, and images in which the member is exposed are sometimes censored. 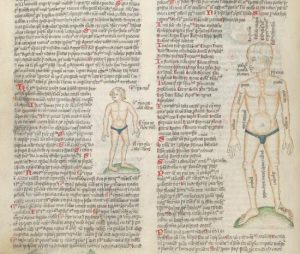 The censorship of MS. 406 allowed readers educated in Latin to comprehend the treatments, but others would have been ignorant of what the recipes concerned. However, each recipe contains the word ‘pyntell’ without censorship within the body of the text. Perhaps the scribe who changed the title of these recipes believed that the word did not need suppression in the main body of the text because it was less noticeable.

Latin was used to make access to texts more exclusive in other contexts, such as the Latin charm against pestilence that appears in another Middle English manuscript held by the Library, MS. 404. The modification of these recipes in MS. 406 exemplifies how medieval manuscripts can reflect the intervention of multiple scribes, and reveals that one scribe in particular felt the need to censor this specific Middle English word for the manuscript’s readers.

A similar example of censorship is found in another copy of John of Burgundy’s ‘Practica phisicalia’: Montreal, Osler Library, Bibliotheca Osleriana 7591. This manuscript is censored in the same section of the text as MS. 406. However, Osler 7591 does not obscure words, but rather two leaves have been carefully cut out of the manuscript. These leaves would have contained almost all of the recipe ‘Ffor swellyng of ballokes’ (p. 78) and the entirety of the recipe ‘Ffor ache in mannes lendes [loins or genitalia]’.

We can be sure that two leaves are missing because the quire (gathering) in which these recipes are partially contained (quire six of ten) is the only quire of six leaves in the entire manuscript. The rest of the quires are made up of eight leaves. One can also see the remnants of the excised leaves in the gutter of the codex. 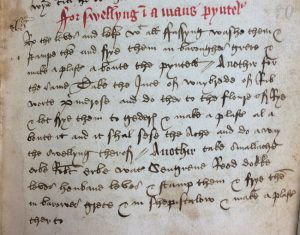 Adding to this, the recipes concerning the penis and testicles that do survive in Osler 7591 are the only recipes in the entire manuscript that feature manicules (pointing hands) drawing attention to their titles. This suggests that they were at some point considered notable. Perhaps the two missing leaves were removed by a reader for ease of access in continued consultation. Equally, the leaves may have been taken out as an act of censorship, because the owner of the manuscript did not appreciate the attention that they received.

The Osler and Wellcome manuscripts examined here reflect a trend that started in the late medieval period, where owners of manuscripts became increasingly concerned with obscuring references to reproductive organs. This was often done because these owners considered the content to be indecent. Whether through the use of Latin or by physically excising leaves, the interventions in these manuscripts provide a clue as to how such codices were treated by late medieval and post-medieval readers.

Joan Cadden, ‘“Nothing natural is shameful”: vestiges of a debate about sex and science in a group of late-medieval manuscripts’, Speculum, 76 (2001), 66–89.