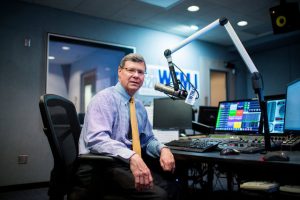 After nearly 25 years, I’m stepping down from my daily conservative talk radio show at the end of this month. I’m not leaving because of the rise of Donald J. Trump (my reasons are personal), but I have to admit that the campaign has made my decision easier. The conservative media is broken and the conservative movement deeply compromised.

How on earth did that happen?

When I wrote in August 2015 that Mr. Trump was a cartoon version of every left-wing media stereotype of the reactionary, nativist, misogynist right, I thought that I was well within the mainstream of conservative thought — only to find conservative Trump critics denounced for apostasy by a right that decided that it was comfortable with embracing Trumpism. But in Wisconsin, conservative voters seemed to reject what Mr. Trump was selling, at least until after the convention.

To be sure, some of my callers embraced Mr. Trump’s suggestion for a ban on Muslims entering the country and voiced support for a proposal to deport all Muslims — even citizens. One caller compared American Muslims to rabid dogs. But right to the end, relatively few of my listeners bought into the crude nativism Mr. Trump was selling at his rallies.

What they did buy into was the argument that this was a “binary choice.” No matter how bad Mr. Trump was, my listeners argued, he could not possibly be as bad as Mrs. Clinton. You simply cannot overstate this as a factor in the final outcome. As our politics have become more polarized, the essential loyalties shift from ideas, to parties, to tribes, to individuals. Nothing else ultimately matters.

In this binary tribal world, where everything is at stake, everything is in play, there is no room for quibbles about character, or truth, or principles. If everything — the Supreme Court, the fate of Western civilization, the survival of the planet — depends on tribal victory, then neither individuals nor ideas can be determinative. I watched this play out in real time, as conservatives who fully understood the threat that Mr. Trump posed succumbed to the argument about the Supreme Court. As even Mr. Ryan discovered, neutrality was not acceptable; if you were not for Mr. Trump, then you were for Mrs. Clinton.

The state of our politics also explains why none of the revelations, outrages or gaffes seemed to dent Mr. Trump’s popularity. In this political universe, voters accept that they must tolerate bizarre behavior, dishonesty, crudity and cruelty, because the other side is always worse; the stakes are such that no qualms can get in the way of the greater cause.

For many listeners, nothing was worse than Hillary Clinton. Two decades of vilification had taken their toll: Listeners whom I knew to be decent, thoughtful individuals began forwarding stories with conspiracy theories about President Obama and Mrs. Clinton — that he was a secret Muslim, that she ran a child sex ring out of a pizza parlor. When I tried to point out that such stories were demonstrably false, they generally refused to accept evidence that came from outside their bubble. The echo chamber had morphed into a full-blown alternate reality silo of conspiracy theories, fake news and propaganda.

And this is where it became painful. Even among Republicans who had no illusions about Mr. Trump’s character or judgment, the demands of that tribal loyalty took precedence. To resist was an act of betrayal.

When it became clear that I was going to remain #NeverTrump, conservatives I had known and worked with for more than two decades organized boycotts of my show. One prominent G.O.P. activist sent out an email blast calling me a “Judas goat,” and calling for postelection retribution. As the summer turned to fall, I knew that I was losing listeners and said so publicly.

And then, there was social media. Unless you have experienced it, it’s difficult to describe the virulence of the Twitter storms that were unleashed on Trump skeptics. In my timelines, I found myself called a “cuckservative,” a favorite gibe of white nationalists; and someone Photoshopped my face into a gas chamber. Under the withering fire of the trolls, one conservative commentator and Republican political leader after another fell in line.

How had we gotten here?

One staple of every radio talk show was, of course, the bias of the mainstream media. This was, indeed, a target-rich environment. But as we learned this year, we had succeeded in persuading our audiences to ignore and discount any information from the mainstream media. Over time, we’d succeeded in delegitimizing the media altogether — all the normal guideposts were down, the referees discredited.

That left a void that we conservatives failed to fill. For years, we ignored the birthers, the racists, the truthers and other conspiracy theorists who indulged fantasies of Mr. Obama’s secret Muslim plot to subvert Christendom, or who peddled baseless tales of Mrs. Clinton’s murder victims. Rather than confront the purveyors of such disinformation, we changed the channel because, after all, they were our allies, whose quirks could be allowed or at least ignored.

We destroyed our own immunity to fake news, while empowering the worst and most reckless voices on the right.

This was not mere naïveté. It was also a moral failure, one that now lies at the heart of the conservative movement even in its moment of apparent electoral triumph. Now that the election is over, don’t expect any profiles in courage from the Republican Party pushing back against those trends; the gravitational pull of our binary politics is too strong.

I’m only glad I’m not going to be a part of it anymore.