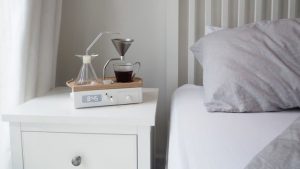 Getting up early in the morning to the annoying sound of an alarm clock is one of those painful experiences many of us have to go through every single day, but perhaps throwing in the smell of freshly brewed coffee might improve things a bit. That’s what the makers of The Bariseur alarm clock are counting on, anyway.

The Bariseur is an automatic coffee maker and tea brewer that also doubles as an alarm clock that wakes you up to the sound of bubbling hot water and the smell of fresh coffee or loose leaf tea. Inventor Joshua Renouf says his ingenious creation “encourages a ritual in order to establish a routine before going to sleep, signalling to the body and mind that it is time to unwind and relax. The fresh coffee or tea is used as a natural aromatic relaxant throughout the night then stimulates the user in the morning once brewed.”

Making use of induction heating and several steel ball bearings sitting at the bottom of a glass beaker, The Bariseur heats the water to 94 degrees Celsius. Steam pressure is produced, forcing the water out of the vessel and into the stainless steel filter, where coffee or tea have to be placed, brewing the user the perfect morning beverage. The designer alarm clock/automatic brewer also comes with a peltier cooler for a small cup of milk, as well as a sealed drawer for sugar and other necessities. 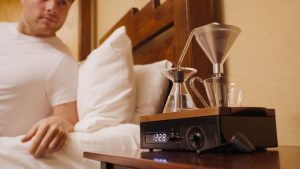 Perfectly functional yet aesthetically pleasing, The Bariseur – a combination of “barista” and “connoisseur” – is apparently very simple to set up and use on a daily basis, easy to clean and perfectly safe, since the heating surface stays cool due to induction. 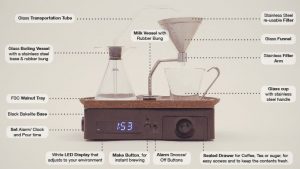 The Bariseur was first announced in 2014, but Renouf and his team spent the last two years refining its design and features to make it viable for mass production. Now, to help them get over the last hump, the designer has launched a Kickstarter crowdfunding campaign for £380,000 ($550,000). Backers will be able to buy the unique alarm clock for £265 (around $385) with more discounts promised to those who act quickly. At the time of this writing, the project had successfully raised £200,623, with 17 days to go. 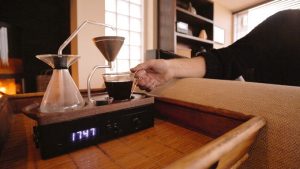 If you’re looking forward to waking up to a cup of fresh coffee every morning, you’re going to have to wait a little while longer. The manufacturing process for The Bariseur alarm clock is expected to take another year, so you’ll probably be taking your first sip in June 2017.