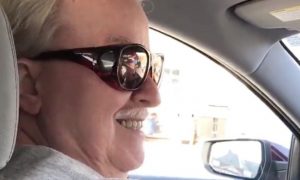 When you logged into AOL in the 1990s, you were greeted with the voice of Elwood Edwards. Last night, Brandee Barker was headed to one of Hillary Clinton’s Ohio campaign headquarters for canvassing when she happened to meet Edwards. He was her Uber driver!

OMG OMG my @Uber driver in Ohio was the You’ve Got Mail voice Elwood Edwards!!! I made him say it in this video #GOTVforHRC pic.twitter.com/Jgcl7v040D

Edwards, a longtime voice actor, recorded the famous famous phrase — along with others like “Welcome,” “File’s Done” and “Goodbye” — because of his wife. Back in the late 80s she worked for Quantum Computer Services, the company that would later become AOL, and she overheard the company’s CEO saying he wanted a voice to notify people when they receive email.

She told them about her husband, he recorded the phrases on a cassette tape and became the internet’s voice. He was paid $200 for the voice over, he told Barker.

In addition to his voice over work, Edwards worked for several years as a news editor at a TV station in Cleveland before recently retiring.