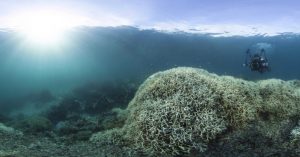 Bleaching occurs when overly warm ocean waters cause coral to expel the algae living inside of it, which turns the coral white and erodes its structures. (Photo: XL Catlin Seaview Survey)

More than 90 percent of the Great Barrier Reef (GBR) is suffering some level of coral bleaching and will likely never return to its original state, a new study from the Australian Research Council Center of Excellence for Coral Reef Studies released Tuesday confirms.

“We’ve never seen anything like this scale of bleaching before,” said Terry Hughes, director of the research council. “In the northern Great Barrier Reef, it’s like 10 cyclones have come ashore all at once.”

The researchers, who conducted aerial surveys of hundreds of reefs in the system and published their findings in the journal Science, said although a strong El Niño season exacerbated the effects, climate change is the underlying cause of the bleaching event—which means the destruction is likely to continue.

Bleaching occurs when overly warm ocean waters cause coral to expel the algae living inside of it, which turns the coral white and erodes its structures. That, in turn, provides less shoreline protection and destroys natural habitats for marine life.

The current devastation, which is part of the third-ever global coral bleaching event in history, dwarfs previous events “by a long mark,” Hughes said. The northern portion, where 80 percent of reefs have been “severely” bleached and 50 percent are already dead, “won’t get back to what it was, certainly not in my lifetime,” Hughes said.

In a best-case scenario, recovery of the northern GBR would take decades, and “even then the reef will be only a shadow of its prebleaching self,” the report states. Hughes told reporters on Tuesday that “close to 50 percent of the coral is already dead or dying.”

Environmental activists say addressing the issue will require moving away from the use of fossil fuels.

Greenpeace Australia Pacific reef campaigner Shani Tager said, “This is heartbreaking news that the Australian government must act on. It’s not good enough for them to say they care about the Reef while they keep backing the coal industry and avoid tackling climate change.”

Indeed, Environment Minister Greg Hunt—who called the event “significant,” and added that the government is taking the findings seriously—in December approved expansion of a coal terminal in Abbot Point in northern Queensland, despite outrage from environmental groups.

“The most pristine part of the Great Barrier Reef is on the brink of permanent damage,” Tager continued. “Now is the time to act, to put the brakes on the coal industry before this sort of devastating bleaching becomes an annual event.”

“Mining and burning coal is driving climate change and warming our waters and the reef is getting more and more fragile as a result,” she said.

The findings are expected to put additional pressure on Australian Prime Minister Malcolm Turnbull ahead of a federal election in July.