The question, and then the non-existent pause

It was admittedly a POV (point-of-view) documentary, and that’s fine.  What is NOT fine is to misrepresent the facts to make a point.

The 8 seconds of silence following the question did not happen.  Responses were immediate and in-depth.

Kouric owned up to what she called a “misleading” edit, shoving responsibility to her director, Stephanie Soechtig, who suggested the edit for “dramatic effect”.

No, Katie – YOU are ultimately responsible for the presentation and the implications it gives.  YOU could have stepped in and demanded that your interview with these people be accurately represented.  Instead, YOU chose to go with the “dramatic effect” to give a false impression.

And shame on you for it!

I actually likely agree with much of what Couric has to say.  I support the second amendment just as the first or any other with sensible regulations in law – no right is absolute and without restriction.

I believe background checks need to be more thorough, we need to better address mental illness, and some things should be out of bounds – armor-piercing ammunition, for example, fighter jets, bazookas, nuclear weapons, things like that (don’t laugh, you can find nuts who believe these should be protected!).

What I cannot support and do not believe in is journalistic malpractice, which this was.  No matter how much you disagree with someone – whether it’s the NRA, the KKK, or any other group, you completely lose your integrity and credibility as a journalist the moment you intentionally misrepresent them.

Documentaries, POV and otherwise, are a sort of “sacred ground”.

MSNBC did the same thing once, remember that?  They were talking about white men and their guns, and showed a pic of a protest – saying in the following clip, “A man of color in the presidency and white people showing up with guns strapped to their waists…”

The problem?  The clip was edited to match the anchor’s words.  In actuality, the person in the clip was a black man, caught from the same angle by a CNN camera.  MSNBC acknowledged and apologized for the “edit”. 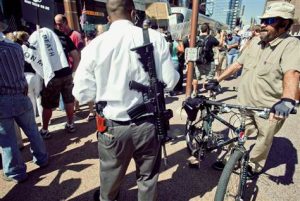 I know I will have many liberal friends incensed that I dare to mention this.  I’ll receive, “Well you KNOW it’s really true” messages and such.

It doesn’t matter what I or you or anyone else believes is true.  To intentionally misrepresent anyone – no matter how bad we think they may be – is unethical journalism and should cost jobs.

I’m sure we all remember the intentionally false and misleading edits created by anti-abortion activist David Daleiden, leading to a host of falsely-founded legislative inquiries.

Daleiden has actually been criminally indicted in Texas because of that, and that’s good!  Not only was his “journalism” unethical, he lied about it in court – hence the criminal charge.