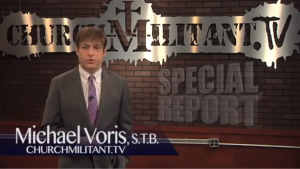 Some people find religion after living through a traumatic life threatening event like an earthquake or car crash. Others find God when they commit an act that is so despicable they cannot forgive themselves and need spiritual cleansing just to be able to move on with their lives. Some even find God when the almighty creator gives their mother stomach cancer to stop them from being gay.

This week, Michael Voris, who affectionately calls himself “The Church Militant”, released a new YouTube video entitled “Limiting God” where the once wayward Catholic gives thanks for his mother’s painful death from stomach cancer, saying it cured him of his homosexuality. A grace that I am sure will make for some pretty uncomfortable moments around the Voris Family  dinner table this Thanksgiving.

In his video, Voris tells the tale of a lost soul drowning in a sea of lust and sexual perversion. Voris goes on to admit to his many homoerotic liaisons, yet denies he himself was ever gay or bisexual, claiming he was only “seeking solace in lust and surrendering my masculinity.”

From the outside, I lived the lifestyle and contributed to the scandal in addition to the sexual sins. On the inside, I was deeply conflicted about all of it.

A lifestyle he says led to the his mother falling ill with cancer and eventually dying as part of Gods benevolent plan to change his sinful sexual lifestyle. At his mother’s funeral Voris recalls,

I pledged at her coffin that I would change. I said, ‘Mom, what you went through for me, you will not have gone through in vain.’ I returned fully and completely to the faith.

After his mother’s passing Voris says he overcame a complete transformation and his masculinity was restored, then gleefully went on to proclaim,

I was thrilled, over the top with gratitude, with what God had done for me through my mom and her suffering.

Perhaps what is most disturbing about Voris’ twisted perspective about his mother’s death, is his own ego. What Voris is essentially saying is that who he chooses to sleep with is so important to God that he would smite Voris’ mother with a terrible disease just to get Voris back on the straight and narrow and playing for team hetero again.

Voris’ insane religious outlook can only make me wonder what would happen if his father fell ill with some horrible affliction. Would he then have to go back to a homosexual lifestyle? What if his sister develops diabetes? Does that mean God wants him to take a cooking class at the local learning annex? The possibilities seem endless for a man who thinks the universe literally revolves around him. Let’s just hope Voris continues to live a righteous life, otherwise his neighborhood may soon be decimated by a swarm of locusts!