Shakespeare features twin characters in two of his comedies, The Comedy of Errors (1593) and Twelfth Night (1601), capitalising on the potential for mistaken identity and misdirected affection that twin likeness offers in both plays. The Comedy of Errors is particularly farcical in its presentation of a master and his servant arriving in a city where, unbeknownst to them, their twin brothers currently reside. Twelfth Night equally utilises the confusability of twins to drive its plot, staging separated twins who unknowingly find themselves in the same location. In this representation of twinship, Shakespeare draws on the Plautine tradition, which stresses the comic potential of the twin relationship. 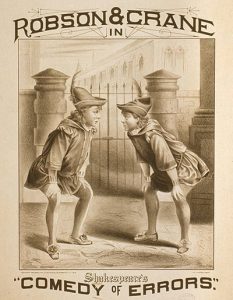 Within early modern England, however, twins were not always associated with comedy. Playwrights such as Webster and Ford link their twin characters with tragedy, staging incestuous, mad, and murderous twins, a representation of twinship which more closely aligns with the unnatural associations early modern ideas about twin conception carried.

The most common explanation for twin conception was an occurrence called superfetation. In Microcosmographia (1615), Helkiah Crooke provides a definition for this type of double conception: “Now this Superfetation is nothing else but a second conception, when a woman already with child accompanying with a man conceiveth again, as if it were a new conception above another before conceived.” 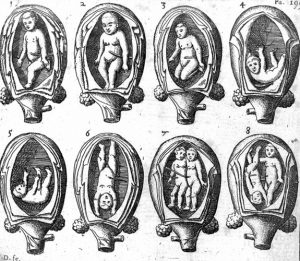 Eight representations of the foetus in the womb. The Midwives Book by Jane Sharp, 1671.

This explanation, however, raises another question related to twin conception, which carries moral, as well as medical implications – “Why women desire the act of copulation after they have conceived, when Beasts do not.” Nicholas Culpeper, in A Directory for Midwives (1651), answers this question, “The very truth is, the Curse of God for Adams first sin lies more heavily upon Man, than it doth upon the Beasts, and Lust is a great part of this Curse, and the Propagation of many Children at once an effect of that intemperancy.” A second conception thus explains both how and why a twin birth occurs, positioning excessive female desire as the cause behind a mother’s double delivery.

Interpreting the mother of twins as sexually excessive would have seemed particularly logical to an early modern audience, as the abnormality of a child was typically associated with the sin committed by their parents in this period. This understanding emerges most famously in the belief that the mother’s imagination could impact the appearance of her child. However, the case of twin births also demonstrates the practice. While twin births are abnormal because of their likeness, they are also apart from the norm in that they are inherently excessive. Thus, in portraying the mother as inordinate in her desire, Culpeper implicitly blames her for her abnormal birth, suggesting her excessive sexuality has resulted in similarly excessive children.

The mother of twins, accordingly, occupies a precarious position in early modern England, viewed as potentially deviant because of her propagation of multiple children. This vulnerability is further demonstrated in Thomas Browne’s Pseudodoxia Epidemica (1646), as he builds on Culpeper’s condemnation of female desire with the suggestion of adultery: “Nor indeed any absolute securitie in the policy of adultery after conception; for the Matrix . . . after reception of its proper Tenant, may yet receive a strange and spurious inmate.” Moreover, he surprisingly draws on the same source as Shakespeare to support this accusation, “as is confirmable by many examples in Plinie, by Larissaea in Hippocrates, and that merry one in Plautus.” 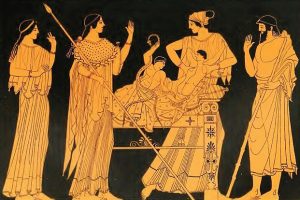 The ‘merry one’ Browne references is Amphitryon, a source for The Comedy of Errors. Dramatising the birth of Hercules, Amphitryon stages a twin conception resulting from adultery. In the play, Alcmena is impregnated by both her husband and Jupiter and, accordingly, delivers twin sons belonging to different fathers. Shakespeare, however, omits these negative associations from his adaption. Instead, he draws on Amphitryon as the inspiration for the double sets of twins in The Comedy of Errors, a detail that heightens, rather than diminishes, the comic potential of the twin relationship.

As twinship carried such negative associations in early modern England, it is unusual that Shakespeare ignores these possibilities in his dramatic depiction of twin siblings. Perhaps Shakespeare’s comic portrayal has something to do with his own position as the father of twins. His twin children, Hamnet and Judith, were born in 1585, well before he wrote the Comedy of Errors and Twelfth Night, and thus potentially an inspiration for his twin characters.