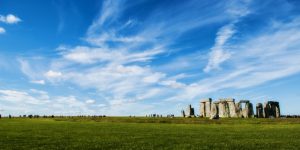 There is something mysterious about Stonehenge. I have a very distinct memory of visiting Stonehenge as a child, seeing the standing rocks in the distance Perhaps it was the fog and grey skies that imparted a mystical feeling in the air, but something about this place definitely sticks with you. It isn’t just the personal and emotional feelings towards Stonehenge that shape our perceptions. We still know so little about what this place was used for, the people who constructed it, and how they were able to construct it. It seems every year we get a little closer and a little farther away from understanding. There have been some fascinating new discoveries at the site over the last decade- new burials, new locations of stones, new technological advances revealing more of the landscape. And recently, archaeologists examined the cremated remains found at the site more clearly. You know me- I can’t resist a good cremation study!

First, a little background to the site if you’re not familiar with it already. Stonehenge was built during the Late Neolithic and Early Bronze Age, and is located in Wiltshire, southern England. The monument was constructed in five stages between 3000 BCE and 1500 BCE. In the first stage, a circular ditch was constructed for a circle of small standing stones, known as ‘bluestones’ from Wales, which were located in features called Aubrey Holes. In the second stage, the larger inner circle of stones was erected. This second stage is the most recognizable as it consists of the large sarsen stones. Since the 1920s, it was known that the site of Stonehenge contained burials, and in 2003, the Stonehenge Riverside Project sought to explicitly address the relationship between burials and the monument (Parker Pearson et al. 2009).

The human skeletal material found at Stonehenge primarily consists of cremated bone. In the 1920s, William Hawley excavated a large portion of the cremated bone, and then reburied it in one of the Aubrey Holes, specifically #7. Hawley had excavated the cremated remains from 23 different Aubrey Holes found primarily in the south-eastern half of Stonehenge, as well as taking samples from the ditches and center of the monument. Hawley found only a single grave good: a polished gneiss mace-head, but did recover a number of antler and animal bone pyre goods from Aubrey Holes 5, 12, 13 and 24, and from a deposit in the ditch. When excavating the burials, Hawley noted that many of them were circular, likely indicating that they had been placed in organic bags of some sort as their container. No urns were recovered. In 1935, the bags of cremated bone that were recovered from the excavations were reburied on site in a single Aubrey Hole. Sadly, due to this treatment, it means the remains that came from 59 different locations became completely mixed and archaeologists cannot discern where their original contexts were.

However, during the re-excavation of Aubrey Hole 7 to recover these commingled remains, archaeologists found a previously unexcavated cremation burial of an adult woman. Due to this find, it is likely that Hawley’s original excavation was not as thorough as previously thought- meaning that there may still be more burials yet undiscovered, and that re-analysis of the commingled remains from Aubrey Hole 7 is an important next step. A new article by Willis et al. (2016) discusses the results of the re-analysis of the human remains from Stonehenge. 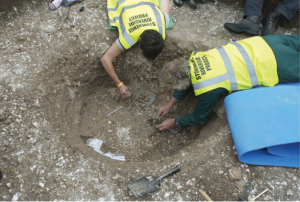 Cremated human remains being excavated from the base of Aubrey Hole 7 by Jacqui McKinley and Julian Richards. / The bone fragments were deposited in this re-opened pit in 1935 (photograph: Mike Pitts, from Willis et al. 2016)

The mix of cremated bone from Aubrey Hole 7 includes a minimum number of 22 adults and 5 sub-adults. Hawley had recorded that he excavated 59 cremation burials- so this estimate of 27 individuals is low, likely due to the fragmented nature of human remains. Of the adult remains, 9 could be identified as male, and 5 as female. The most common pathology found in the remains was damage to the spine, most specifically osteoarthritic wear and tear. Periostitis was also identified; this pathology consists of new bone growth due to disease, trauma or overuse of the limb. The average date for the remains was between 3100 and 2600 cal BCE based on radiocarbon dating. This date places the human remains within the first two stages of construction of Stonehenge.

Based on their knowledge of the site and period, Willis et al. (2016) conclude that “Stonehenge was used as a cremation cemetery for mostly adult men and women for around five centuries, during and between its first two main stages of construction. In its first stage, many burials were placed within and beside the Aubrey Holes. As these are believed to have contained bluestones, there seems to have been a direct relationship between particular deceased individuals and standing stones. Human remains continued to be buried during and after Stonehenge’s second stage, demonstrating its continuing association with the dead.” Later burials found at Stonehenge are found around the periphery of the site; indicating that the use of the monument changed from a direct association with the recently dead to a more distant understanding of the site as the location for collective ancestors. Instead of it being a burial site, it became a memorial for ancestors, an argument that is consistent with previous interpretations by Parker Pearson (2012).