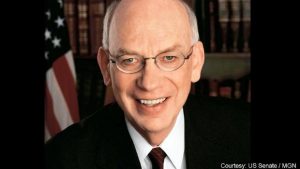 On the fourth floor of George Washington University Hospital, former Republican Senator Bob Bennett lay in his hospital bed partially paralyzed after suffering a stroke just 48 hours prior. Bennett fought a yearlong battle with pancreatic cancer before succumbing to the disease at his home on May 4th.

As the former senator lay in bed, he was inundated with well wishes from friends and former aides while doctors and nurses hustled in and out of his room.

However, Bennett did find a quiet moment of reflection while his son Jim and his wife Joyce sat with him.

With a slight slur in his words, the former senator expressed his profound dying wish:

Are there any Muslims in the hospital?” he asked.

I’d love to go up to every single one of them to thank them for being in this country, and apologize to them on behalf of the Republican Party for Donald Trump,” Bennett told his wife and son, both of whom relayed this story to The Daily Beast.

The rise of the presumptive Republican presidential nominee disgusted Bennett, who was once a three-term Utah senator. Bennett lost his seat during the Tea Party insurgency in the 2010 midterms. It was his vote for the Trouble Asset Relief Program (TARP) that many speculated proved the fatal blow to his political career.

Bennett expressed his support for the Muslim community during a hospital interview with Deseret News, a local Utah news outlet:

There’s a lot of Muslims here in this area. I’m glad they’re here,” the former senator told the newspaper in April, describing them as “wonderful.

His son Jim, said that his father felt that he needed to say something about Donald Trump’s message of intolerance:

In the last days of his life this was an issue that was pressing in his mind… disgust for Donald Trump’s xenophobia,” Jim Bennett said. “At the end of his life he was preoccupied with getting things done that he had felt was left undone.

In response to the deadly Paris terror attacks in March, Trump was the first and only GOP presidential candidate to propose unambiguously banning all Muslim immigrants from entering the U.S., at least until we “understand this problem.”

According to Bennett’s wife, Trump’s xenophobic rhetoric outraged the former senator triggering his conscience to at least speak out against the Billionaire’s poisonous message.

In December, as Bennett and his family flew from Washington D.C. to Utah for Christmas, the former senator approached a woman wearing a hijab while at the airport.

He would go to people with the hijab [on] and tell them he was glad they were in America, and they were welcome here,” his wife said. “He wanted to apologize on behalf of the Republican Party.

He was astonished and aghast that Donald Trump had the staying power that he had… He had absolutely no respect for Donald Trump, and I think got angry and frustrated when it became clear that the party wasn’t going to steer clear of Trumpism,” his son relayed.

Bennett’s Mormon faith also played an influential role in his opposition to Trump’s message. After the billionaire had proposed singling out Muslims for religious persecution, the Latter Day Saint Church issued a statement coming out in support of the Muslim community. The church quoted their founder who said he would “die in defending the rights… of any denomination who may be unpopular and too weak to defend themselves.”

That was something my father felt very keenly—recognizing the parallel between the Mormon experience and the Muslim experience. [He] wanted to see these people treated with kindness, and not ostracized,” Jim Bennett said.

A former aide to the Senator recalled an encounter in which she lied to a TV producer to excuse her boss’s late arrival:

I never want you to lie for me, and I’ll never ask you or any of my staffers to lie for me,’” the staffer, who asked to remain anonymous, recalled Bennett saying to her. “I realized that I was working for a man of great integrity. It was something kind of stuck with me.