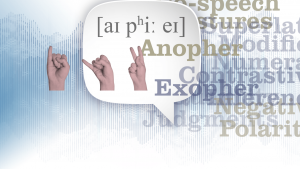 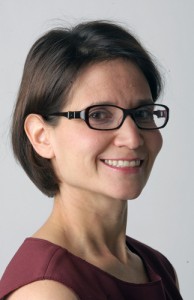 Dorothy Ahn stood behind a video camera, recording a fellow researcher reading simple sentences — “One girl is my friend. That girl plays soccer”— while pointing for emphasis.

The filming was part of a research experiment comparing speech gestures in English and Korean, among half a dozen studies in Kathryn Davidson’s young Meaning and Modality Linguistics lab — which, as one of the few such facilities in the humanities, is something of an experiment in itself.

“Experimental study is crucial to my work. Becoming part of this lab has allowed me to develop this aspect fully,” said Ahn, a fifth-year graduate student in semantics and psycholinguistics. “Before joining this lab, I did some of my experimental work [elsewhere], but most of my current experiments would have had to find some other department to house them.”

Created two years ago when Davidson joined the linguistics faculty, the Meaning and Modality facility, known to its users as the M&M lab, studies meaning across natural languages, both spoken and sign.

Much of its work involves behavioral experiments on questions in semantics, which models linguistic meaning using tools from formal logic. Bilingualism and gesture prosody (the patterns of intonation and stress) are also areas of study. The lab has run experiments in Korean, French, Romanian, Malayalam, Italian, Japanese, and Chinese, along with American, Nicaraguan, and Brazilian sign languages.

The lab functions as a controlled environment in which to find linguistic touchstones in languages, as well as to learn some of the similarities and differences contained in them, to understand better how human communication operates.

The lab, Davidson said, formalizes and encourages “shared knowledge. It’s helpful to be in the same space, especially in academia, because we’re trying to figure out things we don’t know about yet. In a company, it might also be important to work together in a shared space, but it might already have institutionalized manuals for important procedures. Here, we’re trying to generate new knowledge, and working to come up with new manuals for how to do what we need to do.

“The knowledge isn’t just sitting on a shelf, ready for us to pull it out. We need to work together to solve problems that arise in language data collection and analysis.” 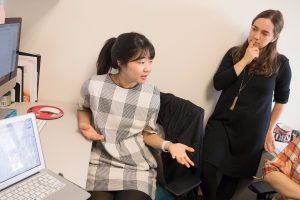 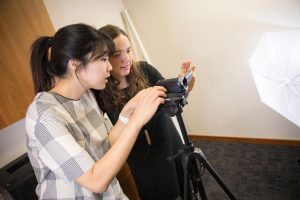 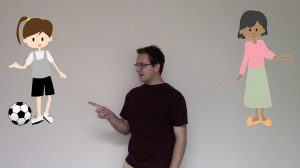 One project involves investigating how “negative polarity items” (words such as “ever” and “yet,” which are used in conditional sentences) may be blocked in some languages. The idea is to help uncover why they exist in languages at all.

Undergraduate Anna Alsop describes the lab as a second home, confirming for her that she made the right decision to concentrate in linguistics.

“I came into College interested in majoring in either chemistry or computer science, but I also really like languages and was looking for a way to combine all of these interests,” said the Kirkland House senior, who is studying contrastive inference in English and Japanese. “Linguistics is very rigorous, and its approach is very scientific and logical and inquiry-oriented. Many students I meet on campus are interested in my coursework and research. They don’t just say, ‘Oh yeah, it’s Noam Chomsky.’ They are more open to my explaining it.”

Alsop said the synergy and teamwork fostered in the lab are palpable, and have provided her with exciting opportunities. In January, she presented at the annual meeting of the Linguistics Society of America in Salt Lake City, and last fall presented at the inaugural Ivy League Undergraduate Research Symposium at the University of Pennsylvania.

“I feel much more at home in the lab and in the department. It’s cool to brush shoulders with graduate students and postdocs,” she said. “What Kate does is so broad, and there are so many research questions being tackled that a lot of things overlap. When someone presents in our weekly meetings, it gives someone else ideas: ‘Oh, wow, that’s a different approach. You should look up my write-up to this paper.’”

The lab’s growth has followed increased interest in the department. Davidson’s introductory survey course “Language, Structures and Cognition” has more than doubled in size from 55 students to 120. She also helped bring the course “American Sign Language” back to the curriculum after a 20-year hiatus. That course now has more than 50 students vying for 15 spots, and the lab has been part of the driving force behind renewed interest.

“Kate’s lab has been a very exciting addition to our departmental life, as it provides our students with the possibility of probing their theoretical models in new ways. It is the mix of theoretical and experimental sophistication that Kate impresses upon the activities of her lab that are particularly novel,” said Gennaro Chierchia, department chair and Haas Foundations Professor of Linguistics. 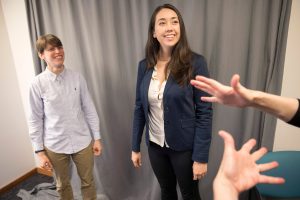 A fifth-year Ph.D. candidate in linguistics studying semantics and pragmatics, Teodora Mihoc, a native speaker of Romanian, has become deeply involved in the lab as both user and manager. She has used lab experiments to understand expressions that contain numerals.

“My original training is in formal semantics, but I’ve come to appreciate that, in a lot of the work I am doing, experimental data can be very handy in both testing predictions coming from theory and further probing unexpected patterns.”

Davidson said the work done in the lab, with its unique focus on understudied spoken and sign languages, is critical knowledge for the wider world.

“Most linguistics research is based on a small number of data points from a small number of languages,” she said. “We’re interest in broadening that data through experimentation in a way that is informed by the productive theories in our field. Involving more languages, especially sign languages, in this sort of research highlights their valuable contributions to humanity.”

Aside from being a place where students run experiments, the lab is also a place that increases the potential for spontaneous interaction. “We learn the tools of the trade from each other — everything to do with experimental design, statistical analysis, etc., but also ways to make sense of our data theoretically. Yesterday I was walking in the lab, and I had a question I was trying to find a solution for. I told another lab member about it, and the ensuing discussion helped me see a solution I couldn’t see before. Today I’m already doing something on it.

“You can’t teach that in a seminar,” Mihoc added. “It’s a doing thing. That’s what you get out of a lab, the how-to.”

For that reason, Davidson wants the lab to feel “porous,” so that Mihoc or any student can spend time there and feel welcome, since that organic process helps critical study happen.

“The idea of collecting data in a more controlled way is new in linguistics in the last 20 years,” she said. “Languages are very different from each other, and we need to have more controlled ways to collect data. It’s the same as an archaeologist digging up a pot. You have to compare it to another one from another country.”