A new exhibition and book explore the complexity of the nude in Renaissance art and the controversies it provoked, revealing parallels to today.

Images of the naked human body provoke conflicting feelings: shame, admiration, curiosity, desire, disgust, anger. This is especially true when these images appear in public spaces, whether physical or virtual. Nudity on European beaches, for example, is falling in popularity because of shame linked to social media. Facebook has drawn ire for removing images of naked bodies by celebrated artists such as Peter Paul Rubens and Pablo Picasso. And here in Los Angeles, art museums are not allowed to display nude images on street banners and billboards because they may offend, but perhaps also because they divert drivers’ eyes from the road. This is why you will see only a discreet detail on the street banners for The Renaissance Nude, an exhibition opening at the Getty Center on October 30.

None of these conflicted responses to the human body, however, is especially new. Ever since the Renaissance of the 1400s and 1500s, the nude—the unclothed human form—has been one of the defining features of art in Europe. Yet artists’ and viewers’ attitudes toward the nude were as varied and complex centuries ago as they are today.

The exhibition The Renaissance Nude (October 30, 2018–January 27, 2019), for which I served as lead curator, explores precisely this theme. It traces the gradual emergence of the naturalistic nude to artistic prominence over the course of more than a century and explores the many ways nudes appeared in art, how and where they were displayed, and how people reacted to them. Along the way, the exhibition and accompanying book explode some long-held myths about the nude in the European art tradition, revealing parallels between Renaissance Europe and our own cultural moment.

Myth #1: Renaissance Europeans Were Comfortable with Nude Bodies in Art

The rise of the nude in art in the Renaissance was driven by a revival of interest in Greek and Roman art, which is centered on the body, and by a rise in the closer study of nature. In Italy during the later 1400s, drawing of undressed models became common practice for artists. Within a few decades, this new practice spread to northern Europe as well. In fact, the dominant role of observing and sketching from the nude in an artist’s training has lasted into our own era.

But the use of the nude in art, particularly religious art, was controversial during the Renaissance. Images of beautiful bodies can be highly sensual, which made some observers uncomfortable—then as much as now.

The classical revival resulted in new types of Christian imagery, such as in the depictions of Christ and Christian martyr-saints as partially or fully undressed heroes. In the exhibition you can see this transformation between two paintings of Christ as the Man of Sorrows, one by the Italian artist Michele Giambono (shown below), and another by his compatriot Marco Zoppo, which shows Christ as a much more muscular, heroic figure. 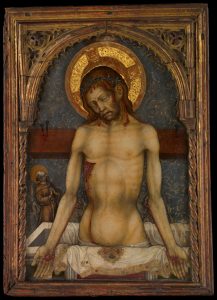 Some argued that endowing Christ and the saints with athletic, finely proportioned bodies helped communicate the virtue of these figures. Others were scandalized.

Saint Sebastian, for example, was a popular Renaissance subject for altarpieces in churches because his protection was invoked against the plague, a recurrent danger that resulted in countless deaths. Since nudity was a feature of Sebastian’s persecution (he was tied to a tree and shot with arrows), and since intellectuals compared him to the Greek god Apollo, many artists depicted him as a handsome and alluring young man. This is shown in the exhibition through examples by painters Antonello da Messina and Cima de Conegliano, and the sculptors Moderno and Donatello. 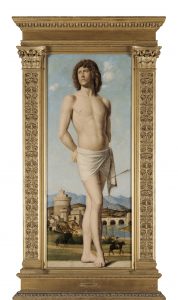 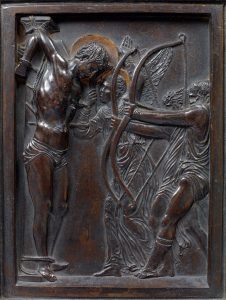 The depiction of St. Sebastian by Moderno shows him, wearing only a pair of sandals, alongside an image of the Virgin and Child and other clothed Christian saints. This degree of nudity, baring even Sebastian’s genitals, may appear strange to us today­; even then it was rare in depictions of Sebastian, and took some explaining to justify. Renaissance humanists defended it by equating bodily perfection with heroism and virtue. In their view, the martyr’s flawless beauty, made fully visible by his total nudity, literally embodies his courage. 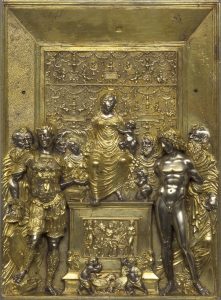 The tiny, precious work in solid silver with gilding was likely made for a prominent humanist patron and viewed only by a small, elite audience. Under such privileged circumstances, it was possible to get away with total nudity in art.

Another example of nudity reserved for elite eyes is the flirtatious, fully nude images of the Christian Old Testament heroine Bathsheba found in French books of hours, which were very popular. They probably succeeded commercially because of their earthy appeal to noble and wealthy Frenchmen, who got a bit of eroticism mixed in with their religious devotions. The appearance of such licentious imagery in handheld private prayer books made access easy to restrict—and to keep away from disapproving eyes.

Nudity in art was at its most controversial when displayed in public. Fra Bartolommeo, a Dominican friar, scandalized a Florentine congregation by painting an altarpiece of a beautiful nude Saint Sebastian wearing only a transparent veil over his genitals. Women found it so alluring, it was said, that the priests deemed it safer for parishioners’ souls to remove it from the church.

Even during the Renaissance, the issue of appropriateness was often in play, in part because in depicting the nude artists were easily tempted, and even encouraged now and again, to push boundaries.

Graceful, classically inspired representations of the unclothed human body became the ideal for artists from the Renaissance onward, first in Italy and France during the 1400s and soon thereafter in the rest of Europe.

As a result, intellectuals devised elaborate justifications for the representation of the sensual nude. A Greek humanist of the time living in Italy did so by admitting that it is sinful to admire a woman for her physical allure, but that depictions of the human body undressed can and should be appreciated as a reflection of the intelligence and abilities of the artist. In the Renaissance, achievement in representing the body became the standard for measuring artistic genius. 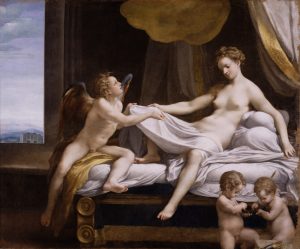 The most famous artists of the Renaissance, such as Michelangelo, Raphael, and Dürer, all created memorable nudes. Prime examples include Michelangelo’s marble statue of David, Raphael’s fresco of the Feast of the Gods in the Villa Farnesina in Rome (represented in the exhibition by a study in red chalk), and Dürer’s engraving of Adam and Eve. These images represent ideals of bodily perfection inspired by the art of ancient Greece and Rome: harmonious proportions, heroic physiques, and unblemished skin. 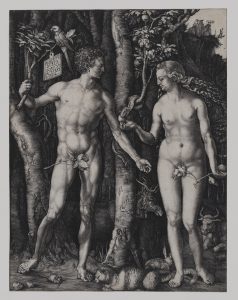 Less well known is the fact that scores of Renaissance artists, not just in Italy (where the Renaissance began) but also across Europe, produced an astonishing variety of nudes. In fifteenth-century France, for example, the physical ideal of female beauty was quite different from that in sixteenth-century Venice—compare this painting by French artist Jean Fouquet with the one below it, by Italian painter Giorgione. 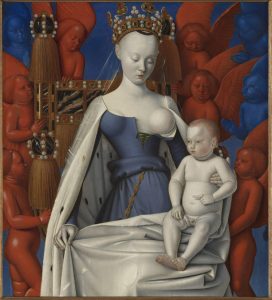 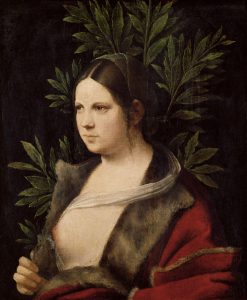 And while many works of art endeavored to represent “perfect” bodily proportions, artists’ notions of perfection were often very different from one another. In his Book on Human Proportions, Dürer made clear that the variety of human body types required sets of proportions appropriate to each. 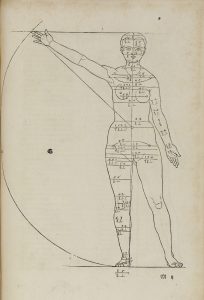 Myth #4: Renaissance Artists Were Only Interested in Ideal Bodies

Expressions of the flawless body were an important manifestation of the nude in the Renaissance. But artists also depicted nude figures in a range of human conditions, both physical and spiritual. Images of the sick, the anxious, and the aged are an important part of the story of the Renaissance nude.

Christian figures and stories were the most widespread subject in Renaissance art, serving to decorate churches, private chapels, and homes. And these religious figures often look very different from the ideal body.

St. Jerome, for example, was revered for his denial of his physical needs. He withdrew to live in the wilderness and focus on prayer and Bible study, limiting himself to the most basic sustenance and allowing his body to become emaciated. Images of the ascetic saint, such as the hand-painted wooden statue in the exhibition shown below, provided the devout with an imposing example of Christian spirituality and discipline. 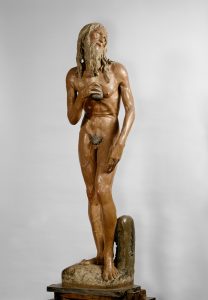 Other Renaissance images of Christ and the saints show quite graphically the consequences of their physical suffering for their faith, including blood issuing from open wounds. The graphic character of such Renaissance nudes conveys notions of spiritual transcendence—a different kind of beauty. 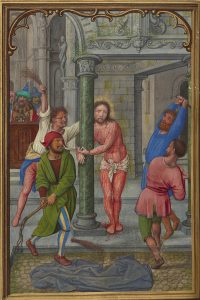 I look forward to visitors’ thoughts and reactions to this and the other works in the exhibition. Approaching the nude in its cultural context will, I hope, offer a basis for many thoughtful discussions of art, gender, power, and our own culture’s diverse responses to the unclothed human body.