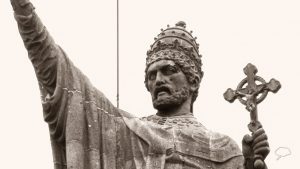 Pope Urban’s motives in preaching the First Crusade are unclear.

Pope Urban’s motives in preaching the First Crusade are unclear. In November 1095, at Cleremont in France, Pope Urban II delivered a sermon which is said to have inspired the people of Europe to undertake the First Crusade. It is fairly certain that the pope preached such a sermon, but little is known about why he did so. There are any number of possible reasons, but only a few can be supported with evidence. Three possible motives are considered the most likely: that it was simply in response to a request from the Byzantine emperor Alexius Comnenus for mercenaries to increase his meagre fighting forces; that it was an attempt to annex the Holy Land and ensure easier access for pilgrims; and that it was aimed at controlling the violence within European society by deflecting the warrior class into a more acceptable avenue for their warlike activities.

According to Hallam(p. 59), Urban’s “precise expectations are impossible to recapture.” She points out that all the accounts of his speech were written after the capture of Jerusalem, and were probably coloured by that acheivement. His letters also speak of the liberation of the Eastern Church, which, according to Hallam, is “a reminder that the expedition was conceived in response to the request from the Byzantine emperor, Alexius I Comnenus, for aid against the Turks” (p59). This theory, that it was simply a response to the emperor’s request for troops, seems reasonable. Alexius would need help against his Arab and Turkish enemies, who had been advancing on the Roman Empire from all sides. He may have planned to take back some of the land that had been lost after Manzikert. However, if this was the case, it does not explain why he was surprised by the arrival of the Crusaders. His daughter, Anna Comnena, describes his reaction:

He (Alexius) had no time to relax before he heard a rumour that countless Frankish armies were approaching. He dreaded their arrival…. So far from despairing, however, he made every effort to prepare for war if the need arose (Book V).

Alexius was not prepared for the arrival of the Crusaders in Constantinople. This could mean one of two things; firstly, that Alexius did not seek help from the pope, or, secondly, that he did not expect the sort of response that he received. Gibbon “likened the emperor Alexius to a Hindu peasant who, after praying for water, was overwhelmed by the flood sent by too generous gods in response” (Newhall, 37).

It is quite likely that the emperor sought help from the west, since there had been many years of defeat and retreat; the Arabs and Turks had gained much of the previous Roman Empire in the east, and the Roman army had almost disappeared since the disaster at Manzikert. Alexius had certainly hired mercenaries for his army before this. Earlier in her history, Anna describes a band of Norman mercenaries, who she calls Kelts, serving in the East Roman army:

Tacticus (the Roman general), who has been mentioned before, was dispatched to Nicea in command of a powerful army. He was instructed to engage whatever armies he met outside the walls…. When he was just outside the city he marshalled his troops in battle array. Suddenly a band of two hundred Turks rode out against him… the Kelts, armed with long lances, charged into them with terrific force; they wounded many and drove the rest back into the citadel (Book IV).

Anna writes as if the Byzantines thought highly of the fighting abilities of the Normans. We can surely assume from this information and surrounding events that Alexius would have called on the help of the mercenaries again if the need were to arise. It is reasonable to suppose that the emperor would have asked for help from the “Franks.” Interestingly, Hallam claims that “such an extraordinary migration was not in the pope’s mind” either. Both key figures were taken by surprise by the response. According to Hallam, “piety was therefore a major motivating force” (p60). The second theory says that the pope wanted to control the Holy Land for the benefit of western Christians. According to an eyewitness of the pope’s Cleremont sermon, the destruction of the holy places was a prominent part of the message that stirred western Christians:

“We want you to know the melancholy reasons which have brought us among you and the peril which threatens you and all the faithful. Distressing news has come to us (as often happened) from the region of Jerusalem and from the city of Constantinople; news that the people of the Persian kingdom, an alien people, a race completely foreign to God, a generation of false aims, of a spirit that broke faith with God, has invaded Christian territory and has devastated this territory with pillage, fire and the sword. The Persians have taken some of these Christians as captives in their own country; they have destroyed others with cruel tortures. They have completely destroyed some of God’s churches and they have converted others to the uses of their own cult. They circumcise Christians and smear the blood from the circumcision over the altars or throw it into the baptismal fonts. They are pleased to kill others…. These Persians have so dismembered the kingdom of the Greeks and have sequestered so much of it that it would be impossible to cross the conquered territory in a two month journey” (Brundage p 18).

These were relatively recent events. The Muslims had controlled the Holy Land for a long time, but had always allowed freedom of worship to the eastern Christians and had allowed free access to pilgrims from the west. Perhaps Urban felt that it was necessary to remove uncertainty by military conquest, but the whole idea of an army from feudal Europe marching east and annexing territory represents an enormous leap of vision. Such a thing had never happened before. It is known that he had an interest in the reunification of the Greek and Roman churches. Perhaps Urban thought it worthwhile to send help to the emperor in the hope of a move towards reconciliation, that is, provided the emperor had in fact requested such help, which is probably quite likely.

The third theory is that the pope was attempting to tackle the problem of civil disorder within Europe. There was no strong political power able to impose law and order over a wide area; Europe was a patchwork of feudal states in which violence and warlike values made a mockery of Christian beliefs. It is possible that the pope saw a “holy war” as an opportunity to rid Christendom of a violent element within it. Again, the Cleremont sermon supports this theory:

This land in which you live, surrounded on one side by the sea and on the other side by mountain peaks, can scarcely contain so many of you. It does not abound in wealth; indeed, it scarcely provides enough for those who cultivate it. Because of this, you murder and devour one another, you wage wars, and you frequently wound and kill one another. Let this mutual hatred stop; let these quarrels abate; let these wars cease; and let all these conflicts and controversies be put to rest….. conquer that land which the wicked have seized, the land which was given by God to the children of Israel, and which, as the scripture says, ‘is all milk and honey'” (Brundage, p. 19).

This theory is also supported by the church’s earlier attempts to impose the “Truce of God” on the knighthood. There is no strong evidence to rule out any of these three possibilities. Perhaps all three elements were important in the pope’s thinking. It is an informed decision to say that pope Urban’s motive for preaching the First Crusade was a combination of the three possible motives discussed.

Originally published by Clio Journal under the terms of a Creative Commons Attribution-NonCommercial 3.0 Unported license.