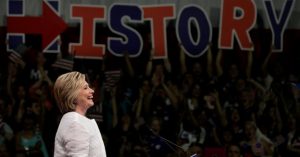 “This campaign is about making sure there are no ceilings, no limits on any of us, and this is our moment to come together,” Hillary Clinton told supporters in Brooklyn Tuesday evening. (Photo: Peter Foley/ EPA)

“As a feminist, I should feel a thrill right now. I grieve that I don’t,” lamented author and activist Naomi Klein.

There is no doubt that history was made Tuesday night after Hillary Clinton swept California, all but sealing her fate as the first woman to become a major party nominee for president.

Even before polls closed in the Golden State, the former secretary of state celebrated the moment at a Brooklyn rally, telling her supporters, “Thanks to you we’ve reached a milestone: the first time in our nation’s history that a woman will be a major party’s nominee.”

“Yes, there are still ceilings to break for women, men, for all of us, but don’t let anyone tell you that great things can’t happen in America,” she said after premiering a stirring videothat highlighted some of the women who fought for equality and liberation.

“This campaign is about making sure there are no ceilings, no limits on any of us, and this is our moment to come together,” she added.

The moment was heralded widely—by older women who never thought they’d live to see this day, by feminist organizations, politicians, the press, and beyond, while social media lit up with celebrations of female triumph.

Terry O’Neil, the president of the National Organization for Women, described the moment as “momentous” and “inspiring.” The New York Times editorial board declared: “This achievement is worth cheering by all, regardless of party, because it further opens the door to female leadership in every sphere.”

However, for many progressive critics—particularly women—the symbolic victory was dulled by the reality of a female candidate whose brand of feminism encompasses problematic policies and undeniable privilege.

Author, activist, and renowned progressive Naomi Klein’s view, which she shared on social media, captured the sentiments of many on the left. Responding to Clinton’s tweet, which said, “Tonight, we can say with pride that, in America, there is no barrier too great and no ceiling too high to break,” Klein wrote:

Bull. Not under the plutocracy u represent. As a feminist, I should feel a thrill right now. I grieve that I don’t. https://t.co/uz0y08mbbi

“We are asked to celebrate the breaking of glass ceilings this week, as the possibility of a female president is hailed as long-overdue feminist triumph? But just what kind of a feminist is Hillary Clinton?” asked author Liza Featherstone on Tuesday during a panel discussion on her recent book False Choices: The Faux Feminism of Hillary Rodham Clinton.

While some pointed to Clinton’s hawkish foreign policy and lackluster environmental record, others, like Klein, noted that the win was only possible because of her elite status, particularly taking issue with her promise of “trickle-down feminism,” as some put it.

Clinton’s likely nomination being a victory for feminism doesn’t mean her agenda is feminist. Alice Paul is probably turning in her grave.

Clinton Corporate Feminism does not trickle down. The same Austerity measures we decry under Ryan were supported under Bill. Wake up.

Changa, an African American attorney, mother, and volunteer with Women for Bernie Sanders, recently explained to the Guardian, “Some women I encounter act as if I’ve betrayed some kind of secret society. I reject this brand of feminism. I’m not only voting for my gender, I’m voting for other issues.”

“There are a lot of issues that affect low-income women, immigrant women and women of color that her brand of doing things is not going to address,” she added.

While this critique is not new, it had a particular resonance last night as progressive women grappled with mixed emotions over Clinton’s landmark achievement.