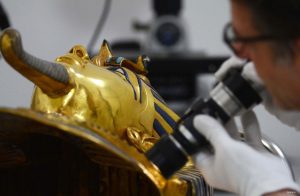 Egypt has unearthed an ancient burial site replete with at least 17 mummies, most fully intact, the latest in a string of discoveries that the country’s antiquities minister described as a helping hand from the crypt for its struggling tourism sector.

The funerary site, uncovered eight metres below ground in Minya, a province about 250 kilometres south of Cairo, contained limestone and clay sarcophagi, animal coffins, and papyrus inscribed with Demotic script.

The mummies have not yet been dated but are believed to date to Egypt’s Greco-Roman period, a roughly 600-year span that followed the country’s conquest by Alexander the Great in 332 BC, according to Mohamed Hamza, a Cairo University archaeology dean in charge of the excavations.

Egypt is hoping recent discoveries will brighten its image abroad and revive interest among travellers that once flocked to its iconic pharaonic temples and pyramids but which have shunned the country since its 2011 political uprising.

“2017 has been a historic year for archaeological discoveries. It’s as if it’s a message from our ancestors who are lending us a hand to help bring tourists back,” Antiquities Minister Khaled Al-Anani told a news conference announcing the find today.

Salah Al-Kholi, a Cairo University Egyptology professor who led the mission, said as many as 32 mummies may be in the chamber, including mummies of women, children and infants.

Archaeologists have excavated a slew of relics in recent months that include a nobleman’s tomb from more than 3,000 years ago, 12 cemeteries that date back about 3,500 years, and a giant colossus believed to depict King Psammetich I, who ruled from 664 to 610 BC.

Tourism Minister Yehia Rashed said last month the new finds could boost tourist arrivals this year to about 10 million, an improvement from the 9.3 million visitors that came in 2015 but still far below the 14.7 million from 2010. No 2016 figure is yet available.

The tourism sector, a crucial source of hard currency, has struggled to regain ground amid a growing number of militant attacks, including two Daesh church bombings last month.