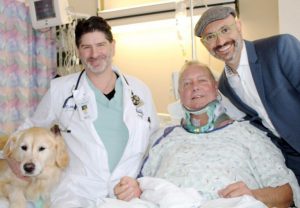 In what can only be described as a heroic act, a golden retriever managed to save his owner’s life by lying on top of him for almost 24 hours to keep him from freezing to death after slipping on ice and breaking his neck.

On New Year’s Eve, 64-year-old Bob (who chose not to reveal his last name for privacy reasons), of Petoskey, Michigan, was watching the Fiesta Bowl between Clemson and Ohio State. It was around 10:30 pm when he decided to go outside and fetch some more wood for his fireplace wearing only long johns, slippers and a shirt. He had taken the short, 15-foot walk to the firewood shed thousands of times before, but this time his poor choice of footwear made him slip, and the fall left him unable to move. The man started screaming for help, but his closest neighbor’s house is a quarter of a mile away, and at that hour, there was no one around to help him. Luckily, his 5-year-old golden retriever came to help.

“I was screaming for help, but my nearest neighbor is about a quarter-mile away and it was 10:30 p.m., but my Kelsey came,” Bob recalls. “By morning my voice was gone and I couldn’t yell for help, but Kelsey didn’t stop barking. She kept barking for help, but never left my side. She kept me warm and alert. I knew I had to persevere through this and that was my choice to stay alive.” 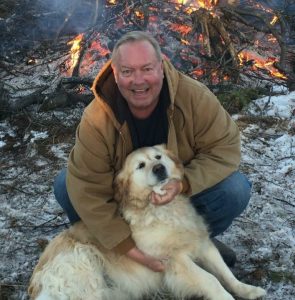 Bob remained paralyzed in the snow for the next 20 hours, in temperatures as low as 24 degrees Fahrenheit. During this time, Kelsey did everything her power to keep him alive, including laying on top of him to keep him warm and  constantly licking his face and hands to help keep him awake. After about 19 hours, Bob lost consciousness, but Kelsey kept barking and howling for help.

Despite the dog’s best efforts, Bob was probably going to freeze to death, if his neighbor Rick didn’t hear Kelsey’s desperate howling. “She was letting out this screeching howl that alerted my neighbor,” Bob told Petoskey News. “He (Rick) found me at 6:30 p.m. on New Year’s Day.” He was taken to the McLaren Northern Michigan Emergency Department, where doctors found that he had a core body temperature under 70 degrees Fahrenheit, in atrial fibrillation, and had a C4-C5 disc herniation. However, they were surprised that despite the long period of time he had spent immobilized in the snow, Bob hadn’t gotten frostbite to any of his extremities.

Spinal injuries often result in permanent paralysis, but Bob was incredibly fortunate. “The miraculous thing that happened is he started moving right away,” said Dr. Chaim Colen, a neurosurgeon at McLaren Northern Michigan. “Most people with spinal cord injuries, they don’t move. It’s tragic and when it’s done, it’s done. I don’t know if it was the cold temperatures that may have helped him or the fact he was laying down on the snow the way he was.”

Before the operation, he told Bob there was a big chance he was never going to walk again, but he was able to move his arms and legs the very next morning. Dr. Colen credited both Rick and Kelsey for keeping Bob alive after his accident. “I think animals can help and his dog really kept him alive and really helped him, he was very fortunate,” the doctor said. 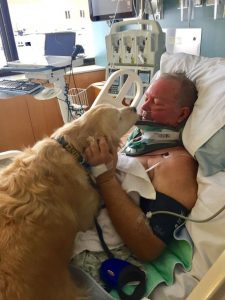 Bob’s daughter, Jenny, told reporters that Kelsey had remained home alone after her father was taken to the hospital. “I knew she was alone and in the house by herself,” Jenny said. “Rick let her out and fed our horses, but I knew I had to get to Kelsey because I knew how scared she must’ve been without him there.”

Kelsey and Bob are inseparable, and go everywhere together, including at the grocery store, so when Jenny came home to check on her, she wasn’t that surprised to find that the dog had brought down nearly all of her father’s clothes from upstairs and made a tent in the living room. She found her laying on top of the clothes. 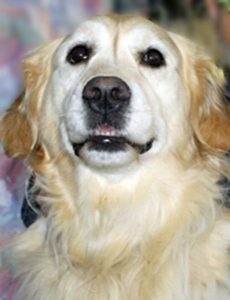 “It’s so emotional thinking about her and you could tell she was bringing everything she had of his to lie on,” Jenny recalled. “She’s the sweetest dog and we all say how smart she is. She really proved it, she’s as smart as we thought.”

Kelsey was 6-months-old when Bob adopted her. She had been brought back to the breeder by her first family, because they had small children and didn’t like that her playing routine sometimes included biting. “The breeder was going to keep her and use her to breed, but Kelsey came up and jumped on my lap and looked at me and my dad and I just said she’s coming home with us, she’s not having babies the rest of her life for some breeder,” Jenny said. “We always knew there was a reason we brought her home with us, and I think now we know why.”