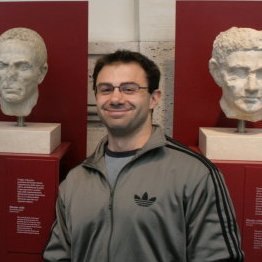 The sixteenth-century artist and art historian Giorgio Vasari gives us a humorous anecdote about Donatello’s Saint Mark. Supposedly, when the patrons first saw the statue standing on the ground they were displeased with it, but Donatello convinced them to let him install it in its niche, where he would finish working on it. The patrons agreed, the statue was installed, and Donatello covered it up for fourteen days—pretending to work on it but in reality not touching it. When it was finally uncovered, everyone viewed the statue with wonder. The only difference was the installation of the work in its proper context. The artist had included distortions to account for the sculpture being seen from below (in its original location its base would be just above the height of an average person—see image at the bottom of this page). Some of these distortions include a torso and neck that are slightly longer than expected, which would be visually corrected when viewed from below (and the neck is hidden by a flowing beard).

Although Vasari’s story is apocryphal, the visual evidence does suggest that Donatello—in this work and others—was keenly interested in viewer perception. This sensitivity to audience and the ability to manipulate his viewers through his works in stone and bronze are part of what makes him such a distinctive figure—and part of why his Saint Mark still has the ability to astound us with its power and expressiveness. 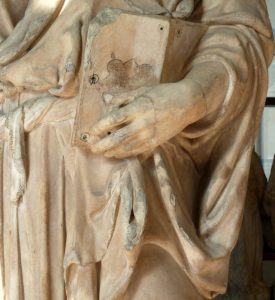 This over-life-size marble, carved from a single, shallow block of stone, portrays the evangelist Saint Mark standing on a pillow, holding a book in his left hand, staring intently into the distance. Rendering a convincingly soft pillow in marble is a testament to the sculptor’s mastery of the material (and perhaps a reference to the patrons, which we’ll get to later).

Apart from this gaze, his face is defined by a long, intricately carved beard whose wavy curves reach down to the base of his neck. The rich folds of the toga he wears convey the expressiveness of fabric—bunching up at his waist, for instance, and falling dramatically around his legs—while also responding to and suggesting the body underneath. Note, for example, how his left knee—slightly forward—pulls at the garment, and how even when the fabric is piled up, as it is on his hip, it manages to convey the body’s physicality. Consider the extraordinary skill in turning hard stone into something that looks like soft, malleable fabric.

Saint Mark’s stance is classic contrapposto—an Italian word loosely translated as “contrasted” or “opposed” and that refers to a naturalistic way of portraying the human form that originated in ancient Greece. Saint Mark supports his weight primarily on his right leg, a point emphasized by the strong vertical lines of the toga over that leg—lines that seem to mimic the fluting on Greek and Roman columns. The saint’s hips are at a slight angle and his left leg, bent at the knee as though about to step forward, is far more relaxed. His upper body is the opposite: the left arm is engaged in holding his book—a reference to his status as one of the authors of the Gospels—while his right arm hangs loosely at his side. The slight curve to the body, and the use of both active and relaxed elements, gives the figure an easy, natural gracefulness that reflects how a human would actually stand, and makes it appear as though the saint is caught in the act of stepping out of his niche.

All of these formal elements—the scale, the expressive carving, the interest in the body, the contrapposto—are aspects we have come to associate as new developments in the art of the early Italian Renaissance.

The commission and setting 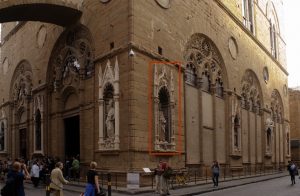 Donatello’s commission for Saint Mark was part of a broader campaign to adorn the exterior of Orsanmichele in Florence, Italy. Orsanmichele is and was a building with both civic and religious importance for Florentine citizens. Though constructed in part as a grain warehouse and used as such for decades, Orsanmichele was also a significant site of pilgrimage and religious devotion, due to the presence of a miracle-working image of the Virgin and Child. Plans to decorate the exterior of the building date back to 1339, when the Silk Guild (the Arte della Seta, then known as the Arte di Por Santa Maria) proposed that they and the other major guilds of Florence adorn the external piers of the building with tabernacles (or niches) and life-sized (or bigger) sculptures of saints. The project was slow to get off the ground—only a few works were completed before it came to a stop—but it was revived in the early fifteenth century. At this point, the city government legislated that the guilds had to decorate their tabernacles within ten years or give up their rights to do so. 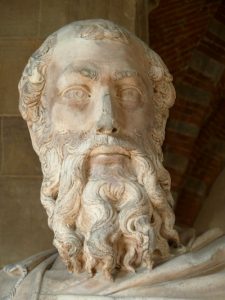 Orsanmichele was so important to the city that a guild’s ability to commission an artwork for it was considered an honor—if an expensive one. Although the legislation wasn’t strictly enforced, it did inspire a flurry of activity and commissions around Orsanmichele—of which Donatello’s Saint Mark was one example, commissioned by the Linen Weavers’ Guild (the Arte dei Linaiuoli). Other noteworthy sculptures from this period include Lorenzo Ghiberti’s Saint John the Baptist, c. 1414 and Saint Matthew, c. 1420, Nanni di Banco’s Four Crowned Saints, c. 1415, and Donatello’s Saint George, c. 1415.

The Orsanmichele projects provided an opportunity for the guilds to compete with each other, each one commissioning a more luxurious or impressive sculpture. Competition of all sorts—between patrons, artists, even art forms themselves—is a consistent theme of the Renaissance, and in the opening years of the fifteenth century this was on display as guilds vied for public attention and praise via their Orsanmichele commissions. For example, the Cloth Merchants’ Guild (the Arte di Calimala) commissioned Ghiberti’s Saint John the Baptist in bronze rather than marble—a far more costly decision intended to show off the guild’s wealth and outdo its rivals.

Unfortunately, all of the original statues on Orsanmichele—fourteen works—have been placed in either the building’s museum or the Bargello museum. The sculptures in the niches are copies. The result is that we can now view Donatello’s Saint Mark at ground level—exactly as he did not intend it to be viewed!

Donatello—whose full name was Donato di Niccolò di Betto Bardi—was born around 1386 in Florence to a middle-class family. He probably trained as a goldsmith as a young man, and eventually spent some time with two of the most important artists of the fifteenth century: Filippo Brunelleschi and Lorenzo Ghiberti. He went with the former to Rome in the opening years of the century, and he spent time in Ghiberti’s workshop from about 1404 to 1407.

By the time of the Saint Mark commission, Donatello had already completed or was at work on several other notable public sculptures, including his marble David (1408-9), Saint John the Baptist (1408-15), and Saint George (c. 1410-15, also for Orsanmichele). These early works—especially Saint John—already exhibit some of the hallmarks of Donatello’s style, including a realism informed by Classical (ancient Greek and Roman) art and a certain psychological intensity. In subsequent decades he would execute original monuments that later generations have come to view as landmarks in Renaissance art: these include the bronze relief of the Feast of Herod for the baptismal font in Siena’s baptistery (c. 1425); the Equestrian Monument of Gattamelata in Padua (c. 1450, the earliest surviving Renaissance equestrian monument); and the Judith and Holofernes (c. 1460), now in Florence’s Palazzo Vecchio. These works had an impact not only on his peers but on later sculptors, as well—including on Michelangelo, who can be considered the High Renaissance artistic heir to Donatello. Thanks to a career that spanned over 60 years of activity (Donatello lived until 1466) and that resulted in radical works for major cultural and artistic centers—including Florence, Siena, Padua, and Rome—Donatello became an artist whose fame and impact equaled if not surpassed that of his teachers.

Giorgio Vasari, Lives of the Artists (1550) on Donatello